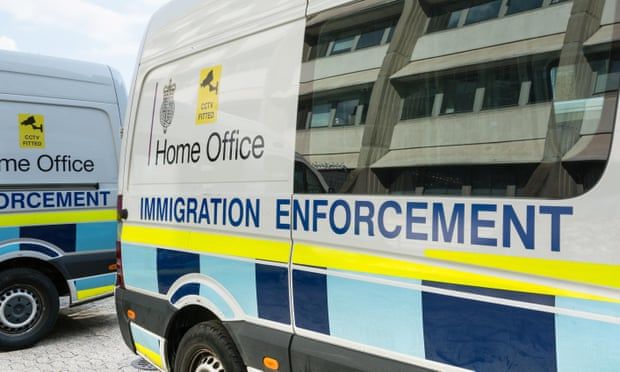 Revealed: just 7% of trafficking victims given leave to remain in UK

Government accused of failing those at risk of falling back into traffickers’ hands in home countries
Only 7% of confirmed victims of trafficking from overseas have been granted leave to remain in the last five years according to new data disclosed to the Guardian.

A Home Office data shows that 447 out of 6,066 confirmed trafficking victims who requested leave to remain between April 2016 and June 2021 were granted it – 7%.

Meanwhile, 4,695 confirmed trafficking victims had their applications for leave to remain in the UK rejected, according to the response to a freedom of information response request by the Scottish Refugee Council (SRC). In the remainder of cases a decision is still pending.

The government has repeatedly pledged to protect trafficking victims. But charities have documented that some of those removed from the UK and returned to their home countries have fallen back into the hands of their traffickers or have been vulnerable to being picked up by new traffickers.

A landmark high court judgment in October 2021 said that all confirmed trafficking victims should be granted leave to remain in the UK. Ahmed Aydeed of Duncan Lewis Solicitors, the lawyer who brought the high court case, expressed concern about the new trafficking data. “Victims of trafficking, experience a profound loss of their sense of safety and security. A reliably safe environment is a pre-requisite for recovery. By refusing, en masse it seems, leave to remain to victims, the home secretary is re-traumatising survivors and putting them at risk of being re-trafficked.”

The SRC says the newly released data is evidence of a system that is failing asylum seekers and victims of trafficking. They have shared the data ahead of the second reading of the nationality and borders bill in the House of Lords on Wednesday. SRC campaigners have urged the Lords to vote down the controversial bill which proposes “offshoring” asylum seekers to third countries while their claims are processed and imposing criminal penalties on asylum seekers who travel across the Channel in small boats to claim asylum in the UK.

The new bill also proposes narrowing the grounds for discretionary leave to remain for trafficking survivors which has led to fears among anti-trafficking campaigners that very few modern slavery survivors will be allowed to remain in the UK.

Graham O’Neil of the SRC said: “There is a real crisis in the chronically slow asylum decision system that awaits them. It entraps women, men and children into state-enforced poverty limbo for years. This is even when they are from high refugee recognition countries like Afghanistan, Syria and Iran. We urge the Lords to dismantle the bill, and for the government to scrap it, and invest in swifter better asylum decisions.”

A Home Office spokesperson said: “A significant proportion of asylum claims in the last year should have been made in a first safe country, rather than people risking their lives making dangerous crossings, facilitated by people smugglers.

“This, as well as an overall increase in claims, has led to asylum applications taking longer to be resolved and impaired our ability to focus resources on those who come to the UK via safe and legal routes and are in genuine need of our protection.

“The government is committed to tackling modern slavery and providing support and protection to the victims of this heinous crime. The nationality and borders bill will go further than ever before in putting modern slavery victims’ rights into law, including granting temporary leave to remain for victims.”
#Afghanistan
Add Comment