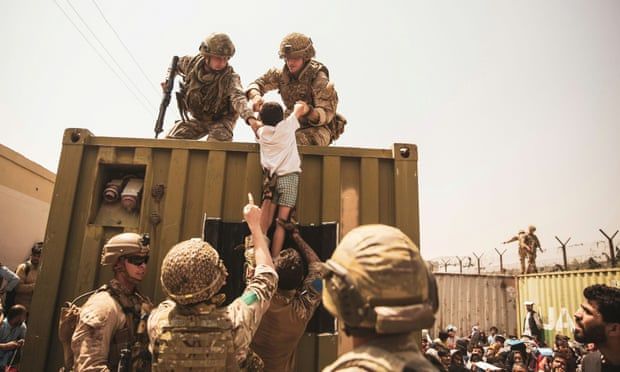 Revealed: Afghan journalists facing death threats and beatings, despite UK pledge to save them

Having fought in vain for clearance to come to the UK since the return of Taliban rule last summer, the eight journalists are now taking legal action against the government. They have applied for a judicial review after waiting months for their applications to relocate to the UK to be processed. They report only receiving standard response emails from the Afghan Relocations and Assistance Policy (Arap) programme.

Members of the group told the Observer they had worked with British media, reporting on operations against the Taliban, programmes to rebuild Afghanistan’s infrastructure, the rights of women and the fight against the drugs trade. They said that since the Taliban’s takeover, they had received warnings that they were being targeted.

In the chaos of last summer’s evacuation from Kabul, the government announced that it was issuing special visa waivers for Afghan journalists who had worked with UK media, and their families. The then foreign secretary Dominic Raab said at the time: “We must protect those brave Afghan journalists who have worked so courageously to shine a light on what is really going on in Afghanistan.” The government also said relocation cases could be expedited if there was an “imminent threat to life”.

One of the group, Abas*, worked with the UK media over many years, and had hoped to come to the UK months ago. But nine months after the Taliban stormed back to power, he remains trapped and at serious risk.

Having faced attempted kidnap and shootings, he now regularly moves location and lives separately from his family for their safety.

With tears rolling down his face, he told how he sees his wife and children only every few weeks, to get fresh clothes and money. “I’m in a kind of trauma,” he told the Observer. “There is a group of us that the UK government must help. I haven’t had a single night without concern at home with my family.”

Once, Abas was shot at while sitting in a garden. On another occasion, a car pulled up and men with covered faces got out and began to beat him. “They beat me around the head – my body was full of blood,” he said. “I don’t know how they didn’t drag me in the car – I think others helped me.”

He has also had messages threatening him for having worked with foreign media. “They said, ‘we already have a decree to kill you’. I think I’m on the target list of those people and maybe one day they will find me.”

“Unfortunately, we already are under very serious threats. We don’t want to wait until 2024 to get out. I have no sleep. Day by day, my sleep is reducing. Nowadays, it’s two hours, three hours – nothing else. Another journalist in the group, Bidar*, said he has effectively become a refugee as a result of his connections with overseas media. Family members have been attacked. He too believes he is on a Taliban hitlist.

“The Taliban and other extremists are openly talking against those who are affiliated to the UK media,” he said. “They say we are spies. The Taliban have sent me warnings. That’s why I tried many times to convince UK officials to help me relocate. The UK government promised that those who were affiliated with the UK media would be eligible. What happened that they forgot us and don’t hear our voices?”

The legal action comes just days after the foreign affairs select committee described Britain’s chaotic withdrawal from Afghanistan last summer as a “disaster”. At the time of the withdrawal, the Observer revealed that many pleas for help to the government went unread, including cases highlighted by senior MPs.

Erin Alcock, the Leigh Day lawyer representing the group, said: “A promise was made in August that Afghan journalists who worked for British media organisations, facing imminent threat, would be relocated to the UK. Not only has that promise not yet been fulfilled, but nine months on, our clients have had no indication of when they will even receive a response.”

It is understood that government officials have been unable to identify formal applications from some of the group. A spokesperson said: “We cannot comment on individual Arap applications … However, since the scheme began, we have relocated over 9,200 applicants and their dependents to the UK. This scheme remains open and … we are progressing applications as quickly as possible.”
#Dominic Raab  #Afghanistan  #Raab
Add Comment