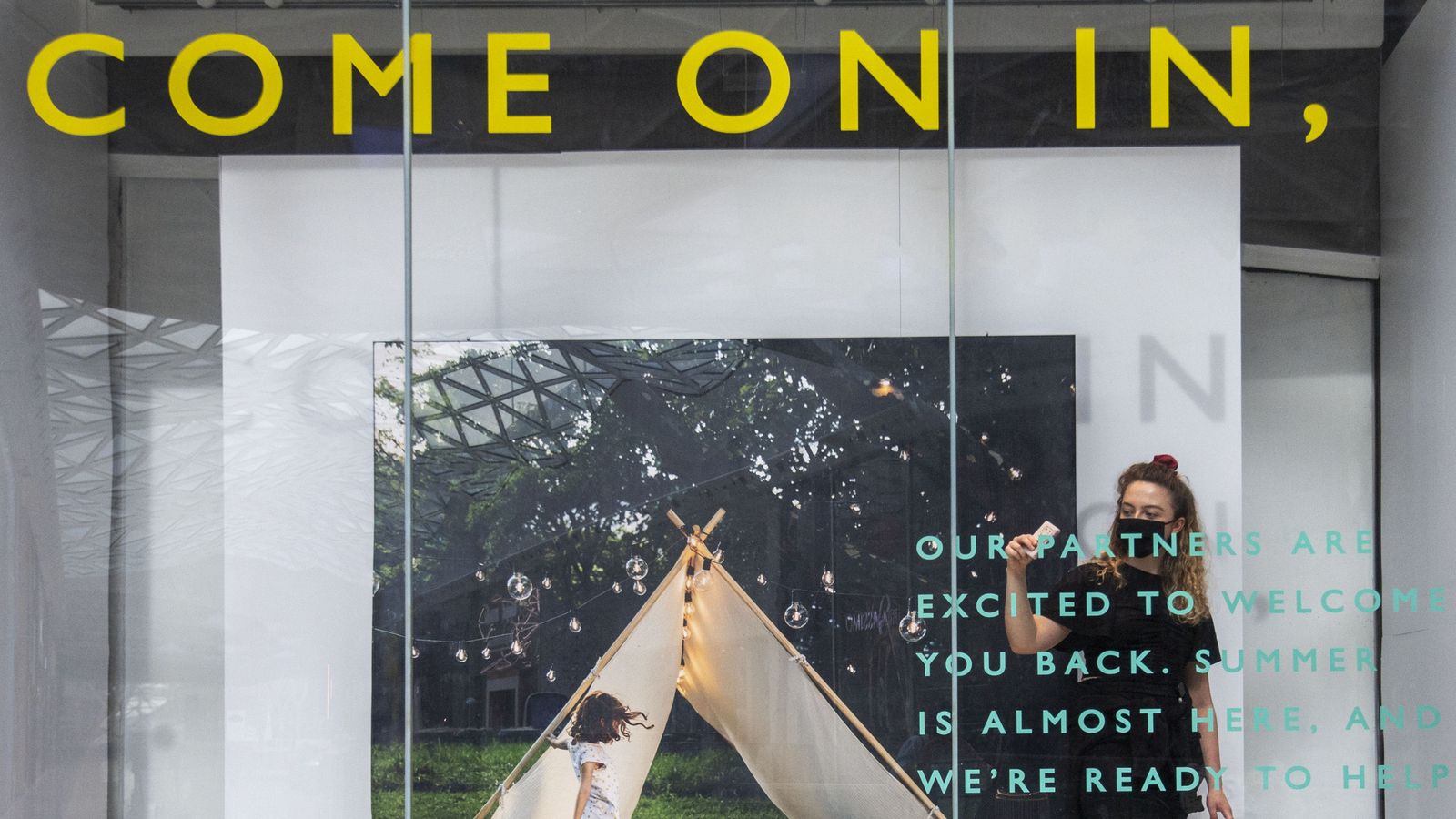 The data, coupled with a closely-watched reading of consumer confidence, prompts a dive in the value of the pound and places the Bank of England in a tricky position as it decides whether to hike interest rates for a fourth consecutive time.

The pound has fallen sharply after several pieces of data raised fears of a slump ahead for UK economic growth, driven by surging inflation.

The market mood turned ugly when the Office for National Statistics (ONS) reported a 1.4% monthly decline in retail sales in March, led by a big drop in demand for online purchases.

There was little sign for optimism among retailers, except for the owners of garden centres and DIY shops, though the data did suggest that COVID-weary consumers shifted discretionary spending towards hospitality and attractions instead as the weather improved.

Economists had expected a 0.3% decline in sales month-on-month - and sterling dived by more than 1.5 cents against the dollar, to an 18-month low of $1.28, as investors fretted over the prospects for economic growth ahead. 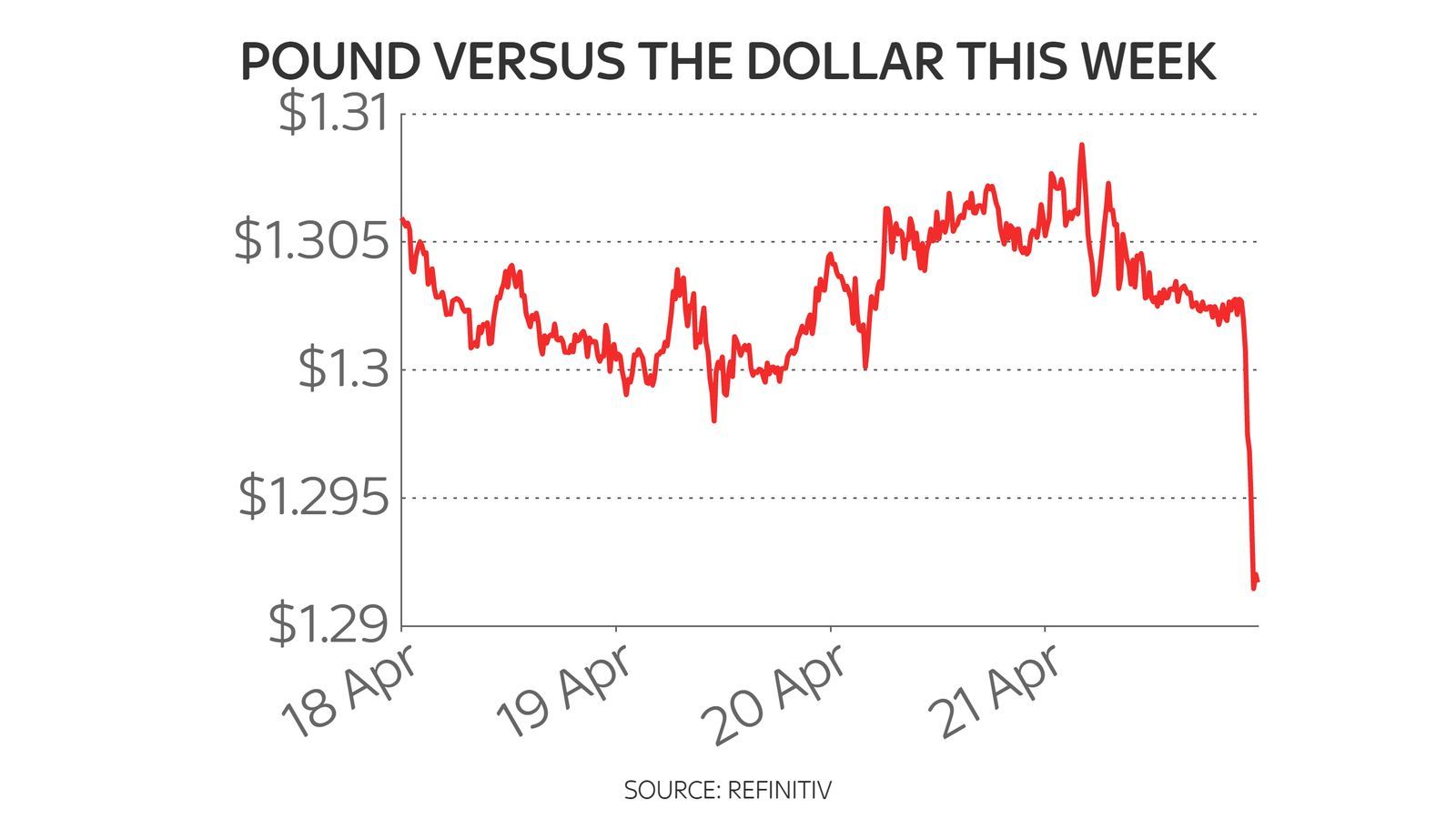 The UK currency was also more than one cent off against the euro.

Adding to the gloom was data from a survey of purchasing managers showing the slowest rise in private sector output for three months in April - with record inflationary pressures and war in Ukraine hitting demand.

It suggests that consumer spending, the biggest contributor to the UK's GDP, is at risk of being choked off as families fret over rising bills for everyday goods and services.

ONS Director of Economic Statistics Darren Morgan said of the retails sales data: "Retail sales fell back notably in March with rises in the cost of living hitting consumers' spending.

"Online sales were hit particularly hard due to lower levels of discretionary spending.

It all makes for worrying reading at the Bank of England.

The GfK consumer confidence index, derived from a survey, came in at -38 - worse than economists had expected and just shy of the all-time low seen in 2008 as the global financial crisis was gathering pace.

The responses were registered at a time when we learned that inflation had hit a 30-year high of 7%.

It is forecast by the Office for Budget Responsibility to climb above 9% after the unprecedented surge in the energy price cap in April - and rises in other household bills such as mobile, water and broadband are reflected in the calculations.

The price cap is currently expected to rise further - by up to £500 - in October when the additional effects of Russia's invasion of Ukraine are included, while the retail sector expects price rises to intensify throughout 2022.

All the data will be taken into account by rate-setters at the Bank, who have signalled more caution on rising rates ahead after lifting Bank rate to 0.75% at their last meeting.

They will be anxious not to choke off economic growth through rising interest rates, which are intended to stop rising inflation expectations, such as wage hikes, rather than rising prices as the inflation has been caused by factors outside their control including energy and food costs.

Inflation, while not demand-led, is nevertheless proving more sticky and persistent than policymakers had expected and financial markets still forecast a 0.25% rate hike at the next meeting of the monetary policy committee in two weeks' time.

That is because the inflationary fires have been stoked by Russia's war against Ukraine.

However, Bank governor Andrew Bailey admitted on Thursday that policymakers were walking a tight line between tackling inflation and avoiding recession.

That is because raising borrowing costs to help ease inflationary pressures could prove counterproductive with millions of mortgage holders - those on tracker or standard variable deals - already paying more.

Russ Mould, investment director at AJ Bell, said of the situation: "The ONS' retail sales data is a wake-up call that life is going to be tough for shops - virtual or physical - in the coming months.

"Once those vastly increased energy bills hit the doormat and households take time to reassess their financial situation, there is every chance that retail sales could get even worse," he wrote.