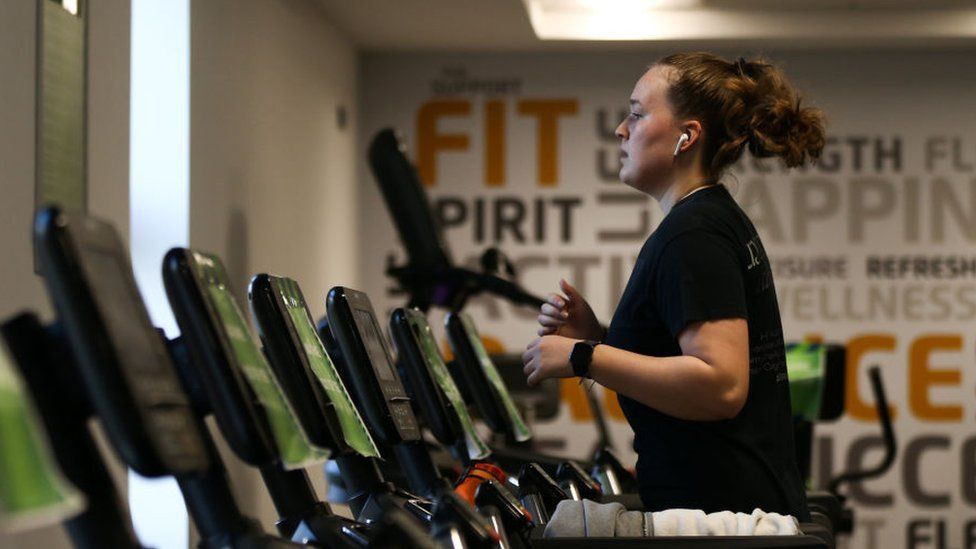 Fitness fans took part in millions of workouts in the week after lockdown restrictions eased in England.

The chain PureGym said that more than one million workouts took place across the 240 sites that had reopened.

David Lloyd Leisure also told the BBC that footfall in its clubs in England had been "extremely positive".

But the boss of trade body UK Active warned that its members had suffered huge losses in lockdown and called for government support.

On Tuesday, PureGym revealed an "awful" 92% crash in annual profits to £11m due to Covid lockdowns.

Revenues slumped by nearly 40% as its UK gyms were shut for half of the year's trading days.

But the discount gym chain said tens of thousands of new members have joined since restrictions eased in England.

Its chief executive Humphrey Cobbold said: "Whilst the financial trading performance was frankly awful, that was out of our hands."

He added: "We are more than satisfied with the recent reopening in England, which included 10 brand new sites.

"Member response and new joiners support our view that underlying demand for gyms is strong."

Mr Cobbold told the BBC in February that it was burning about £500,000 a day on average over eight months of closure.

PureGym has since reopened gyms in 240 locations in England and 40 in Switzerland as restrictions have begun lifting. Those in Scotland are set to reopen in April, with Wales and Northern Ireland due to follow in May.

David Lloyd Leisure clubs told the BBC that footfall had been "extremely positive" across its gyms, pools and outdoors exercise classes in England since 12 April.

A spokeswoman said there was a "strong indication that members are committed to getting back to their fitness routines".

"Feedback from those who have returned has been incredibly positive, not just for the facilities operating in a Covid-secure manner, but also the chance to reconnect".

Huw Edwards, chief executive of industry body UK Active, said: "It's great to see so many people returning to their local gyms, pools and leisure centres, which proves how essential these facilities are to our communities and how greatly they've been missed.

"However, our members suffered huge losses during lockdown and were closed during their busiest months, so thousands of facilities still require greater financial and regulatory support in order to recover."

He pointed out that about 400 sites across the UK had been forced to close permanently because of the pandemic, while others may suffer if their business model relies on indoor classes, which are not permitted until 17 May in England.

"Now is the time for the government to support our sector for our future health and wellbeing," he said.