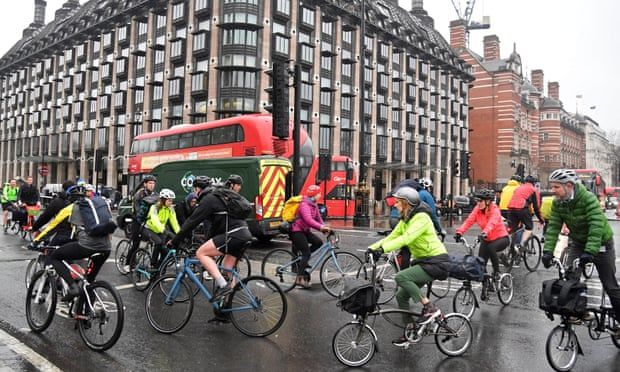 Reform cycle to work scheme so it can be used by lower-paid, Sunak urged

Introduced more than 20 years ago and since used by more than a million people, the scheme allows users to pay for a bicycle and accessories in instalments taken from their salary on a tax-free basis, thus saving them between 25% and 40%.

But longstanding rules mean it is not available to people earning minimum wage, or close to it, or who do not pay tax on a pay-as-you-earn salaried basis.

In a letter being sent on Monday to the chancellor, Rishi Sunak, groups including the Federation of Small Businesses, the Co-op and British Cycling, have called for this to be changed, arguing that amid rising prices those on lower incomes are most in need of the chance to save money on travel.

“The least well paid in our communities are feeling the effects of soaring inflation to a greater extent than those on higher wages, with the rising cost of commuting only adding to their concern,” the letter says.

“They often have no option to do their job from home and are forced to commute to a place of work. The cycle to work scheme has the potential to open up equitable access to cycling and provide a cost-effective solution for many workers within this group. The scheme is a proven mechanism at getting more people cycling, and we believe those on the lowest incomes should benefit too.”

People who are self-employed represented more than 13% of the UK labour market, the letter added, a proportion that was expected to grow, and were also unfairly excluded, it added.

Data collected by the Cycle to Work Alliance, made up of the five biggest bike providers under the scheme, including Halfords and Evans Cycles, shows it has become more in demand because of changing travel patterns during the Covid crisis, especially for key workers.

At the peak of the pandemic, from March to September 2020, alliance members recorded a 60% rise in people using the scheme against the same period in 2019, with even steeper increases for staff from the London ambulance service and Metropolitan police.

Expanding the scope of the scheme would help deliver the government’s commitment to get more people cycling, the letter argued, and to prevent post-Covid travel patterns from becoming more car-dominated.

Currently, the scheme does not allow people to sign up if the contributions from their salary for the bike would take them below the minimum wage, even if a switch to bike commuting might still mean a net saving.

The alliance has pledged that if the change was made, retailers would ensure applicants had properly calculated the cost, and were told if their net salary would now be below the minimum wage.

The change is backed by Labour. Gill Furniss, the shadow roads minister, said: “There is no path to net-zero without green transport and it is vital ministers do more to encourage people to cycle to work, increase access and take-up of this popular scheme.”

Paul Caudwell, the health wellbeing manager at the Co-op group, said it was wrong that lower-paid staff were denied access to the scheme: “I believe that the legislation must change to allow a salary sacrifice arrangement to be able to reduce pay below the national minimum wage. This would make the incentives for using a salary sacrifice scheme more equitable for all of our colleagues and increase take-up of our cycle to work scheme.”