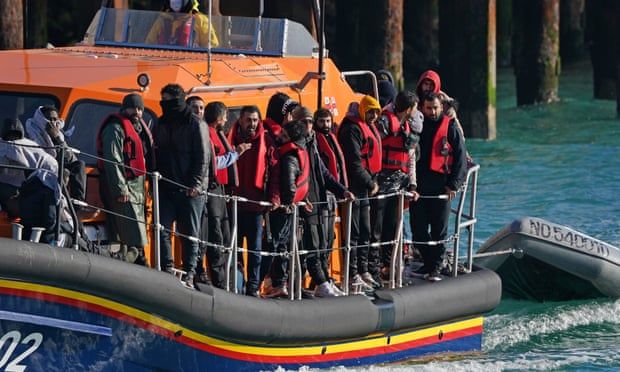 Figures will prompt concern in No 10 and Home Office after pledges to curb numbers entering country
The number of people crossing the Channel by small boats in a single day reached a record number for this century on Wednesday, eclipsing the daily arrival figures during the summer.

Despite the low November temperatures, at least 853 people came to the UK, the Home Office confirmed. The figure surpasses the previous daily record of 828 set in August.

They come after a week of fatalities for those trying to leave France for the UK. A train struck and killed a person from Eritrea near Calais and at least two bodies were recovered from the sea and a beach.

The Home Office confirmed on Friday that the UK authorities rescued or intercept 853 people in 25 incidents. French authorities said two people died this week while attempting the journey and several more were feared lost at sea last week.

Bridget Chapman, a case worker at Kent Refugee Action Network, which helps young refugee and asylum seekers, said recent rivals may have made the crossing on Wednesday because of clear weather and because of their increasingly desperate plight in France.

“It was a cold but calm day to cross the Channel, followed by bad weather. We also hear that the conditions in Calais for people living rough are getting worse – French police beat young men and break up roadside encampments,” she said.

The figure has been surpassed on previous occasions when local people in Kent welcomed refugees. During a single day in mid August 1914, around 16,000 Belgian refugees landed in Folkestone Harbour, doubling the number of people in the coastal town.

Speaking of the Calais train incident, Franck Dhersin, a regional vice-president for transportation in the Hauts-de-France region, told the French broadcaster BFM-TV they were among a group of migrants walking along the tracks in heavy rain and after dark, making it hard for the train driver to see them.

As well as the fataility, one person is in a critical condition after the incident on Thursday evening and two others sustained minor injuries, according to Dhersin.

Dhersin, also a village mayor near the coastal town of Dunkirk, said dozens of migrants were arriving daily in the area. He appealed for help, saying: “We feel abandoned by the government.”

More than 21,000 people have made the crossing to the UK so far this year, more than double the total for the whole of 2020. Campaigners and aid charities have repeatedly called on ministers to overhaul the asylum system in light of the soaring numbers.

The Maritime Prefecture of the Channel and the North Sea said one person was found dead on the beach at Wissant, near Calais, on Thursday morning after the discovery of a boat filled with water.

Two other people found with them were suffering from hypothermia, and were treated by emergency services and taken to hospital.

Another person died attempting the crossing on Wednesday, said French authorities, who had carried out a rescue mission in the strait of Pas-de-Calais. It is believed they were unconscious when they were pulled from the water and pronounced dead as rescuers returned to shore. Another person has been reported as missing.

Two men – both Somali nationals – were rescued off the Essex coast near Harwich on 25 October and searches for any possible remaining survivors have been called off.

Refugee charities have pointed out that people seeking asylum have no choice but to take extreme and dangerous journeys to find safety in the UK.

In 2019, the home secretary, Priti Patel, promised to make migrant crossings an “infrequent phenomenon” by spring 2020 and pledged in August last year to “make this route unviable”. During this time, the government has agreed to pay France tens of millions of pounds to increase security on its northern coast.
#Priti Patel
Add Comment