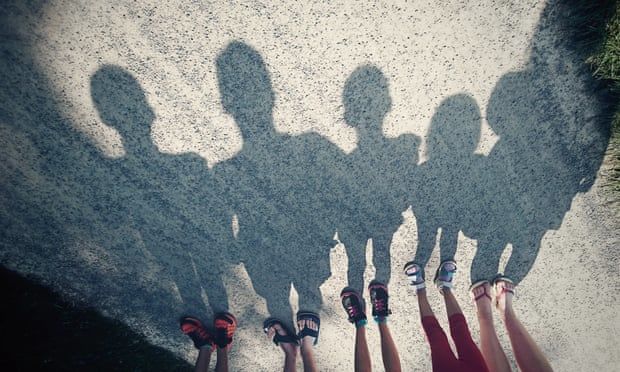 More than 400,000 children and young people a month are being treated for mental health problems – the highest number on record – prompting warnings of an unprecedented crisis in the wellbeing of under-18s.

Experts say Covid-19 has seriously exacerbated problems such as anxiety, depression and self-harm among school-age children and that the “relentless and unsustainable” ongoing rise in their need for help could overwhelm already stretched NHS services.

Mental health charities welcomed the fact that an all-time high number of young people are receiving psychological support. But they fear the figures are the tip of the iceberg of the true number of people who need care, and that many more under-18s in distress are being denied help by arbitrary eligibility criteria.

“Open referrals” are under-18s who are being cared for by child and adolescent mental health services (CAMHS) or are waiting to see a specialist, having been assessed as needing help against treatment thresholds. GPs, teachers and mental health charities believe the criteria are too strict, exclude many who are deemed not ill enough, and amount to rationing of care. 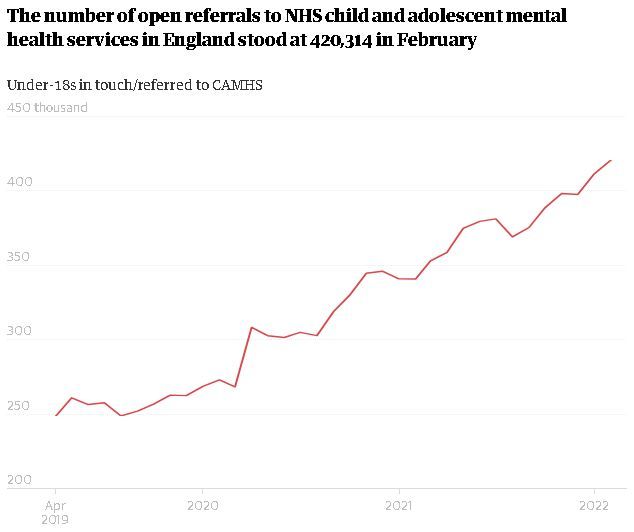 While it was positive that more and more under-18s are receiving psychological support, he said, “the rise in the number of young people seeking help from the NHS is relentless and unsustainable. Over the past two years young people have experienced isolation, disruption to their education and reduced access to support, including from counsellors and GPs. All of these things have massively impacted their mental health, but these figures are only the tip of the iceberg and will continue to rise.”

He said many young people were reaching crisis point before could get the treatment they need.

Evidence from the children’s commissioner for England has shown that while help from CAMHS is available within six days of being referred in certain areas, in other places families have to wait for as long as 81 days before their child is seen, despite some having self-harmed or had suicidal thoughts.

A survey of GPs published last month by the youth mental health charity stem4 found that half said CAMHS were rejecting half of referrals they made of under-18s suffering from anxiety, depression, conduct disorder and self-harm because their symptoms were not seen as severe enough. In one case a 12-year-old boy found with a ligature in his room was refused help because there were no marks on his neck.

Nihara Krause, a consultant clinical psychologist and the founder of stem4, said that while more under-18s were getting help, it was unclear from the figures how many received effective treatment. “Teachers and GPs say that children and mental health in mental health distress are either being rejected in record numbers because their difficulties do not meet the high threshold for treatment, or they are stuck on long waiting lists. These latest figures also lack any real detail to warrant claiming there has been a marked improvement in accessing effective treatment. They just show greater need.”

She said not just the prevalence but also the severity and complexity of youth mental health problems had increased in recent years. In addition, Covid-induced loneliness, increased time spent online, disrupted routines and exposure to family stress have increased levels of distress.

Catherine Roche, the chief executive of Place2Be, which provides counselling to 450 primary and secondary schools across the UK containing 250,000 pupils, said: “What we’ve seen across our frontline services in UK schools is rising numbers of young people struggling with anxiety, self-harm, eating difficulties and suicidal thoughts.”

A survey of school heads and other staff by Place2Be and the National Association of Head Teachers published in February found that large majorities had seen increases in mental health problems among pupils since the start of the academic year, including low self-esteem (86%), depression (76%) and sustained feelings of anger (68%).

Roche urged the NHS to provide many more early intervention services to support troubled young people as soon as they exhibit signs of distress, before their mental health deteriorates.

Claire Murdoch, NHS England’s national mental health director, said: “The toll of the pandemic has inevitably had an impact on the nation’s mental health, with more young people than ever before accessing NHS services. As these figures show, demand continues to skyrocket, with a third more children treated in February this year compared to February 2020.”

She said the NHS had responded by expanding mental health teams in 4,700 schools and colleges and setting up 24/7 mental health crisis telephone support services for all ages, which now receive 20,000 calls a month.

The NHS data also shows that mental health bed shortages mean some under-16s who are sick enough to be admitted for mental health care are having to be treated on adult mental health wards, despite guidance saying that should never happen. In February an unspecified number of under-16s had spent 50 days on adult wards.