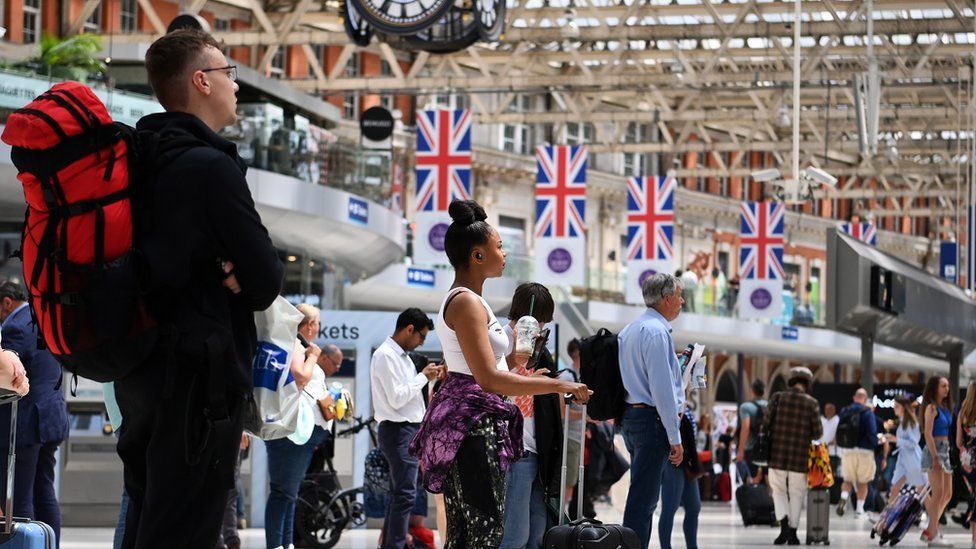 A series of strikes set to hit the rail network next week will "punish millions of innocent people", Transport Secretary Grant Shapps has said.

He said commuters and pupils taking exams would be among those affected.

But the Rail, Maritime and Transport union (RMT) said politicians had prevented progress in talks.

Strikes will take place on almost all major lines across Britain on Tuesday, Thursday and Saturday, as well as on the London Underground on Tuesday.

There will also be knock-on effects on services on non-strike days, including Monday.

Speaking to BBC Radio 4's Broadcasting House programme, the RMT's Mick Lynch claimed rail operators were refusing to sit down for discussions, while Network Rail was being influenced by government ministers.

"It's Shapps, [Boris] Johnson and Rishi Sunak who are stopping a deal being done in this dispute," he said.

But Network Rail, which maintains the tracks and runs larger train stations, said the RMT were dismissing talks before they had finished.

And Mr Shapps urged the union to back down to help those who rely on the rail network.

He said: "Many people who do not get paid if they can't get to work face losing money at a time they simply can't afford to.

"Children sitting exams will face the extra distraction of changing their travel plans.

"And vulnerable people trying to attend long-awaited hospital appointments may have no choice but to cancel.

"By carrying out this action the RMT is punishing millions of innocent people, instead of calmly discussing the sensible and necessary reforms we need to make in order to protect our rail network."

*  £16bn - the amount of taxpayer Covid support given to the rail industry, according to government

*  2,500 - proposed job cuts planned at Network Rail, according to the RMT - Network Rail says it would never consider any changes that make the railway less safe

The RMT - which has 40,000 members across the rail network - has said its members are unhappy about stagnated pay and proposed job losses.

Mr Lynch denied the union was demanding a pay hike in line with the current RPI inflation rate - which was 11.1% in April - but said any proposed rise must reflect the higher cost of living.

He said the union had rejected a Network Rail offer of a 2% rise with a further 1% increase linked to job cuts. The RMT recently won an 8.4% pay rise on the London Underground, it said.

"We've got a working class, working full-time hours, having to go to food banks and take state benefits," Mr Lynch added, saying the union did not want to see rail workers in a similar position.

On Saturday, thousands of people marched in central London to demand action from the government on the cost of living crisis.

Meanwhile, Labour leader Sir Keir Starmer is set to use a speech at a Labour event in Warwick to suggest Mr Shapps and Prime Minister Boris Johnson want the strikes to go ahead.

"They want the country to grind to a halt so they can feed off the division," he will say.

"Instead of spending their time this week around the negotiating table, they are designing attack ads."

But Mr Shapps accused Sir Keir of dishonesty over his public statements about the upcoming strikes.

The transport secretary shared an article in the Mail on Sunday which claimed Sir Keir was supportive of the strikes at a Labour Party meeting.

"Not bothering to avert a crisis is a sackable offence in any other work place," she said.

A Department for Transport spokesperson said: "The government committed £16 billion - or £600 per household - to keep our railways running throughout the pandemic while ensuring not a single worker lost their job.

"The railway is still on life support, with passenger numbers 25% down and anything that drives away even more of them risks killing services and jobs.

"Train travel for millions more people is now a choice, not a necessity. Strikes stop our customers choosing rail, and they might never return."