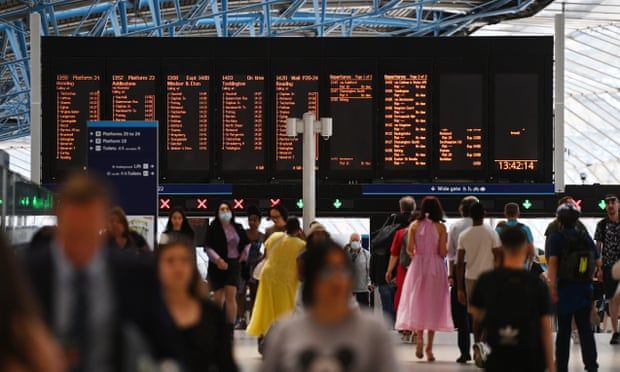 Rail and tube strikes to go ahead next week, RMT union confirms

Strikes on railways confirmed for Tuesday, Thursday and Saturday, and on tube network on Tuesday

Britain’s biggest rail strike in more than 30 years will begin next Tuesday, causing almost a week of disruption to train services.

The Rail, Maritime and Transport workers’ union (RMT) confirmed on Saturday that talks have failed to resolve a bitter row over pay, jobs and conditions, meaning that strike action will go ahead.

Three 24-hour strikes at Network Rail and 13 train operators are planned on Tuesday, Thursday and Saturday, as well as on London Underground on Tuesday. About 40,000 workers are expected to take part.

Despite discussions over the past few weeks with senior representatives from Network Rail, train operators and London Underground, the RMT says it has not been able to reach a “viable” settlement.

Its general secretary, Mick Lynch, said: “Despite the best efforts of our negotiators, no viable settlements to the disputes have been created.”

“It has to be restated that the source of these disputes is the decision by the Tory government to cut £4bn of funding from our transport systems – £2bn from national rail and £2bn from Transport for London.

“As a result of this transport austerity imposed by the government, the employing companies have taken decisions to savage the railway pension scheme and the Transport for London scheme, cutting benefits, making staff work longer, and poorer in retirement, while paying increased contributions.”

A special timetable will be in operation from 20 to 26 June. Several operators have already warned passengers not to attempt to travel on strike days.

Lynch added that thousands of jobs were being cut across the rail networks and that workers faced below-inflation pay rises.

“In the face of this massive attack on our people, the RMT cannot be passive,” he said. “So today, having heard the reports on the discussions that have been taking place, we are confirming that the strike action scheduled to take place on 21, 23 and 25 June will go ahead.

“We want a transport system that operates for the benefit of the people, for the needs of society and our environment – not for private profit. We call on the entire labour movement and the working people to rally to the support of the RMT and our members in this struggle.”

A Rail Delivery Group spokesperson said: “No one wins in the event of a strike. The action next week will affect the millions of people who use the train each day, including key workers, students with exams, those who cannot work from home, holidaymakers and people attending important business and leisure events.

“Working with Network Rail, our plan is to keep as many services running as possible, but significant disruption will be inevitable and some parts of the network will not have a service, so passengers should plan their journeys carefully and check their train times.”

The Department for Transport said it was “hugely disappointing” that the strikes were going ahead. A spokesperson said: “The government committed £16bn to keep our railways running throughout the pandemic while ensuring not a single worker lost their job. The railway is still on life support, with passenger numbers 25% down, and anything that drives away even more of them risks killing services and jobs.

“Train travel for millions more people is now a choice, not a necessity. Strikes stop our customers choosing rail, and they might never return.

“We urge the RMT to reconsider so we can find a solution that delivers for workers, passengers and taxpayers alike.”

A Network Rail spokesperson said: “Yet again the RMT union is dismissing talks before we’ve even finished, with more planned for tomorrow.

“We’re serious about trying to find a solution and work out a compromise that gives our people a decent pay rise, but it has to be affordable for taxpayers and farepayers.”

Network Rail said it would continue to try to find a way to avert the strike.