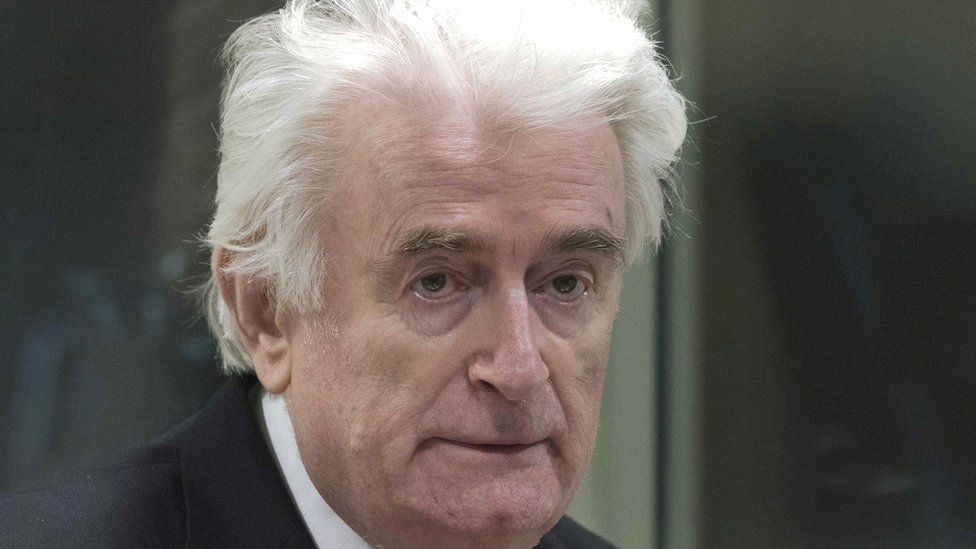 The Foreign Office said he would be transferred to a UK prison from a UN detention unit in the Netherlands.

Karadzic, 75, was also found guilty at his 2016 criminal tribunal of war crimes and crimes against humanity.

His original 40-year sentence was increased at an appeal hearing in 2019.

His conviction for genocide related to his responsibility for the murder of more than 7,000 Muslim men and boys at Srebrenica in 1995.

It was considered one of the worst massacres in Europe since World War Two.

Judges at the International Criminal Tribunal for the former Yugoslavia also held Karadzic responsible for the siege of Sarajevo, a campaign of shelling and sniping which lasted more than three years and led to the deaths of an estimated 10,000 civilians.

Foreign Secretary Dominic Raab said: "Radovan Karadzic is one of the few people to have been found guilty of genocide...

"We should take pride in the fact that, from UK support to secure his arrest, to the prison cell he now faces, Britain has supported the 30-year pursuit of justice for these heinous crimes."

Mr Raab described Srebrenica as "the darkest moment in European history since the Holocaust".

"I think we have got a moral duty and I think we have a sense of national purpose in trying to hold to account the perpetrators of the very worst crimes," Mr Raab said.

"Back since Nuremburg [the trials of Nazi leaders in the German city after World War Two] we have played that role."

He added: "If we want to deter these kind of crimes from happening, if we want to give justice to the many thousands of victims, I think it is right we do our bit."

The UK was one of the signatories to enforcement agreements with the United Nations for sentences passed by its tribunals related to the former Yugoslavia.

UN officials confirmed they had asked the UK to "enforce the sentence".

They did not provide a date for the move but said "all necessary measures" should be taken "to facilitate Karadzic's transfer... as expeditiously as possible". 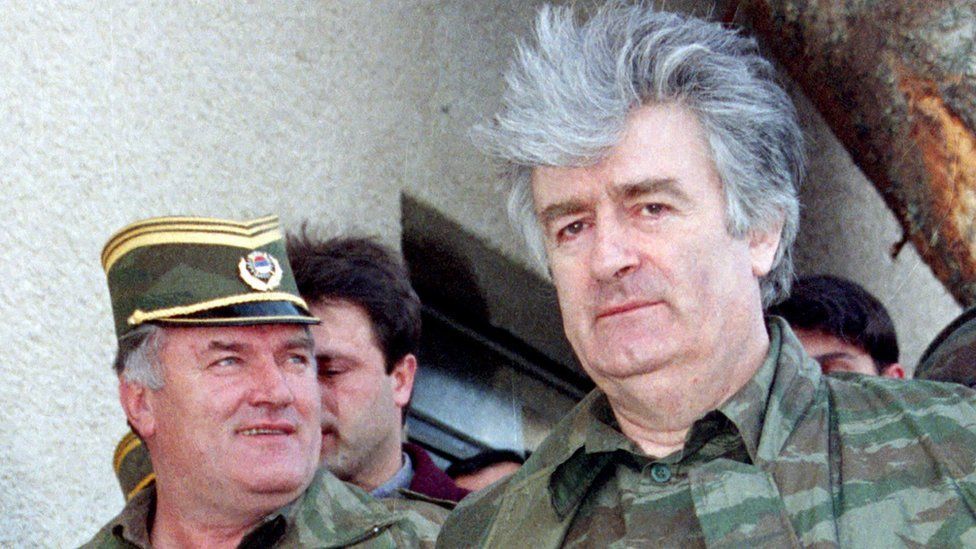 The conflict in the former Yugoslavia stemmed from tensions among ethnic groups, following the death of President Tito in 1980.

Calls for more autonomy led in 1991 to declarations of independence in Croatia and Slovenia and fighting with the Serb-dominated Yugoslav army.

Bosnia, with a complex mix of Serbs, Muslims and Croats, was next to try for independence. Bosnia's Serbs, backed by Serbs elsewhere in Yugoslavia, resisted.

Karadzic, a former psychiatrist, was president of the Bosnian Serb entity Republika Srpska during the Bosnian War in the 1990s.

After the war, he hid for years - masquerading as an expert in alternative medicine - before his eventual arrest in Serbia in 2008.

In November 2017, former Bosnian Serb army commander Ratko Mladic was sentenced to life in prison on similar charges of war crimes and genocide. A ruling in an appeal against his conviction is to be announced next month in The Hague.

Britain was involved in the hunt, trial and conviction of Radovan Karadzic. And now it is taking responsibility for enforcing the sentence handed down to him.

British intelligence played a role in his capture in Belgrade in 2008 after 13 years on the run. British judges and lawyers were involved in the trial against him at a United Nations tribunal that the UK helped to set up.

One of the young lawyers who drafted the legal procedure to transfer Karadzic to the UK was a certain Dominic Raab, who is now the Foreign Secretary - and who ultimately agreed to the request from the UN that the former Bosnian Serb leader should serve out his term in a British jail.

Officials say the reason the UK agreed is because it is on the list of UN members willing to detain those found guilty of global crimes, and it wished to show its continued support for the international rules-based order.

The UK will bear the costs of Karadzic's detention but any decision about whether he is released before his death would be a matter for the UN authorities in The Hague.

Karadzic will not be the first foreign national convicted of war crimes to have been held in a UK prison.

Five men convicted of war crimes by the tribunals for the former Yugoslavia have been sent to British high-security prisons in the past.

They included former Bosnian-Serb general Radislav Krstic, who was stabbed by three Muslim prisoners at Wakefield jail in 2010 in apparent retaliation for Srebrenica.

Krstic was moved to a prison in Poland in 2014.

The UK had also offered to jail the former President of Yugoslavia, Slobodan Milosevic, when he was on trial in The Hague on charges of war crimes and genocide. But he died in 2006 before the legal proceedings were completed.

In a separate arrangement, ex-Liberian President Charles Taylor is serving a 50-year war sentence in the UK following a war crimes conviction by a UN-backed special court, for aiding rebels who committed atrocities in Sierra Leone during its civil war.