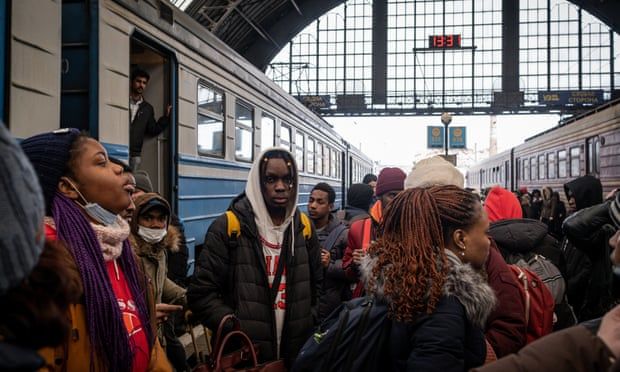 Two weeks ago, Alani Iyanuoluwa fled Kyiv as the Russian invasion intensified. Making her way across Europe, the 24-year-old hoped to be reunited with family in London. Yet for 10 days she has been stranded in a French port – because she is Nigerian.

Iyanuoluwa is among a growing number of refugees who claim the British government is ignoring black people who fled Ukraine.

Their experiences have again raised the issue of race and the UK’s welcome to refugees, prompting claims that ministers would never have unveiled last week’s humanitarian sponsorship scheme for Ukrainians had it not been aimed at white Europeans.

Critics say that while Michael Gove’s scheme places no limit on numbers, it contrasts sharply with the government’s visa scheme for Afghans, which promised spaces for just 5,000 people in the first year. When the scheme finally opened in January, it emerged that most of those spots would be taken by Afghans already living in Britain.

A previous sponsorship scheme, launched in 2015 and largely for Syrian refugees, has been hampered by bureaucracy, managing about 700 placements in seven years compared with Gove’s promise of “tens of thousands” for Ukrainians.

Alba Kapoor, senior policy manager at the Runnymede Trust, said the UK’s response to the Ukrainian crisis had thrown up questions of parity amid claims that black people fleeing the conflict tended to be “dehumanised” and viewed as African migrants rather than Ukrainian refugees. “There’s an obvious question, which is why people of colour who are fleeing war and terror and persecution do not have the right to equal treatment to others,” she said.

“We are still confronted by an inability to properly conceive people from the global south as humans if they are trying to flee war and persecution. That’s a sad place to be – it’s not just the government, but also the press.”

Kapoor said no Alan Kurdi moment – the Syrian boy photographed lying dead on a Turkish beach in 2015 – had been needed to galvanise support for refugees fleeing the fighting.

Jabeer Butt, chief executive of the Race Equality Foundation, said: “Devastatingly, race has undoubtedly been an issue in the level of support provided by the UK government for refugees from Ukraine compared with those from Afghanistan and other places that have faced terrible conflict in recent years.”
Advertisement

The government’s preoccupation with viewing refugees on the basis of where they came from needed to be re-examined. “We cannot blindly accept a tiered system whereby people’s needs are prioritised based on nationality. This feels like being asked by the government to accept that in Britain we value the lives of people with a certain skin colour over others,” he said.

Iyanuoluwa is staying with two other Nigerian students in Boulogne-sur-Mer. All three fear returning to Nigeria because of the dangers of kidnapping and trafficking, but say that as non-Ukrainian nationals they are not eligible for the British schemes, despite two of them having family in the UK.

“We’re coming from war and they are telling us that without a Ukrainian passport we can’t come to the UK, but the UK should consider all residents living in Ukraine when the war started,” she said. 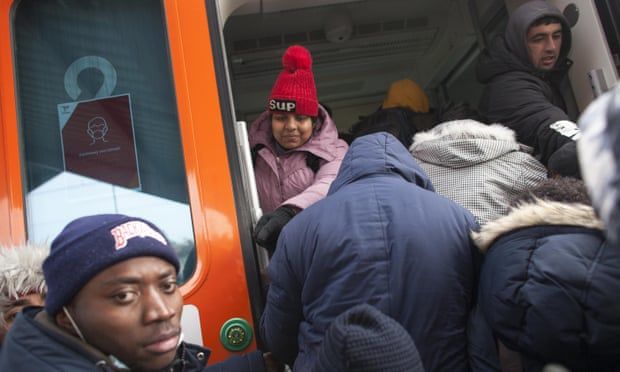 Refugees fleeing Ukraine arriving in Przemysl, Poland, at the beginning of the month.

Iyanuoluwa is among a large group identified by charities that appears to have been split up from other Ukrainians by authorities because they are black.

They include Kevin Kanjuru, from Kenya, who was studying computer science in Kyiv when Russia invaded and has family in Britain – an uncle in Northampton with UK citizenship who is also a local councillor.

They also include Nigerian Michael Uwandu who lived in Ukraine for 12 years but who was separated from his nine-year-old daughter and Ukrainian ex partner who fled before him and has lost contact with them.

The 37-year-old was granted Ukrainian citizenship in late February but had to leave before collecting his passport. Uwandu should be eligible for Gove’s scheme but the lack of proof of citizenship appears to have hampered his application and he has a sister, a British national, and cousin in the UK he is trying to join.

Others seemingly stranded include an Afghan refugee who had refugee status in Ukraine, but is not eligible for the sponsorship scheme – despite a UK national offering to sponsor her.

Clare Moseley, founder of the charity Care4Calais, said: “The UK schemes to help Ukrainian refugees come to Britain are heavily biased towards Ukrainian nationals. But they are not the only people whose homes and lives have been destroyed by the conflict.”

The government’s nationalities and borders bill, which is to return to the House of Commons in the coming weeks, intends to criminalise anyone arriving in the UK without permission, as all asylum seekers do.

The Department for Levelling Up, Housing and Communities rejected the claims as “utterly baseless.” A spokesperson said: “We are working as fast as possible to house refugees from across the world and are proud this country has provided homes for more than 4,000 Afghans evacuees in such a short space of time.

“The £10,500 provided to councils to support each [Ukranian] arrival is the same level of funding as under the Afghan Citizens Resettlement Scheme and we urge councils to join those who have pledged to support Afghan families, and those who can offer more housing places, to do so.”