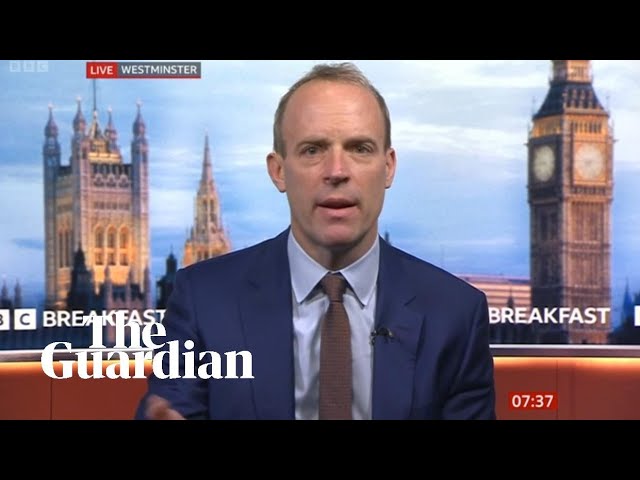 Justice secretary says he’s ‘making the point I’m right’ in exchange over whether he is in touch with ‘real world’
The deputy prime minister, Dominic Raab, asked a BBC presenter how much a litre of unleaded petrol costs in an awkward exchange on live television, adding: “I’m just checking how in touch you are.”

The testy discussion came after fuel prices climbed to record highs, with statistics from the data firm Experian Catalist showing that the average cost of a litre of petrol at UK forecourts on Wednesday was 168.2p. Diesel prices reached an average of 181.0p a litre on Wednesday, up from 180.9p a day earlier.

On Friday, BBC Breakfast’s Charlie Stayt asked the justice secretary how much a litre of diesel cost. Raab said he bought unleaded, and that the last time he visited a petrol station it was £1.65-£1.67 a litre.

However, Stayt said it had “gone up” recently, adding: “What’s happening in the real world is that people try and deal with things and those pump prices, as you pass them, they go up by the day.”

Raab then switched the question on to the journalist, asking Stayt: “Well you tell me, what’s a litre of unleaded today?” The BBC presenter said the highest price he had seen for diesel recently was £1.99 a litre at a service station on the M6.

Raab pressed Stayt again on the price of unleaded, saying: “I’m just checking how in touch you are, because last time I looked it was 165-167.” Stayt said that £1.68 was the latest price that he had seen for unleaded.

The deputy prime minister replied: “I’m just making the point that I’m actually right about the cost of a litre of unleaded.”

Stayt’s question falls in line with the “pint of milk” test, a strategy often used to show how much a politician is engaged with the realities of everyday life.

Journalists have repeatedly asked senior politicians and leaders if they know the price of everyday items, including milk, bread and fuel. People caught out by such questioning have included the former US president George HW Bush, the former UK prime minister David Cameron and the Australian prime minister Scott Morrison.
#Dominic Raab  #Raab
Add Comment