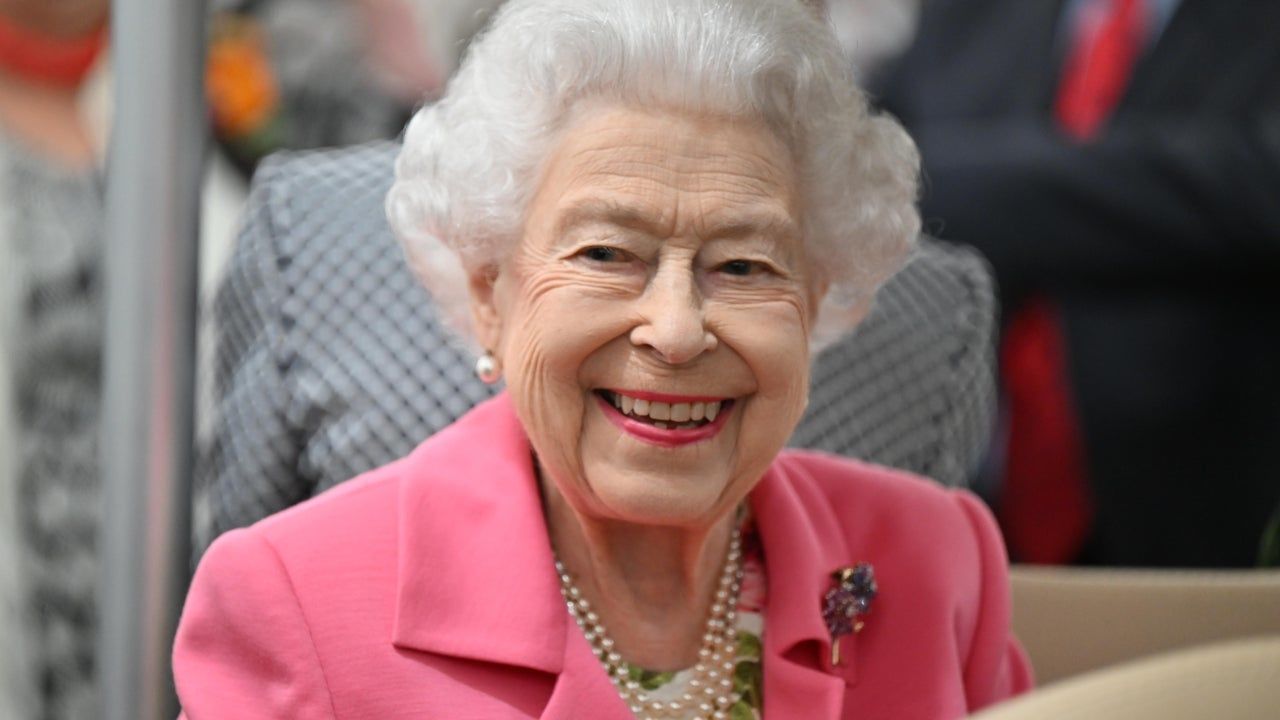 The Queen has visited the Chelsea Flower Show in London - using a buggy for the first time at the event, as she toured the gardens and exhibits.

The 96-year-old monarch, who has mobility problems, was driven around the annual flower show.

"Adjustments have been made for the Queen's comfort," said a Buckingham Palace spokeswoman.

After cancelling a series of events earlier this year, the Queen has been much more visible in recent weeks.

She attended the Royal Windsor Horse Show and made a surprise visit last week to officially open the Elizabeth Line. 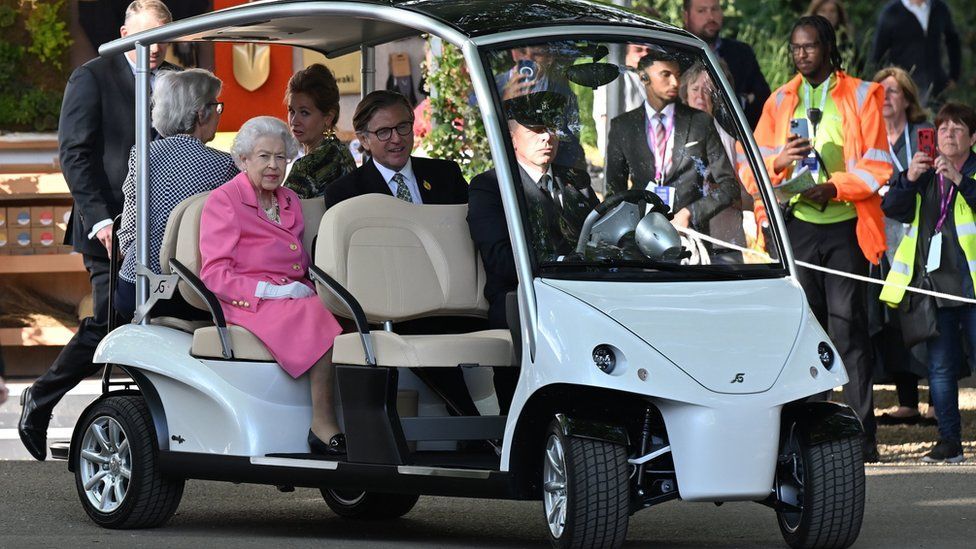 On Monday afternoon the Queen arrived at the Royal Horticultural Society's showcase, the day before it opens to an expected 140,000 public visitors.

The engagement was the first official outing for the Queen's buggy. It had a Garia logo, a Danish firm which makes luxury electric golf carts. 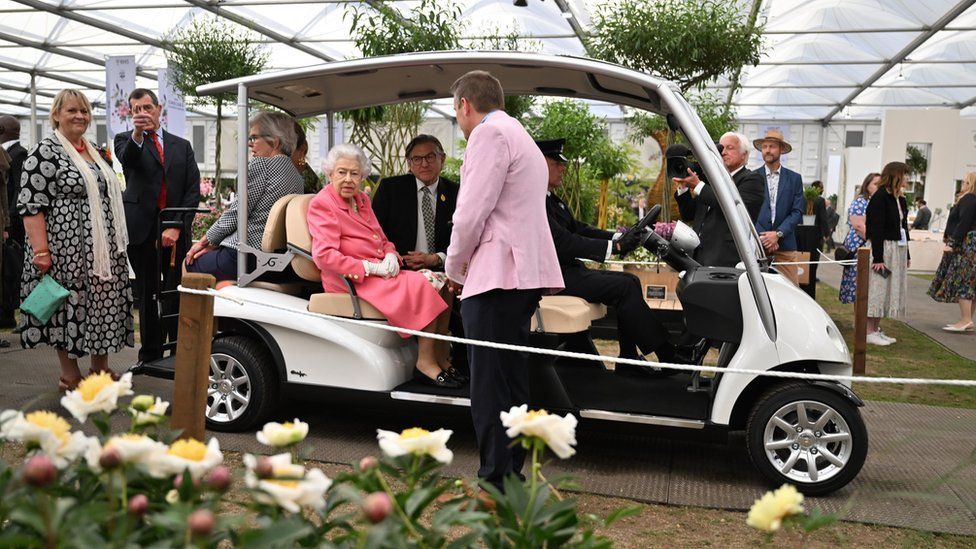 The monarch was last seen using a buggy to get around in 2013, at an event in the gardens of Buckingham Palace, and before that during a visit to Australia in 2011.

The Queen has attended the Chelsea Flower Show more than 50 times before, with 39 gardens and 80 exhibits on display this year.

This includes a Platinum Jubilee floral tribute to her 70-year reign.

Showing her around was Keith Weed, president of The Royal Horticultural Society.

The show was cancelled by the Covid pandemic in 2020 and rescheduled to September in 2021 - but is now back in its usual Spring season for the first time since 2019. 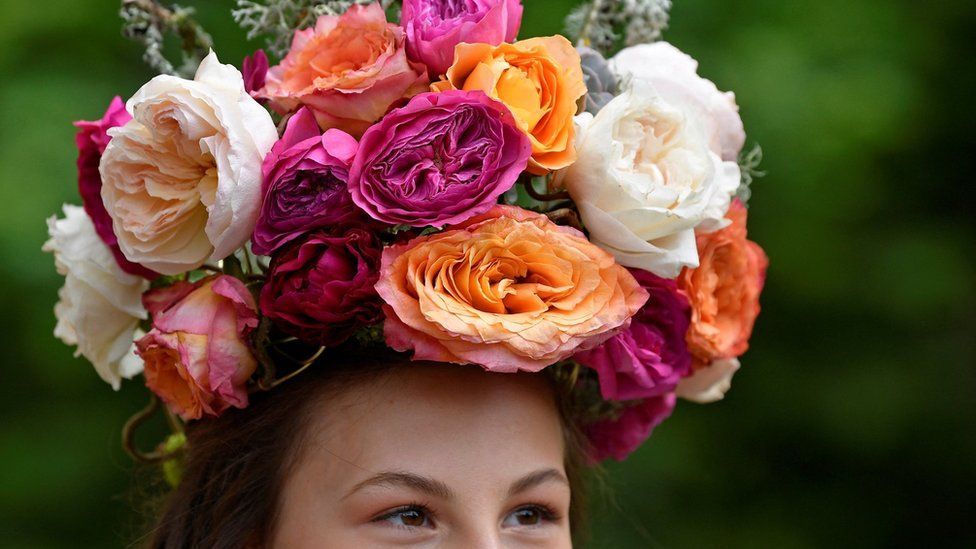 The flower show has returned to its traditional dates in May, after the disruption of Covid

Earlier on Monday a rose was planted in the garden of Buckingham Palace named after John Ystumllyn, believed to have been one of Britain's first black gardeners.

The rose, named after the 18th Century horticulturalist, is claimed to have been "the first in the country named after an individual from an ethnic minority background".

"The rose has been bred as a mark of friendship and community, and I hope guests and visitors to the garden will have the opportunity to reflect on what this rose represents for many years to come," said a message from the Queen.

Among the show gardens is a recreation of a beaver wetland, complete with a beaver lodge, dam, streams and natural wildflower planting.

And garden designer and TV presenter Joe Swift has returned to the show with a garden for the first time in 10 years, designing a bee friendly-focused exhibit called the BBC Studios Our Green Planet and RHS Bee Garden.

TV chef Ainsley Harriott was seen helping his sister after she fell into the water feature on the bee garden as they visited the Chelsea Flower Show.

He later tweeted his thanks to other people who helped her after her fall, and said: "She's doing fine and all is well."