Speaking to media after attending a service at the chapel at Royal Lodge Windsor, the Duke of York said: "I feel very sorry and supportive of my mother who is feeling it probably more than anybody else."

Philip, the lifelong companion of the Queen and the longest-serving consort in British history, died at the age of 99 on Friday. His body will lie at Windsor Castle until his funeral on Saturday.

"He was a remarkable man, I loved him as a father. He was so calm. If you had a problem he would think about it," Andrew said. "He was always someone you could go to." 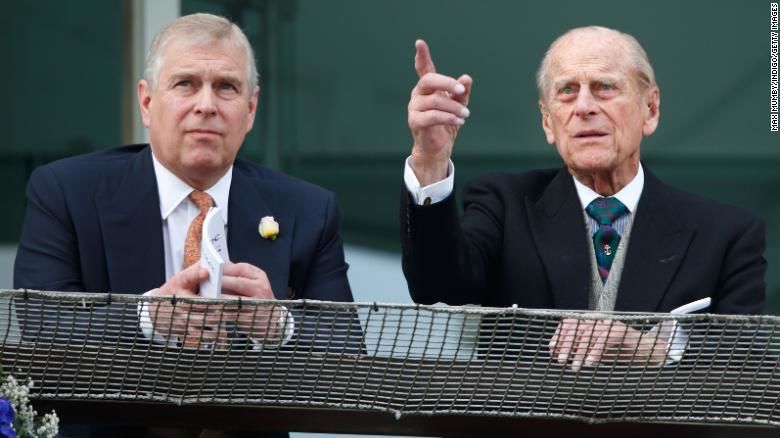 The news of Philip's death was met with an outpouring of tributes from around the world, including messages from every living US President and other world leaders.

The royal family themselves are "all feeling a great sense of loss," Andrew said. "We've lost almost the grandfather of the nation."

Asked how his mother is feeling, the duke replied: "The Queen as you would expect is an incredibly stoic person. And she described his passing as a miracle. And she's contemplating.

"She described it as having left a huge void in her life," he said, adding that the family is "rallying around to make sure that we're there to support her."

Andrew, often referred to as the Queen's favorite son, has stepped back from public duties after a disastrous 2019 interview with the BBC over his association with prominent sex offender and disgraced financier Jeffrey Epstein.

Prince Edward, the Queen and Prince Philip's youngest child, described the sense of shock over his father's death.

"However much one tries to prepare oneself for something like this, it's still a dreadful shock and we're still trying to come to terms with that and it's very, very sad," Edward, the Earl of Wessex, told the media after the same service.

He added that the royal family is appreciative of the "extraordinary tributes, and the memories that everybody has had."

Edward's wife Sophie, Countess of Wessex, noted how Philip "always exchanged words with everybody" in and around the royal estates. "They all meant a lot to him, and he always took a very personal interest in everything that they were doing. So they all have got stories to tell him. Most of them are quite funny as well," she added.

Princess Anne, the Queen and Philip's only daughter, said the duke was her "teacher," "supporter" and "critic."

"His ability to treat every person as an individual in their own right with their own skills comes through all the organisations with which he was involved," she said in a statement Sunday. "We will miss him but he leaves a legacy which can inspire us all."

"You know it's going to happen but you are never really ready," the princess added.