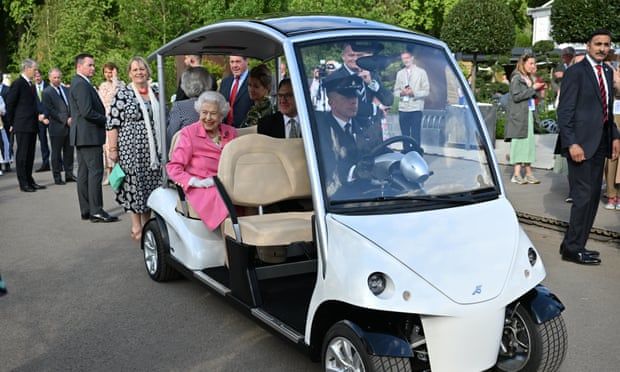 After two years of disruption the Chelsea flower show returned to its traditional May slot, with the Queen dropping in as guest of honour ahead of its opening to the public on Tuesday.

The 96-year-old monarch arrived in a buggy to tour the Royal Horticultural Society’s showpiece event.

Confirmation that the Queen, who has been experiencing mobility problems, would be attending came shortly before her arrival at the event at the Royal Hospital Chelsea in London. A Buckingham Palace spokesperson said: “Adjustments have been made for the Queen’s comfort.”

During the visit she was to be shown around 10 gardens using the vehicle. 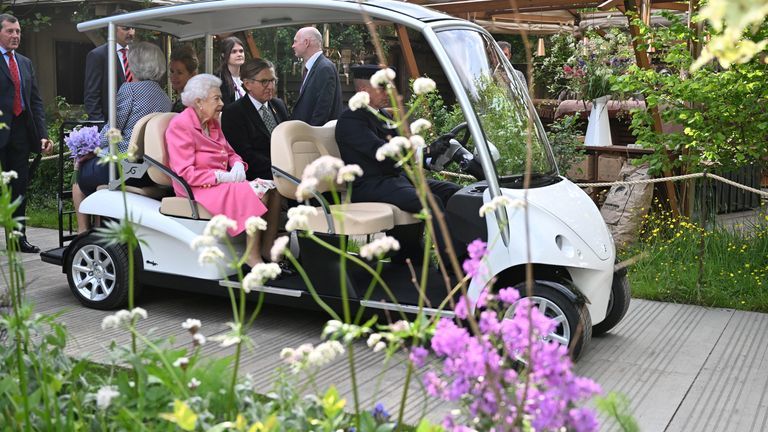 The Queen has visited the Chelsea flower show many times during her reign.

It is understood to be the first time in nearly a decade that the monarch has used a buggy at an official engagement.

The Queen’s transport at Chelsea, described as a royal household buggy, came complete with a chauffeur in a peaked cap. The Queen was accompanied by other members of the royal family, including the Earl and Countess of Wessex and Princess Beatrice.

Earlier this year, it was reported that the Queen had taken delivery of a £62,000, six-seater golf buggy. According to the Sun, it came with all-weather covers, a fridge and an infotainment screen.

The Chelsea flower show, which the Queen has attended on many occasions during her reign, this year features displays to celebrate her 70 years on the throne, including a floral sculptural portrait in the official platinum jubilee shade of purple.

Designed as a reconstruction of her postage stamp silhouette and covered on both sides with an assortment of native British-grown tree branches, it incorporates about 70 terracotta pots planted with lily of the valley, one of her favourite plants, which featured in her coronation bouquet.

Another installation is intended to transport visitors to one of the Queen’s favourite places, with a canopy of flowers including fresh delphiniums, emulating the colours and planting of the Scottish landscape near the royal family’s Balmoral residence in Aberdeenshire.

At the Great Pavilion, the monument will be surrounded by an exhibition of photographs of the Queen visiting the show throughout her reign.

The flower show’s other themes this year include wildlife and wellbeing.