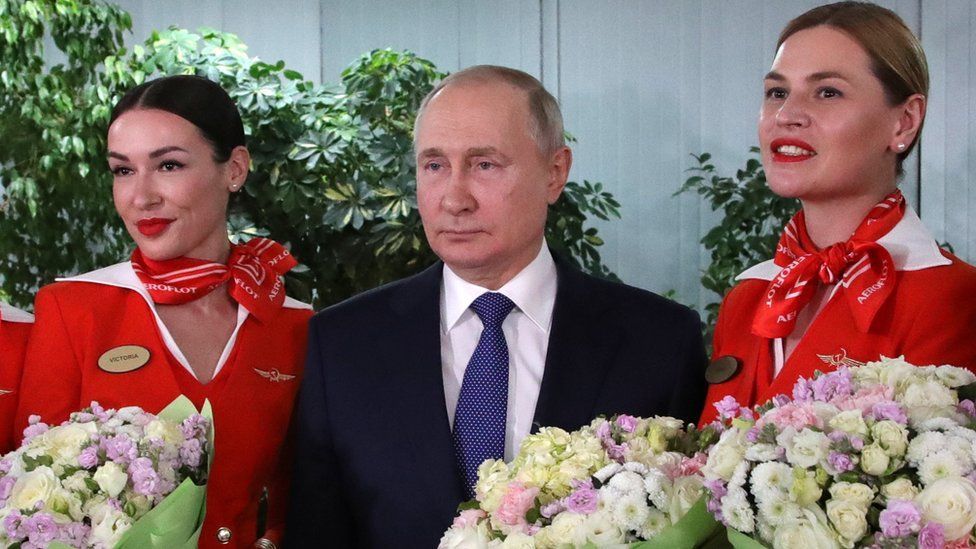 Putin says sanctions over Ukraine are like a declaration of war

Russian President Vladimir Putin has described sanctions imposed by Western nations over his invasion of Ukraine as "akin to a declaration of war".

"But thank God it has not come to that," he added.

Mr Putin also warned that any attempt to impose a no-fly zone over Ukraine would be seen as participation in the armed conflict.

And he rejected suggestions that he would introduce a state of emergency or martial law in Russia.

Mr Putin made the remarks while speaking to a group of women flight attendants at an Aeroflot training centre near Moscow.

Since the start of Russia's invasion 10 days ago, the West has imposed a raft of sanctions on Russia, including the freezing of Mr Putin's foreign assets and the exclusion of a number of Russian banks from the Swift international payments system.

In addition, many multinational firms have ceased operations in Russia, On Saturday, Zara, Paypal and Samsung became the latest global brands to suspend trading there.

The economic measures have already caused the rouble to plunge in value and forced the Russian central bank to double interest rates.

In his latest comments, Mr Putin sought to justify the war in Ukraine, repeating his assertion that he was seeking to defend Russian speaking communities there through the "demilitarisation and de-Nazification" of the country.

Responding to Western defence analysts' allegations that the Russian military campaign was going less well than expected, he said: "Our army will fulfil all the tasks. I don't doubt that at all. Everything is going to plan."

He added that only professional soldiers were taking part in the hostilities and there were no conscripts involved, despite reports to the contrary.

The Russian leader said efforts to impose a no-fly zone in Ukraine would be considered by Russia to be a step into the military conflict and those responsible would be treated as enemy combatants.

"The current leadership needs to understand that if they continue doing what they are doing, they risk the future of Ukrainian statehood," he added.

For his part, Ukrainian President Volodymyr Zelensky has condemned Nato for ruling out the no-fly zone. However, Western leaders say introducing the measure would be an escalation.

Mr Putin also said he had no plans to declare martial law in Russia. adding that such a step would only be taken in "instances of external aggression, in defined areas of military activity".

"But we don't have such a situation and I hope we won't have one," he said. 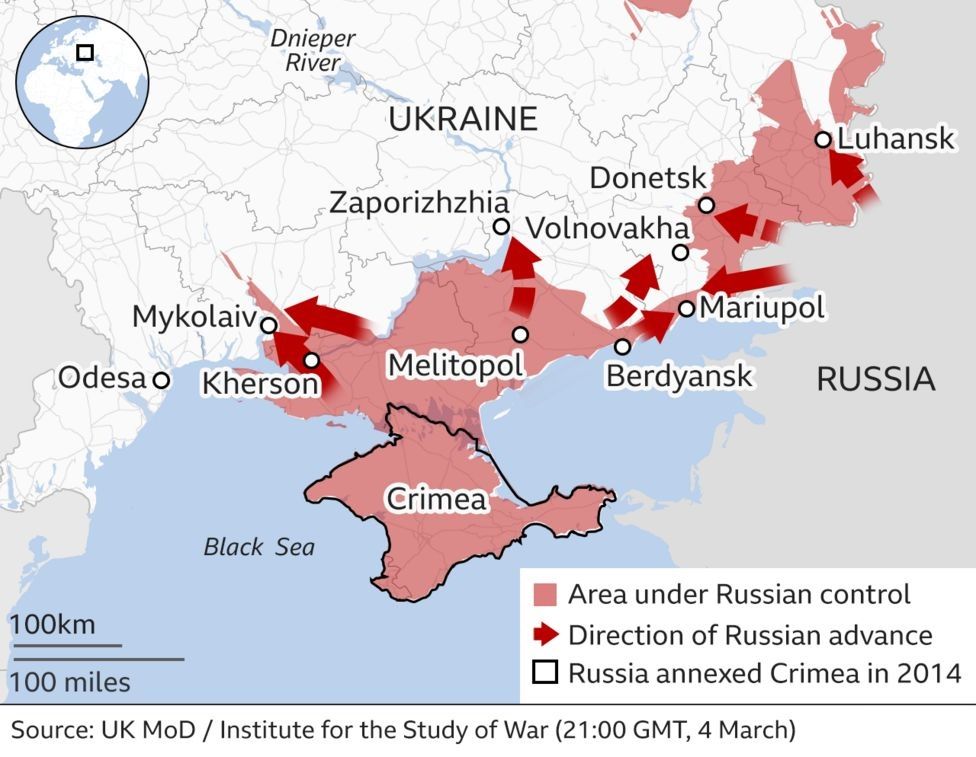 There had been rumours that Mr Putin was planning to declare martial law, which is when normal civil law is suspended or the military takes control of government functions.

He said there were other special emergency states which could be used in the case of a "large-scale external threat", but that he had no plans to introduce these either.

Meanwhile, diplomatic moves have continued on the sidelines of the conflict.

Israeli Prime Minister Naftali Bennett met Mr Putin in Moscow on Saturday and had a three-hour discussion on the war.

Mr Bennett then headed to Berlin to meet German Chancellor Olaf Scholz. As an Orthodox Jew, he broke Shabbat in order to travel, which is allowed under Jewish law if human life is at stake.

Although Israel is a key ally of the US, Mr Bennett has tried to preserve a good relationship with Russia. Ukraine's President Zelensky, who is Jewish, has called on Israel to mediate in the crisis.

And the US Secretary of State, Antony Blinken, has met Ukraine's Foreign Minister, Dmytro Kuleba, telling him he was in awe of his courage in standing up to Russia.

The two men met on the Polish-Ukraine border. Mr Kuleba reiterated his desire and optimism for more military backing from Nato, including a no-fly zone.

Watch: Locals clear out a shopping mall in Mariupol as the city remains under siege by Russian forces

MHogan 71 days ago
Stateofthenation website publushed a long article claiming we[the free world] are not fighting for Ukraine but rather for the New World Order [to be ushered in]. Put in that perspective (and a Politico Ukrainian literally spoke the purpose is for the New World Order). So … if we fight against Putin, are we, by extension, supporting the Great Reset/New World Order/Build Back Better agenda of the most evil who want to enslave us? IMO, this war is not “good versus evil” or “even evil versus evil” — the way I see it is “evil versus less evil” with the lesser one having to assume evil tactics in order to win. If you look at it on that basis, you have to pick a winner — the New World Order or Freedom. I suggest you research the background of Vlad (sure he was a KGB but there’s more to the man). For one, he is loyal to his country and loves Russia — can you say Biden loves his country (imo, no .. he loves money and power (especially money benefits to him and his Biden family) over love of Country or its citizens. There is much proof of this from his year in office and before. So … do your homework on Putin, why he really attacked Ukraine, his ethics and religious background and 100% dismiss the reports from mass media — they are filled with lies as are the words from Biden’s mouth. Between his WMD (war of mass distraction) and left-wing virtue signaling to support the “underdog” - time to free yourself from pre-conceived views and do your homework.
View all comments (1)Add comment