Public consent for test and trace in England at risk, says Jeremy Hunt

The government “risks losing social consent” for its test-and-trace programme if it does not immediately allow fully vaccinated people to avoid isolation, the former health secretary Jeremy Hunt has said. His comments came as it was revealed that a record 618,903 people in England and Wales were sent self-isolation alerts in the week to 15 July.

Conservative MPs were in open revolt on Thursday as reports and pictures emerged of empty supermarket shelves, blamed on the hundreds of thousands of people “pinged” or contacted by NHS test and trace and told to stay at home because of the rapidly rising number of Covid cases, which are at their highest level since January.

Businesses are to be told on Thursday whether their staff qualify for “critical worker” status, enabling them to leave self-isolation in England if they are fully vaccinated to avert major disruption to food supplies. Industries from petrol stations to the postal service have also reported being affected by absences.

Speaking in the Commons after a statement from the vaccines minister, Nadhim Zahawi, and amid reports of people deleting the NHS Covid app in droves to avoid being alerted, Hunt said: “Does he not think it’s time for the government to listen to public opinion and scrap the 10-day isolation requirement immediately for people who have been double jabbed in favour of having to isolate until they have done a negative PCR test? Otherwise we risk losing social consent for this very, very important weapon against the virus.”

Mark Harper, who chairs the Covid Recovery Group of Tory backbenchers, backed the plan to allow fully vaccinated people who are alerted to take a PCR test rather than self-isolate, to be moved forward from 16 August. “The danger is, large numbers of people will either delete or stop listening to the app, and then when we get to 16 August they won’t be getting the advice to get a PCR test, and we will actually have made ourselves less safe,” he said. 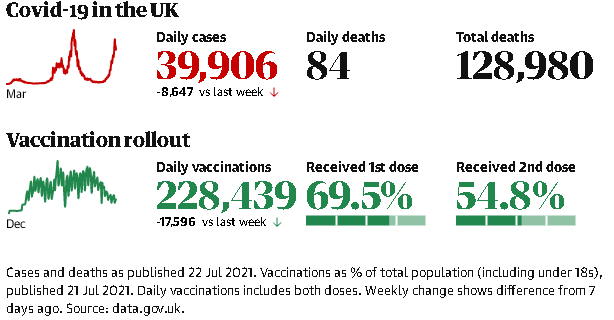 Kwasi Kwarteng, the business secretary, said he was “very concerned” by some of the scenes inside shops. He told BBC Radio 4’s Today programme: “It’s not a universal thing. I don’t want people to get the impression that every shelf in every supermarket is bare, that’s not the case. But we are certainly concerned about instances of shortages.”

The government has promised for days to publish further guidance about which firms can ask workers to leave isolation if they are fully inoculated to prevent chaos to councils and companies, given the rapidly dwindling workforce they are able to draw on.

The “narrow” list would be released on Thursday, Kwarteng said, suggesting it would not be a list of professions or companies eligible to apply to the government, but rather a breakdown of which sectors would be affected and which among them “might be exempt”.

He did not rule out workers in the food industry, including supermarkets, being eligible, urging people not to panic buy and saying: “I’m not panicking, I’m looking at the evidence.”

Current isolation rules for most the population were not scrapped on 19 July as some expected, meaning those who have had both Covid jabs must still quarantine if they are identified as a “close contact” of someone who has tested positive for the virus. This has recently included Boris Johnson and the chancellor, Rishi Sunak, after the double-vaccinated health secretary, Sajid Javid, tested positive for Covid.

Kwarteng said that when the rules changed on 16 August that would make an “enormous” difference, helping restore more of people’s freedoms and unlocking parts of the economy.

Downing Street said on Tuesday that companies would have to apply directly to the relevant Whitehall department that covers them for authorisation to bring staff back to work, but gave no indication of how long this process would take.

Make UK – the manufacturers’ association – said more than one in 10 businesses were saying some production had stopped. Almost a quarter of businesses reported up to 10% of staff were isolating, and almost one in 10 said it was up to 25%.

Stephen Phipson, Make UK’s chief executive, said: “The impact on manufacturing continues to rapidly increase and there remains an inconsistency of government policy that allows non-vaccinated people in nightclubs, while those who have had both jabs are asked to isolate. We would urge government to address this by bringing forward the planned August date in order to keep the economy open.”

The delay in giving businesses certainty about which workers will qualify for critical worker status has been criticised by industry leaders, including the managing director of the supermarket chain Iceland, Richard Walker. He said his company and others were seeing an “exponential” increase in workers taking time off since 19 July, telling the BBC: “We are taking matters into our own hands in terms of recruitment because we simply don’t have time to wait for the government to sort this out.”

Walker said that while there was not currently a crisis in supply and “dramatic pictures” in the media represented isolated incidents, a crisis could arise if ministers did not act fast.

“The people who should be panicking are the government, and the sooner they clear up this mess and get retail workers and HGV drivers on to the key worker list, the better,” he said.