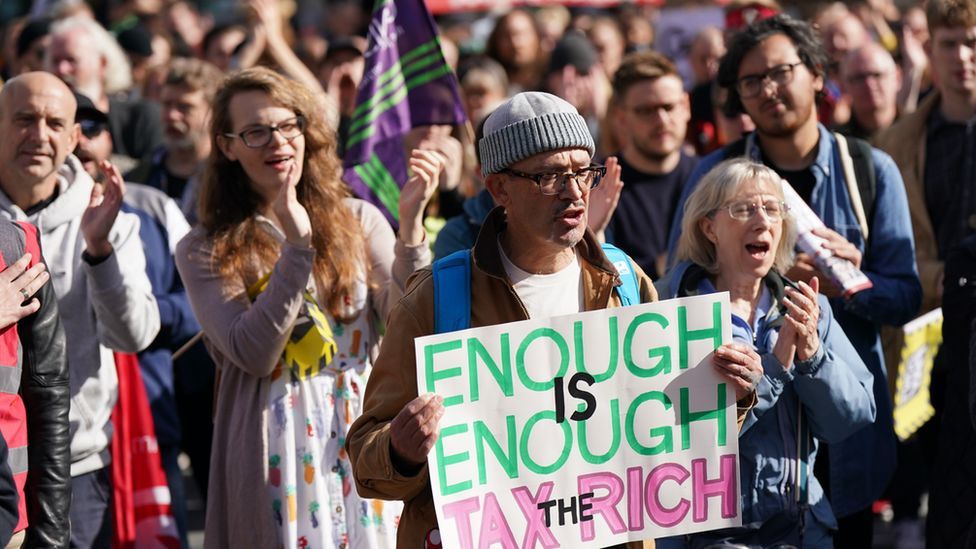 Enough is Enough, a campaign set up in response to the rising cost of living, held events in cities across the UK.

It comes on the day energy price rises came into effect for millions.

Members of Extinction Rebellion (XR), Just Stop Oil and the Revolutionary Communist Group (RCG) were also among those marching in London on Saturday.

Thousands attended the demonstrations, which also coincided with postal and rail strikes. People attended rallies in cities including Birmingham, Glasgow and Belfast.

Prices are twice as high as last winter, with an 80% increase in domestic gas and electricity bills - although this has been cushioned by a government cap on the cost per unit.

The government has said its energy guarantee would cost £60bn for the first six months, but industry analysts suggest the total bill could be between £130bn and £150bn.

As well as the huge rises in energy bills coming into effect, the rallies are also against the government's recent mini-budget, which included a £45bn package of tax cuts.

Those taking part include supporters of Don't Pay UK - a group encouraging householders to cancel their direct debits if the government does not offer further support to families.

One protester said: "The people want and desperately need change." 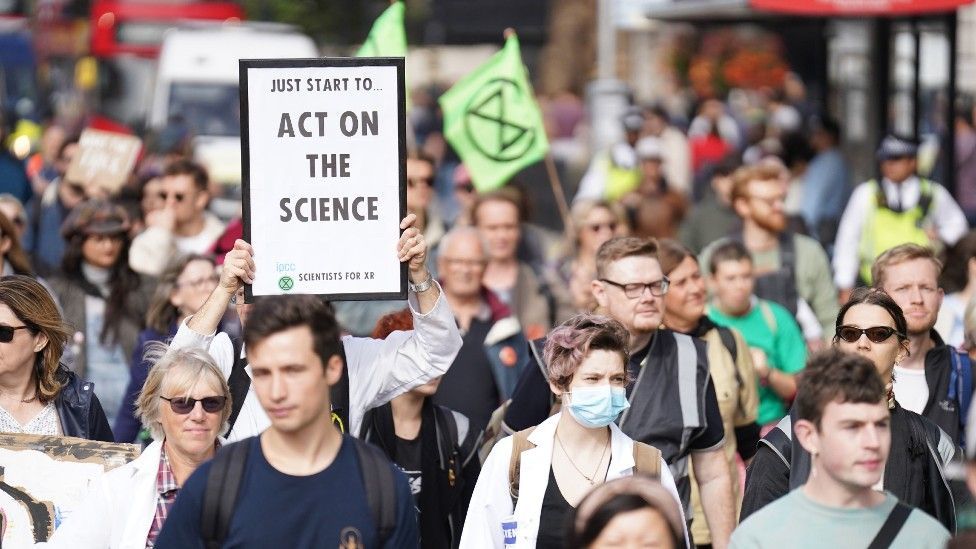 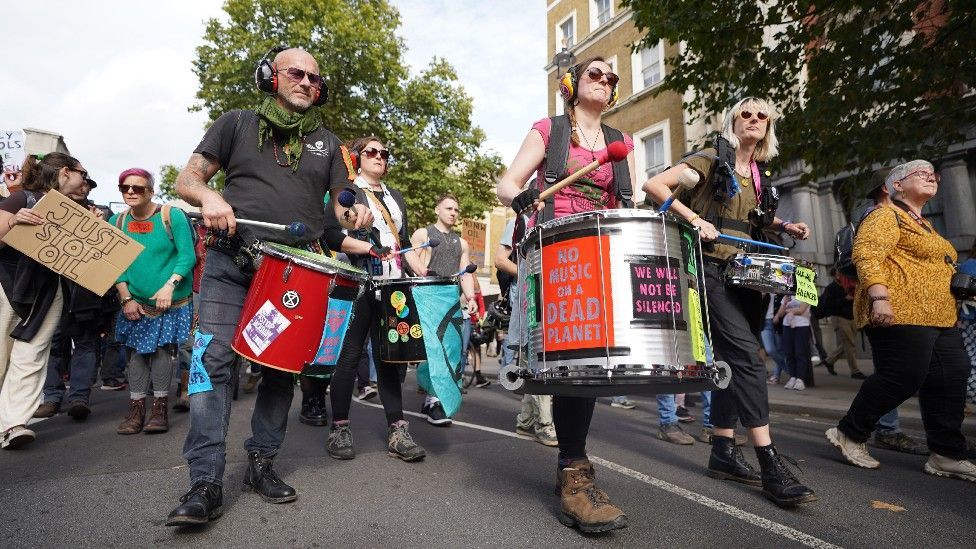 Musicians were among those taking part

The climate campaigners brought Westminster Bridge to a standstill as people sat in the road, chanting slogans about the environment and playing instruments.

A woman called Meg, a member of Doctors For Extinction Rebellion, who was taking part in the march said: "This is a climate emergency and people are already dying, more are going to die from the effects of climate change."

Some carried a banner saying capitalism was "the enemy of Mother Earth", others were protesting more specifically against the government.

A man, giving his name as George, criticised the Conservatives' record on fossil fuels and their financial record.

"No government can run if it's spending more, like vastly more, than it's bringing in," he said.

In Birmingham - where the Conservative party conference begins on Sunday - people burned mock energy bills in response to the rise in the cost of gas and electricity. 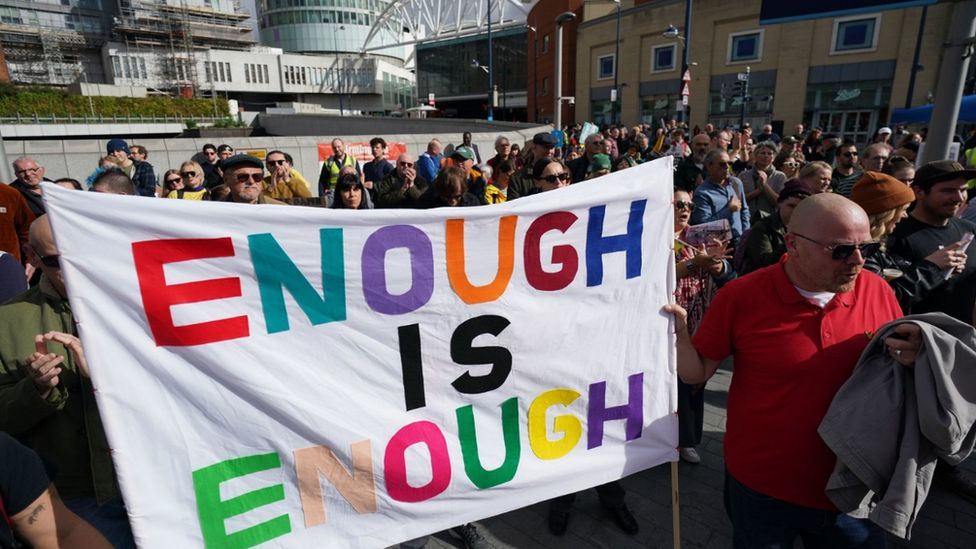 The campaign wants a real pay rise, cut to energy bills and a tax on the rich 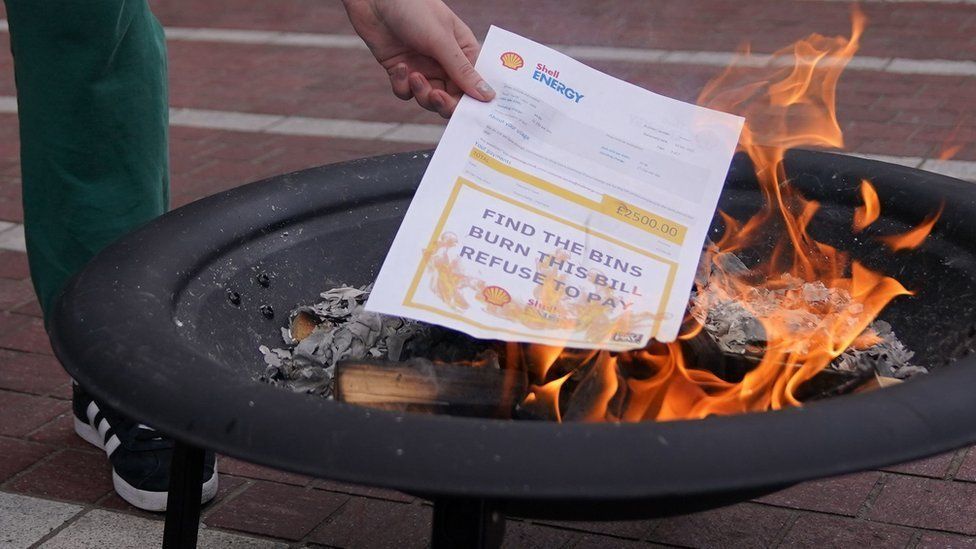 XR staged a protest in Edinburgh as people marched to the Scottish Parliament.

Retired Army officer Mike Grant, 62, said: "The climate crisis hit the UK with a vengeance this summer. The science has been clear for years but now we are seeing what that means in reality."

And architect Simon Clark, also 62, said: "The fossil fuel industry has openly enslaved our society, allowing it to create havoc in the environment whilst making record profits with complete impunity." 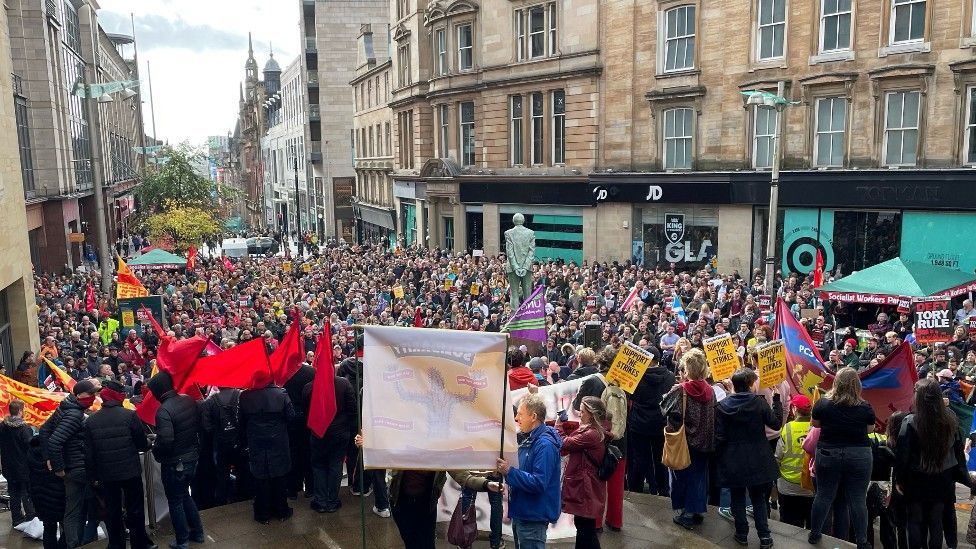 People gathered in Glasgow on Saturday

Protester Lily Holder, 29, who was on a London march organised by Enough is Enough said: "It's time to funnel our collective rage into something active and productive."

She was among a group supporting striking unions, like the Rail, Maritime and Transport Union (RMT), at King's Cross.

Some 50,000 workers from four unions are taking part in a strike on Saturday, resulting in the worst rail disruption of the year so far.

"This is an opportunity to express a shared sense of disillusionment in our Tory government," she said, adding: "The people want and desperately need change - and they need it soon. This winter is a frightening prospect and is going to show the true cruelty of our government."

She has resisted calls to reverse the tax cuts announced in Chancellor Kwasi Kwarteng's mini-budget or bring forward publication of the economic assessment of their plans. Mr Kwarteng says further economic plans being announced next month will include a "credible plan" to get finances back on track. 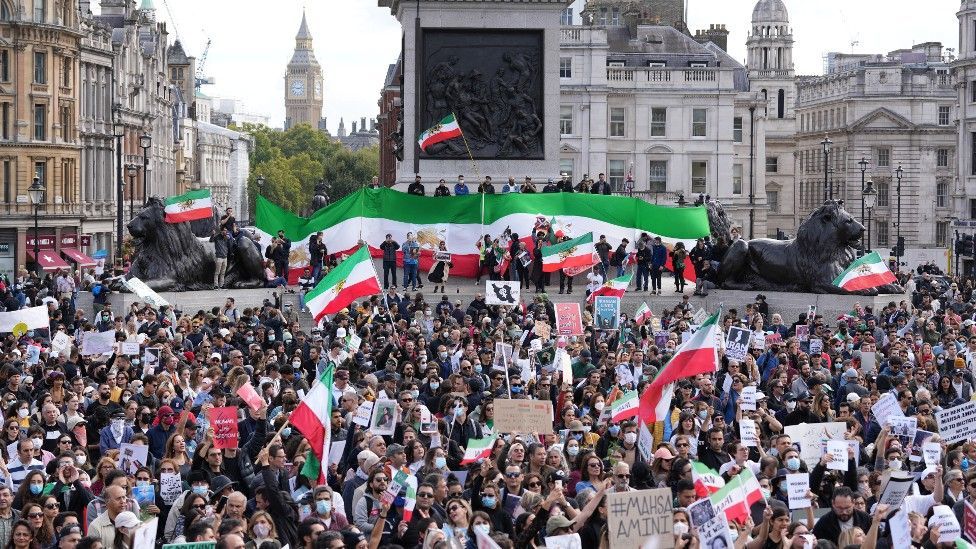 Protests have also been held in London following the death of Iranian woman Mahsa Amini. They included in Trafalgar Square, where people gathered to make their views heard. The 22-year-old woman died after she was detained by morality police.

Demonstrations have been taking place across the world, with those in Iran becoming increasingly violent and dozens of people being killed.