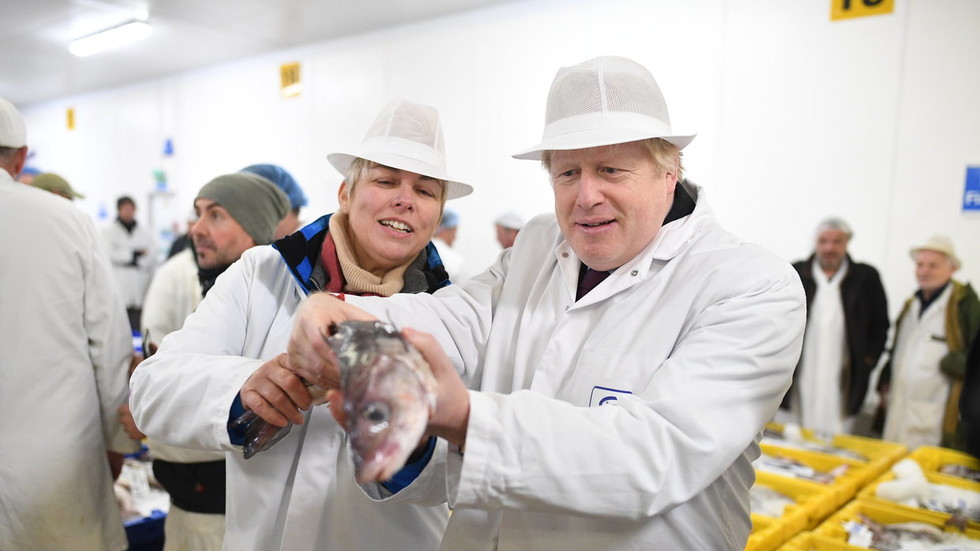 UK Prime Minister Boris Johnson has gone to great lengths to avoid an interview with Andrew Neil, but there was no avoiding a mob of angry protesters wearing masks of the veteran journalist’s face at a campaign stop on Monday.

Johnson was greeted by the booing demonstrators as he kicked off his final week on the campaign trail with a photo-op at a fish market in the port town of Grimsby.

Andrew Neil and some chickens waiting for Boris Johnson at Grimsby fish market this morning. pic.twitter.com/3AIRjjA3mO

The seat has been held by Labour for the last 74 years and it’s a key target for Johnson’s Conservative Party as it looks to secure a majority in the House of Commons.

“Boo Boris,” and “Nice to see you, Jeremy” rang out as the Neil mask-wearers welcomed the Tory leader to their town, The Mirror reports.

Some cheers were also to be heard as Johnson posed for selfies at the market. “He brings them out, eh? Phoney b**tard,” another man could be heard saying.

Labour councillor Gaynor Rogers tweeted a photo of the group sporting masks of the broadcaster’s face and holding pictures of chickens.

Johnson has received considerable criticism for dodging a sit-down interview with the notoriously tough interviewer, something the leaders of all other major parties submitted to. Neil issued a cutting ‘empty chair’ challenge to the prime minister as it became clear he wouldn’t be taking part.

The BBC was also blasted for airing interviews with the other leaders despite failing to secure Johnson’s agreement.

Johnson also didn’t attend a Channel 4 debate on the topic of the environment and climate change. In that instance his spot on the stage was taken by a melting ice sculpture.