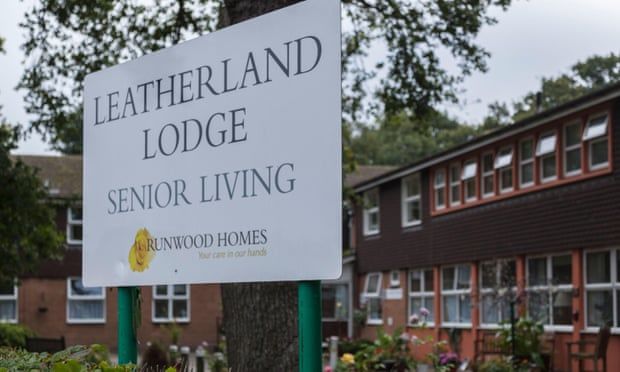 Amid staffing crisis and warnings that system is ‘deeply flawed’ companies caring for elderly and disabled enjoyed financial success
The UK’s biggest care home chains saw their profit margins jump by 18% on average during the pandemic, new research shows, while the highest paid director’s salary surged to £2.3m.

Amid a social care staffing crisis, and warnings from medical leaders that the system is “deeply flawed” and in need of urgent reform, analysis seen by the Observer lays bare the financial successes of major providers caring for elderly and disabled people.

The research – by the Centre for the Understanding of Sustainable Prosperity at Surrey University and Trinava Consulting with the trade union Unison – found that six of the 10 biggest adult social care providers for whom data was available saw their underlying profit margins widen between 2019 and 2020, the first year of the pandemic.

The biggest rise was at Runwood Homes, where the underlying profit margin widened by 37% in 2020, and which reported a profit before tax of £25.4m, up from £15m the year before, according to the research. A quarter of its homes are rated as requiring improvement by the Care Quality Commission.

The highest margin – 41.7% – was at Avery Healthcare, up from 39.8% in 2019 and 32.5% in 2015. The company, which runs 56 care homes in the UK, was recently acquired by the Reuben Brothers, named as Britain’s second richest family with an estimated fortune of £21.5bn, in the company’s first investment in the senior care sector. A press release in March said the deal – a joint venture with US real estate investment trust Welltower Inc – was expected to “generate significant future growth opportunities”.

The​ findings will fuel concerns about profiteering by private providers despite the pressures of Covid, and come amid reports of cost-cutting at some chains, and continued low pay for many staff.

Vivek Kotecha, public policy consultant and director of Trinava, which carried out the analysis, said: “During the pandemic there was a sense of national solidarity and sacrifice that was needed. I think people will be surprised to see that some companies actually appear to have done really well out of the pandemic.”

He added: “What it shows is that these businesses have high expectations for maintaining profitability, and workers and residents are feeling the brunt of this pressure.”

As well as widening profit margins, some providers also increased pay for their top executives during the pandemic, despite Covid pressures and the staffing crisis in social care, according to the research.

Runwood’s multimillionaire owner Gordon Sanders received an extra £2m in dividends in 2020, taking £3m that year compared with £1m in 2019. The company accepted £2m in taxpayer-funded furlough pay and Covid grants over the same period, according to Companies House records.

The findings come amid warnings that the social care sector is in crisis. The British Medical Association warned in June of a “ticking timebomb” and said years of chronic underfunding, severe staffing shortages and a growing elderly population meant that many in the future, particularly the most deprived, would not get the care they need. “This situation has been exacerbated by the pandemic, and government proposals to shape the future of social care have fallen significantly short of what is needed,” it said.

Last month, a report by Unison highlighted the growing role of private equity in the sector, finding that more than one in nine (12%) care beds in the UK were now in the hands of investment firms. It also revealed cost-cutting at several unnamed firms, including allegations of food and cleaning products being replaced with cheaper substitutes and residents’ meals being reduced from three to two a day.

Christina McAnea, the Unison general secretary, said: “The sector is on its knees, staff are leaving in their droves and those who rely on care are getting a raw deal. Yet many care home owners continue to see their financial fortunes soar amid this crisis. Root-and-branch reform is needed now with profiteering removed from social care.”

Barchester Healthcare said that it was investing in care homes and that staff received regular pay rises and loyalty bonuses. “In the six years from 2015 to 2020 inclusive, we invested a total of some £56m in capital expenditure on property and improvements of our services, to ensure that residents are living and staff are working in the best possible conditions,” it said. It added that the £2.3m figure given in company accounts for the highest paid director included a “non-recurring payment related to a long-term incentive plan”, and not just salary.
#Covid
Add Comment