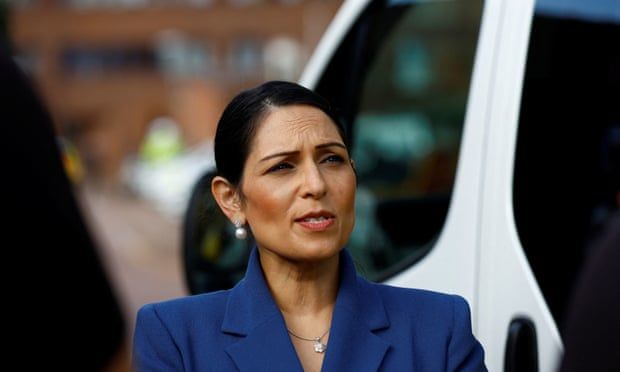 Sex abuse survivors, human slavery and torture victims are among at least 19 people who have been warned in recent days that they face being deported to Rwanda as the Home Office keeps faith with its “brutal” policy before a major legal challenge this week.

As signs mount that Priti Patel’s new plan for immigration is faltering, details have emerged of the next cohort of asylum seekers whom the home secretary wants to send on a deportation flight to Africa.

Information shared by charities indicates that six were trafficked or tortured, including one who was detained and beaten in a warehouse in the Libyan desert for eight weeks.

Not a single asylum seeker has been sent to Rwanda nearly five months after the Patel’s policy was announced. A judicial review of its lawfulness will be heard in the high court this week.

Another central element of the immigration plan – the setting up of new processing centres for asylum seekers – also appears to have stalled after the Ministry of Defence admitted to the Observer that, despite evaluating 100 different sites for the Home Office since January, it has yet to publicly identify a new one that might be used.

The only site named so far as “asylum accommodation” – in Linton-on-Ouse, Yorkshire – was abandoned after the Home Office failed to move any asylum seekers there and the MoD withdrew from the plan.

Meanwhile, attempts by Patel – who, reports suggest, may be axed as home secretary – to control the number of small boat crossings are also failing, with record numbers arriving. More than 25,000 have arrived so far this year. Another 3,733 people crossed the Channel during the week to 28 August – twice as many for all of 2019.

The Observer can reveal that the government is considering reintroducing its notorious refugee pushback policy for use against small boats crossing the Channel.

Five months ago, after the heavily criticised policy was officially withdrawn by ministers, documents released under freedom of information laws suggest the government is reconsidering the tactic that has been blamed for drownings in Greece.

Clare Moseley of the charity Care4Calais, one of the groups bringing this week’s legal action against the Rwanda plans, said: “The government’s brutal Rwanda policy targets people who have escaped from the worst horrors in this world. Given the more humane and effective options available, is this really what our country wants to do?”

Despite the legal challenge, the government plans to deport 19 people to Rwanda in the coming days. Details of 13 of these have been shared by Care4Calais after screening interviews of the asylum seekers: they include six who are married and two who have children.

Of those who shared details of torture in their preliminary questionnaire, one said they had been sexually abused in Iran and another that they had been “detained and threatened with execution if he didn’t comply with smugglers’ instructions” on the way to the UK.

A Sudanese person crossing Libya was detained for a month, “humiliated and made to work for no money”, said the charity. Of another, the charity said: “Smugglers were violent towards him throughout the journey in Turkey; [he was] kept for a week in a small room without food or water.”

Enver Solomon, chief executive of the Refugee Council, said the policy was having a profound deleterious impact on the mental health of asylum seekers.

“Every day, through our work, we are witnessing the impact the threat of removal to Rwanda is having, especially on people’s anxiety and mental health, with worrying reports of young people who have been self-harming,” said Solomon.

MoD documents dated 31 August 2022, released under freedom of information laws, reveal that pushbacks and the results of trials into the tactic could form part of “future policy regarding the live issues surrounding the passage of small boats across the Channel”.

However, the MoD is refusing to release its assessment of the trials that were conducted off the coast of Weymouth, in Dorset, during the summer of 2021, raising questions over the actual findings along with issues of transparency.

During a defence committee hearing in July, the armed forces minister James Heappey admitted that Patel and Boris Johnson were persuaded of the merits of the dangerous tactic by its use in Greece, where it has been linked to a number of deaths.

“The prime minister, the home secretary and advisers around government had seen the successful employment of pushback tactics elsewhere, principally in Greece,” said Heappey.

McCann added: “MSF teams working there [Greece] have seen and heard the terrible harm that ‘pushback’ tactics have caused, including injury, trauma and people being left adrift at sea.

“It is therefore deeply alarming that, while it claims to have dropped the policy, this government seems to be leaving the door open to revive it in future.”

Responding to queries before the judicial review into the Rwanda policy, Patel said: “We expected legal challenges to this innovative plan.

“Those behind these legal challenges have regrettably delayed the implementation of our partnership and have thus far only succeeded in giving succour to the people smuggling gangs over the summer, resulting in more people boarding flimsy craft and putting their lives at risk in the Channel.

“Rwanda remains a safe and secure country with a strong track record of supporting asylum seekers. The sooner we can deliver this new policy, the sooner we can break the business model of the evil people smugglers and prevent further loss of life in the Channel.”