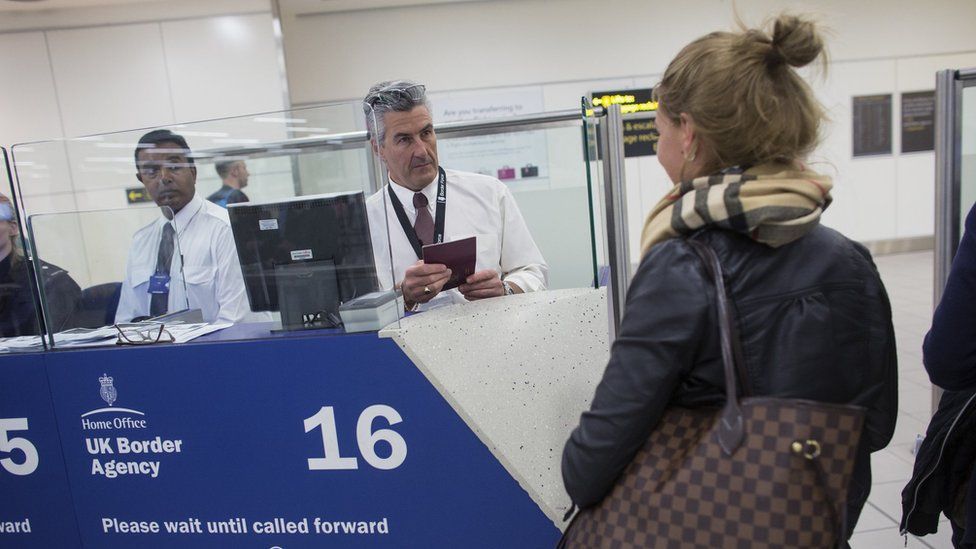 Priti Patel: 'Digital border' will allow us to measure arrivals

New US-style electronic border permits will give ministers a clearer idea of who is in the country, the home secretary has said.

Priti Patel said a planned Electronic Travel Authorisation (ETA) would allow officials to "count people in and count people out".

It will be required of all non-British or Irish citizens without a visa or immigration status who come to the UK.

But Labour warned of "serious questions" over delivering the system.

The government says the ETA scheme will be fully in place by the end of 2024, with up to 30 million applications expected to be processed each year.

In an online speech on Monday, Ms Patel said the electronic permits would create a "fully digital" and more secure UK border.

At the event hosted by the Bright Blue and British Future think-tanks, she said the ETA would deliver "greater accuracy" on arrival and exit numbers.

"We will have a far clearer picture of who is here, and whether they should be - and we will act when they are not," she added.

The new electronic permits, she added, would also "make it easier to identify potential new threats before they reach the border".

The Home Office says official migration figures - which are based on surveys conducted at airports and ports - have tended to underestimate the true figure.

Passengers required to get a permit under the new system would include those travelling to the UK for a short stay or transiting - changing planes - in the country.

People wishing to work in the UK or stay in the country for a long period of time - for example over six months - would need to obtain a visa, rather than an ETA.

The new scheme is modelled on the US Electronic System for Travel Authorization which has been in place since 2009. A similar system also exists in Canada.

The 27 European Union countries are planning to introduce their own version - European Travel Information and Authorisation System - next year.

In a policy paper published on Monday, the Home Office said it expects the process of processing ETA applications to be "largely automated," with "complex or adverse decisions" taken by officials.

The Home Office has not confirmed how much an ETA application will cost. The US scheme costs $14 (around £9), and the Canadian one $7 (around £4).

She said government plans unveiled in March would "reduce incentives for people to come here illegally - therefore removing the opportunity for criminal gangs to profit".

The proposals - which include deeming "inadmissible" asylum applications from people who arrive in the UK having gone through safe countries - have been condemned by refugee and rights groups.

Labour's shadow home secretary Nick Thomas-Symonds said: "The home secretary talks about a broken asylum system but it's the Conservatives who have been in power for 11 years and are responsible for that.

He added that the idea of e-borders "has been around for a number of years," whilst the loss of data from police databases in January meant there are "serious questions about the home secretary delivering this digital system."