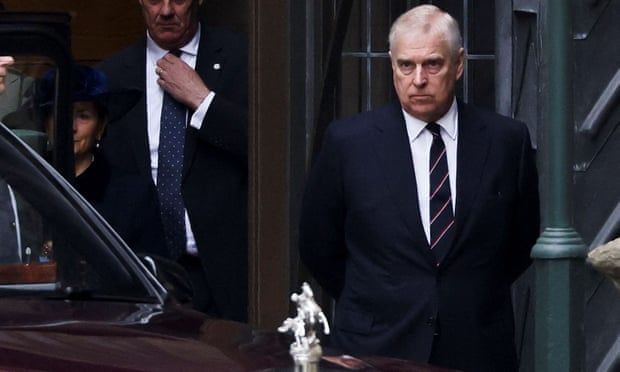 Report follows Turkish millionaire’s claim in high court that her financial adviser said cash was for help with passport application
One of the Duke of York’s senior aides told bankers that a now disputed cash payment to the prince was for his daughter Princess Beatrice’s wedding, it has been reported.

In 2019, Andrew received £750,000 from Nebahat Isbilen, a Turkish millionaire and wife of a former leading politician, who has claimed in the high court that she was told by her financial adviser Selman Turk to pay the sum to the prince in return for assistance with a passport application. It was later claimed in court documents that this was a false representation.

Isbilen is now suing Turk in the high court, alleging that he defrauded her.

Andrew offered no explanation on Friday as to why the money originally entered his bank account and why he paid it back in full after being approached by Isbilen’s lawyers 16 months after it was received.

The Daily Mail has obtained a transcript of a phone call on 14 November 2019 between Andrew’s former aide Amanda Thirsk and bankers acting for Isbilen.

In the call, the bankers queried the purpose of the £750,000 transfer from Isbilen’s account to the duke’s personal account at Coutts, and Thirsk, who was a senior member of the royal household at the time but no longer works there, said: “It’s a gift for the wedding, a wedding gift.”

Responding to the latest reports, a spokesperson for Andrew said they could not comment while legal proceedings were ongoing.

Isbilen had claimed that she had been told by Turk that the payment was for the prince’s assistance with a passport application, although it was later claimed this was a false representation.

An affidavit by Isbilen that has been seen by the Guardian states that she later saw an email from Turk to her bank claiming the transfer was a “wedding gift to Princess Beatrice owing to the close connection between our families”.

She adds: “This email is entirely false.”

Beatrice married Edoardo Mapelli Mozzi in a private ceremony in Windsor in July 2020.

Turk was the founder and chief executive of Heyman AI, a digital challenger bank which, nine days before the £750,000 payment was made, received an award in person from Andrew at a Pitch@Palace event – a Dragons’ Den-style project for entrepreneurs created by the prince.

On Friday it emerged that Beatrice’s mother and Andrew’s ex-wife, Sarah Ferguson, also received payments of at least £225,000 from Turk via Alphabet Capital, said to be in connection with payment she was owed for her work with a solar power company.

Ferguson’s spokesperson said: “The duchess was completely unaware of the allegations that have since emerged against Mr Turk. She is naturally concerned by what has been alleged against him.”

A spokesperson for Andrew said: “We are unable to comment on ongoing legal proceedings.”

The reports come after the prince settled a sexual assault case filed against him by Virginia Giuffre for an undisclosed sum, reported to be as much as £12m. The out-of-court settlement in the US civil case meant the prince made no admission of guilt over claims by Giuffre that he sexually assaulted her on three occasions when she was 17, allegations he has repeatedly denied.

On Tuesday, Andrew made his first public appearance since the settlement, alongside his mother, the Queen, at a memorial service for his father, Prince Philip.
Add Comment