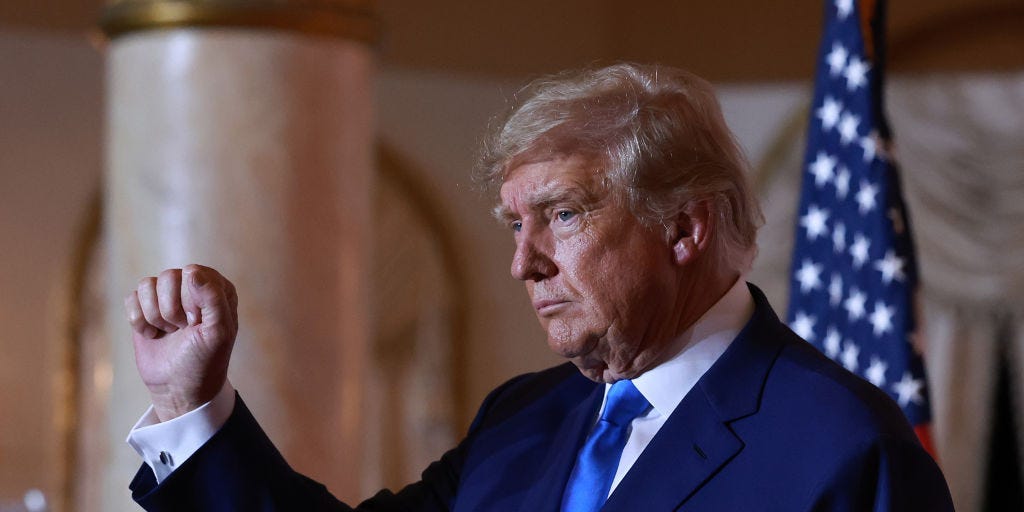 Trump's suspension could be lifted as soon as January, but Democratic lawmakers argue that he's still threatening public safety with misinformation.
Democratic lawmakers and left-leaning groups are pressuring Meta to keep Donald Trump off Facebook as the company weighs whether to reinstate his account as early as January.

They argue that the former president and current Republican presidential candidate shouldn't be allowed back on the platform because he continues to threaten public safety by spreading misinformation. Trump's Facebook and Instagram accounts were suspended after the January 6, 2021, insurrection when a pro-Trump mob stormed the US Capitol, hoping to overturn the 2020 election in his favor.

"On Facebook, he has a very large reach," said Kayla Gogarty, deputy research director of Media Matters for America. "Based on his current patterns, we're seeing him amplify extremism, problematic content that has been linked to real world violence."

Nearly half of Trump's posts and reposts on Truth Social in the week after the 2022 midterm elections pushed claims of election fraud and amplified QAnon accounts or content, according to December research from Media Matters. Another study by Accountable Tech found more than 350 of Trump's Truth Social posts would violate Facebook's safety guidelines.

"So if Meta allows him back on, it's essentially giving Trump a green light to push election misinformation again, dangerous rhetoric and extremism to millions of users who would not otherwise have access to it," Gogarty told Insider.

Trump was suspended from Facebook for two years after praising the Capitol rioters. He had posted a video telling the mob, "We love you, you're very special," and asking them to go home.

Facebook removed some of his statements, but his page still remains frozen on January 6, 2021, serving as a chilling reminder of the violence on that day that led to five deaths.

Posts that remain on the page show Trump exhorting his supporters to support law enforcement and be peaceful, but only after earlier posts in which he spread misinformation about voter fraud and accused his vice president, Mike Pence, of lacking courage for not taking action to overturn the election results.

Trump's spokespeople did not respond when asked whether he intends to return to Facebook if reinstated. Trump's Twitter suspension has lifted under its new owner Elon Musk, but Trump hasn't returned to the site. He has said prefers Truth Social.

Asked about Trump, a Meta spokesman pointed to a June 4, 2021, company statement, which said the company would consult with experts after the two-year suspension to assess whether the risk to public safety has receded.

"When the suspension is eventually lifted, there will be a strict set of rapidly escalating sanctions that will be triggered if Mr. Trump commits further violations in future, up to and including permanent removal of his pages and accounts," the company statement says.

However, Facebook fact checkers were reportedly told they could not verify the facts and claims in his posts if Trump were a presidential candidate, which he now is.

The studies by Media Matters for America and Accountability Tech coincided with their relaunch of a "Keep Trump Off Facebook" campaign, which included a six-figure digital and TV ad buy.

"His activity on Truth Social speaks to his potential activity if he's allowed back on some of these more mainstream platforms, like Facebook," Gogarty said.

"Trump has continued to post harmful election content on Truth Social that would likely violate Facebook's policies, and we have every reason to believe he would bring similar conspiratorial rhetoric back to Facebook, if given the chance," the letter said.
#Donald Trump  #Elon Musk  #Facebook
Add Comment