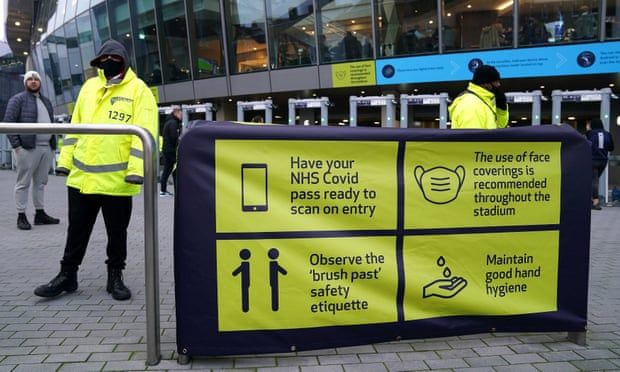 Proposals include unvaccinated players travelling separately to games, facing an additional check to get into stadiums and having meals away from vaccinated teammates. The moves are designed to guard against more fixtures being cancelled as the clubs decided to press on with the season.

A complication for the league is that under government guidelines unvaccinated players must isolate for 10 days if deemed a close contact of anyone who has tested positive, even if they produce negative results. This increases the likelihood of postponements by reducing the pool of players available to a club.

The plans discussed by the Premier League’s clubs remain under consideration but it is expected that some form of differentiation for unvaccinated players will come into effect. The league has said it will publish updates on its vaccination figures each month from the end of January.

The 90 positive cases dwarf the previous high of 42 recorded a week earlier. Ten Premier League matches were cancelled because of Covid during the seven days in question, across which 12,345 tests were administered. There were 41 positives from Friday to Sunday alone. Players and club staff do daily lateral flow and twice-weekly PCR tests.

The top-flight clubs decided to press on with the season after talking through three options with regard to the calendar: to carry on playing; to defer one fixture per club from the three rounds scheduled to be played from 26 December to 3 January; and to stop playing entirely while the outbreak gripped.

A handful of clubs favoured option two, with one of them understood to be Liverpool, who took their lead from Klopp. He feels that it is irresponsible to make the players play twice from Boxing Day to 28 December when squads are stretched because of Covid issues. Liverpool have four players in isolation because of positive tests.

The vast majority of clubs, mindful – principally – of the potential for a horrendous fixture pile-up that could derail the season, indicated a readiness to play on. It was also acknowledged that it would be problematic to fairly postpone specific fixtures or rounds with some, plainly, easier for certain clubs than others.

No clubs wanted to pause the season and Brentford and Chelsea, who have publicly raised concerns in recent days, were among those who voted to continue. “It is the league’s collective intention to continue the current fixture schedule where safely possible,” the Premier League said.

In an attempt to reduce or eliminate the number of last-minute postponements, clubs have been asked to update the league every day on the availability of their players. Aston Villa v Burnley on Saturday was the latest match called off about two hours before kick-off. It is understood the league is paying for more PCR labs to help speed up daily testing.

The EFL has said it will press on with its league and Carabao Cup fixtures. The Football Association has scrapped replays in the third and fourth rounds of this season’s FA Cup to try to help ease potential congestion, with extra time and penalties used if necessary.
#COVID-19  #Covid
Add Comment