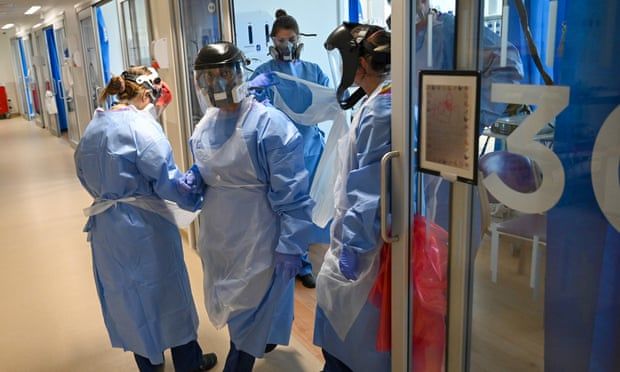 Exclusive: Lib Dems accuse government of ‘extreme negligence on an industrial scale’ over waste of 5bn items
Almost 5bn items of personal protective equipment worth £2.7bn will be wasted as they are no longer needed or cannot safeguard NHS staff, ministers have revealed.

The huge sum of money involved has prompted the Liberal Democrats to accuse the government of “extreme negligence on an industrial scale” in its use of public funds during the pandemic.

The revelation came in a written parliamentary answer by the health minister Edward Argar.

He was responding to a question tabled by Wendy Chamberlain, the Liberal Democrats’ chief whip and MP for North East Fife, about how much of the PPE that had been procured had then not been used.

Argar said the government’s PPE programme had ordered more than 36.4bn items since the pandemic struck in March 2020. “Of this, approximately 3.4bn units are currently identified as potential excess stock. The estimated price for those items is £2.2bn,” he said. The minister did not explain why so much PPE had ended up as “potential excess stock”, or define precisely what that meant.

He also said that 6.96bn items of the 36.4bn ordered so far “are not currently provided to frontline services”. That could be because it was new stock that had not yet been through quality assurance checks or not deployed because “a different product is preferred”.

Chamberlain said the disclosures showed that “the government is burning a hole in the pocket of the taxpayer through its wastage of personal protective equipment”.

She added: “The government has misspent billions of pounds of public money on vital PPE for frontline staff that is either inadequate or will never be used. This is carelessness of the highest magnitude.”

The waste of £2.7bn was yet another of the government’s “string of damning failures” over PPE, she said.

“Awarding contracts to chums unlawfully, frontline workers wearing bin bags and dodgy masks, and billions wasted – this is merely the latest sorry chapter in this Conservative government’s inglorious record of procuring and supplying PPE to health and care workers who have worked so hard, with a dangerous virus circulating in hospitals and care homes, to give people care over the last two years.”

The British Medical Association expressed disquiet at the wasted PPE.

“Hearing that stocks of much-needed PPE were potentially left unissued, and that inadequate PPE was ordered, are just more failings in a catalogue of poor management which has resulted in wastage of significant amounts of public funds,” said Dr Vishal Sharma, the chair of the consultants committee at the doctors’ union.

Dr Jenny Vaughan, the chair of the Doctors’ Association UK, a grassroots network of NHS medics, said: “The distinction between making sure there is enough protection and keeping stock levels so high [that] much will go to waste seems to have been well and truly lost, along with taxpayers’ money wasted.

“We recognise the need to make sure staff continue to be protected but every pound squandered is a pound that cannot be spent elsewhere in the NHS, where every pound counts. The government needs to be completely open about how this is happening, and where the money went.”

The revelations raise serious questions about the government’s probity and candour over PPE, she said.

A Department of Health and Social Care spokesperson said: “We have been working tirelessly to deliver PPE to protect our health and social care staff on the frontline, with over 17.5bn PPE items delivered so far.

“Where we have surplus stock of PPE, we have a range of measures we can take, including sales, donations, reuse and recycling or recovering costs from the supplier. In addition, we are working on plans to extend shelf life where appropriate.”
Add Comment