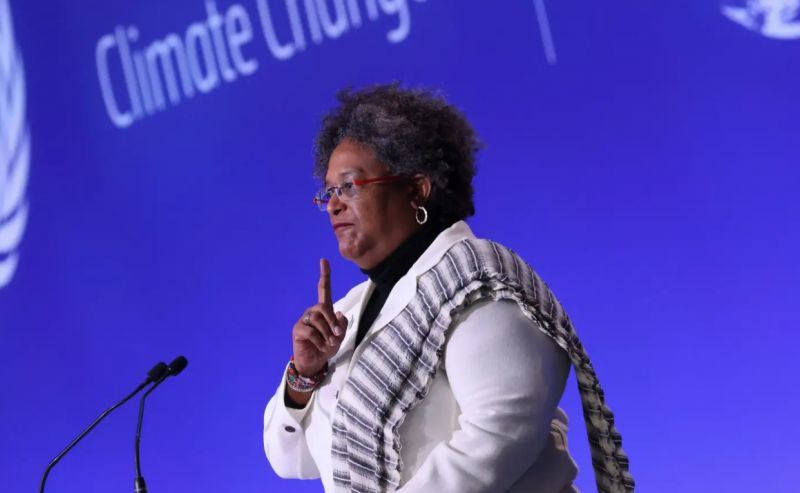 Powerful speech Barbados PM was a breakout moment at COP26

A 2-degree Celsius rise in global temperature would be a "death sentence" for island and coastal communities, Prime Minister of Barbados Mia Mottley said in a powerful speech at the COP26 climate summit on Monday.
"We do not want that dreaded death sentence, and we have come here today to say, 'Try harder,' " she said.

Mottley said failure to provide enough funding to small island nations on the frontlines of climate change is "measured in lives and livelihoods."

"This is immoral, and it is unjust," she added.

Mottley urged her fellow world leaders to use the COP26 summit in Scotland to address pressing issues causing people anxiety, like the climate crisis or COVID-19 vaccine distribution.

"Are we so blinded and hardened that we can no longer appreciate the cries of humanity?" she said, calling on world leaders to avoid failing the people who elected them to office.

She said if world leaders had spent more money to finance a transition to more sustainable energy usage, food consumption, and transportation, the global temperature crisis would be less pressing.

"If our existence is to mean anything, then we must act in the interest of all of our people who are dependent on us," Mottley said.

"And if we don't, we will allow the path of greed and selfishness to sow the seeds of our common destruction," she added.

Nations agreed on two major agreements to stop deforestation and reduce methane emissions by 2030 at the climate summit.

Leaders from over 100 countries — including the US — signed the deforestation pledge.

And the White House on Tuesday said more than 90 governments will join the US in the methane emissions reduction pledge.
#COVID-19  #vaccine  #Covid
Add Comment