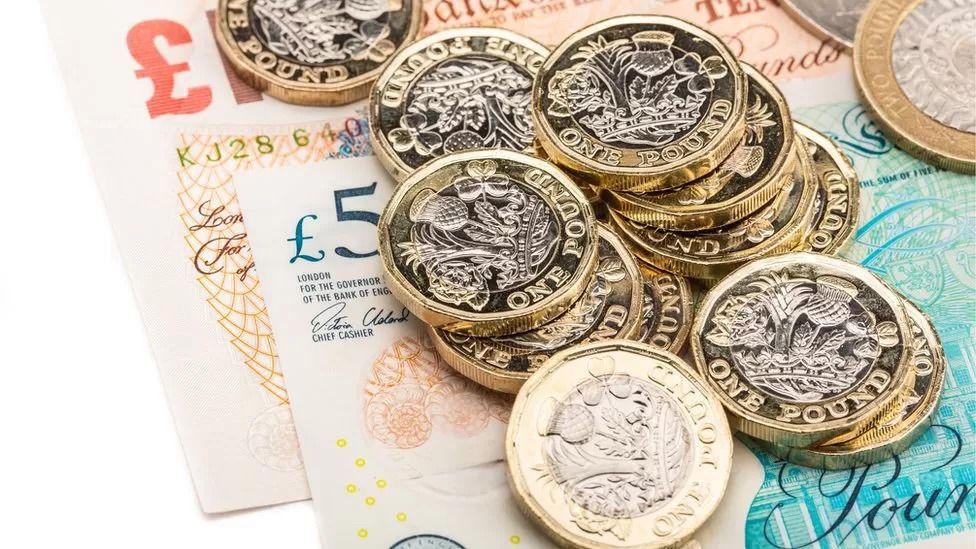 The pound rose against the dollar and government borrowing costs dipped as the markets reacted to Prime Minister Liz Truss's resignation.

Sterling hit $1.13 as the Ms Truss made her announcement and rose higher in the afternoon before falling back to $1.12.

One analyst said investors were "relieved" by the news, despite a lot of uncertainty remaining.

Business groups said the new prime minister would have to act quickly to restore confidence.

A fall in the value of the pound increases the price of goods and services imported in to the UK from overseas - because when the pound is weak against the dollar or euro, for example, it costs more for companies in the UK to buy things such as food, raw materials or parts from abroad.

A weaker pound can push rising costs higher as well if companies choose to pass on higher prices to customers. For people planning a trip overseas, changes in the pound affect how far money can go abroad.

While the pound plunged to a record low against the dollar last month, government borrowing costs rose sharply in the aftermath of the government promising huge tax cuts in its mini-budget without saying how it would pay for them.

But these costs fell back after the Bank of England stepped in with an emergency support programme, and after Jeremy Hunt reversed nearly all the mini-budget measures when he became chancellor.

Mr Hunt is due to announce plans for spending and tax on 31 October in his economic plan, which the Treasury confirmed was set to go ahead, although there are reports it could be delayed due to the Conservative leadership contest.

"Although the resignation of Liz Truss as prime minister leaves the UK without a leader when it faces huge economic, fiscal and financial market challenges, the markets appear to be relieved," said Paul Dales, chief UK economist at Capital Economics.

"But more needs to be done and the new prime minister and their chancellor have a big task to navigate the economy through the cost of living crisis, cost of borrowing crisis and the cost of credibility crisis."

Simon French, chief economist at Panmure Gordon, said the market reaction had been "fairly muted", with investors waiting for the "detail of what comes next". 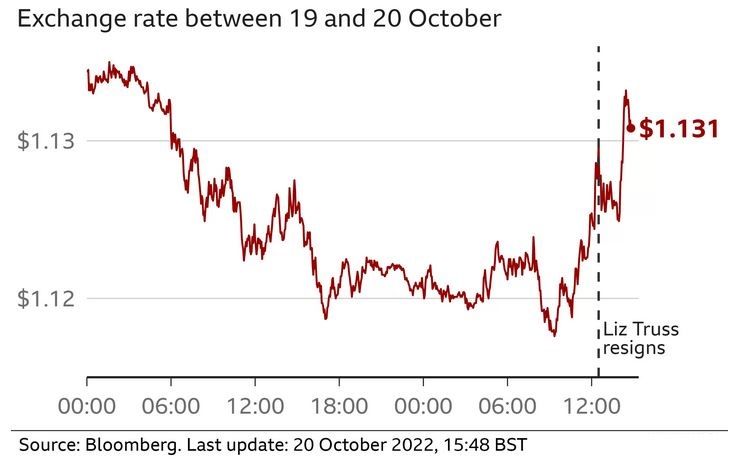 Ms Truss said her successor would be elected in a Tory leadership contest, to be completed in the next week. Her resignation came after a key minister quit and Tory MPs rebelled in a chaotic parliamentary vote on Wednesday.

Mr French said the markets could rally "more aggressively" if a clear favourite emerged for PM. "The sooner you get there the more likely the person who has won will have the support to do the difficult stuff."

The head of the CBI business lobby group, Tony Danker, said: "The politics of recent weeks have undermined the confidence of people, businesses, markets and global investors in Britain.

"[The next prime minister] will need to deliver a credible fiscal plan for the medium term as soon as possible, and a plan for the long-term growth of our economy."

The interest rate - or yield - on UK government bonds for borrowing over a 10-year period climbed above 4% at one point on Thursday morning, but then fell back steadily as speculation grew about the possible departure of Ms Truss.

Typically, the government agrees to repay the investor on a certain date in the future when a bond "matures". In the meantime, it pays interest on the loan.

However, the mini-budget hit confidence in bonds, and it led to investors demanding a much higher rate of interest in return for investing in them. Some bonds halved in value.

Following the PM's statement, the yield edged higher again to about 3.8%, but still remained below the level seen at the start of the day.

Ahead of Liz Truss's resignation, Bill Blain of Shard Capital had told the BBC that the markets had been "watching in a kind of stunned, open-mouthed horror" at political events.

"The problem we've got is that the last couple of weeks has really destroyed the image of political competency and that's one of the key elements to make any economy work," he said.