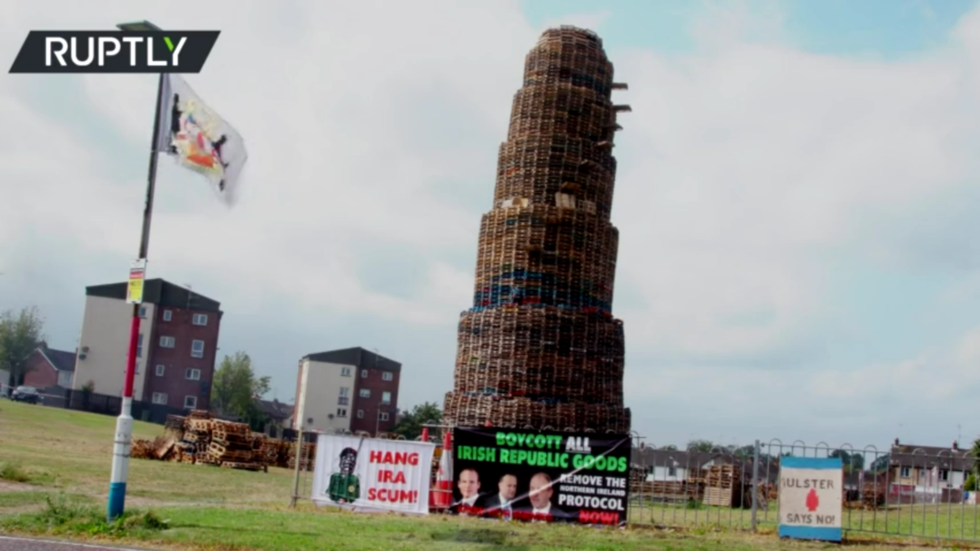 A towering structure made of wooden pallets has been set ablaze in the Northern Irish town of Portadown to mark the Eleventh Night, with a political agenda igniting this year’s Protestant celebrations amid post-Brexit tensions.

Bonfires are traditionally built in Northern Ireland every July, as part of events commemorating the victory of Protestant King William of Orange over Catholic King James II in the late 17th century. Dozens are built across the country, but this year some particularly big ones have sprung up carrying a political message.

The massive bonfire built by Portadown loyalist residents was adorned with an Irish flag and political banners, including one reading ‘Boycott All Irish Republic Goods. Remove the Northern Ireland Protocol’. Defiance has increased amid post-Brexit tensions, in particular regarding the aforementioned agreement with the EU.

Residents with torches gathered by the Portadown fire, and the structure was then burning, while firefighters were extinguishing the flames, as seen in the footage by RT’s video agency, Ruptly.

Building bonfires on the Eleventh Night is “part of the culture and history,” a local standing by the huge structure made of pallets told Ruptly.

However, efforts to turn the tradition into a protest have been condemned by some local politicians, who said the move was “disgraceful.”

Officials have warned that huge bonfires might endanger other community members. Locals also expressed their concerns on social media, apparently worried by the structure that was not protected by any barriers and was built in a residential area.

Local loyalists say their bonfire is a message of opposition to the withdrawal trade agreement, which allows Northern Ireland to stay in the EU single market, as they believe it threatens their land’s status in the UK. “It was specified that it [Brexit referendum] was a UK-wide vote … We were told it is all in, or all out … The European Union talk wholeheartedly about democracy. But our democracy has been failed, because the EU won’t let us leave the European Union as a full United Kingdom,” the local said.