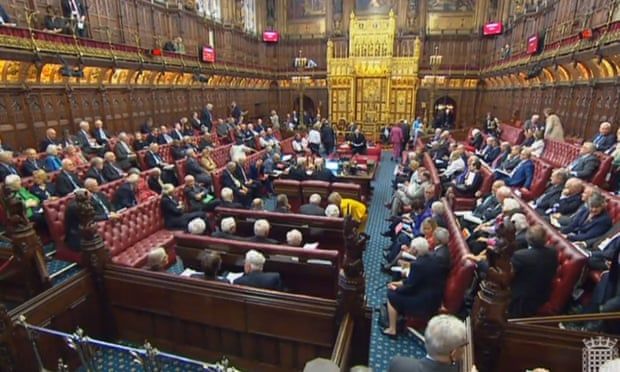 Exclusive: House of Lords ‘bursting at seams’ and reform is needed, say campaigners

Campaigners have called for an end to “unchecked political patronage” as polling found most people oppose plans for Boris Johnson to appoint new peers in the final weeks of his premiership.

Alarm was raised by the Electoral Reform Society over a proposal drawn up by CT Group – a political lobbying firm run by the Conservative adviser Lynton Crosby – for the prime minister to appoint up to 50 new Conservative lawmakers to ram contentious legislation through parliament.

The leaked document sparked condemnation from Gordon Brown, and led to accusations the Lords was already “bursting at the seams”, meaning more “meaningful checks and balances” on appointments were needed.

Polling from Opinium found 54% of people are against Johnson drawing up a “resignation honours” list that could ennoble key allies who stuck by him during the dying days of his administration and urged him to fight on. Just 13% backed the move, while 34% expressed no view.

Among voters who backed the Conservatives in 2019, 41% were against the plan while 21% were in favour. There were 2,000 adults surveyed at the end of July and their responses were weighted to be nationally representative.

Darren Hughes, chief executive of the Electoral Reform Society, told the Guardian that most people were against “prime ministers stuffing the Lords with friends and donors as they head for the exit door”.

He said: “Each new peer created gets a lifelong right to sit in parliament, which means potentially decades of influence over our laws as well as expense to the public. How they are chosen matters.

“At over 800 members the Lords is already bursting at the seams, and with more peerages planned it is clear we cannot simply rely on the restraint of individual prime ministers to slim down our bloated second chamber.

“This is why we need to urgently reform the system so there are meaningful checks and balances governing who is appointed to the Lords.

“Ultimately, it shouldn’t be at the whim of the prime minister to decide who makes and scrutinises our laws. It’s time to end this system of unchecked political patronage and ensure all our lawmakers are elected by the people they serve.”

While previous prime ministers have appointed peers at the end of their administration, Johnson was accused by the former Lord Speaker Helene Hayman of attempting to “trash constitutional norms”. She told the BBC: “I’m not sure Boris Johnson understands that having a challenging House of Lords actually improves government policy and improves legislation.”

The current Lord Speaker, John McFall, wrote to both Tory leadership contenders to urge them not to follow suit and inject their own influx of peers. Rishi Sunak is understood to have responded but Liz Truss has not.

Analysis by the Institute for Government found that in just three years, Johnson had already made 86 appointments to the Lords – equivalent to 10% of its current size.

Though the House of Lords appointment commission can advise against certain candidates being given peerages, the thinktank’s deputy director, Hannah White, said that “on his way out of Downing Street there will be even less incentive on Johnson to exercise restraint”.

A government spokesperson said that given the number of peers stepping down, some new members were essential to keep the expertise and outlook of parliament’s upper chamber fresh and ensure it could continue scrutinising legislation. The spokesperson added that successive prime ministers had drawn up dissolution or resignation lists for peerages.

CT Group has said its proposals for beefing up the Lords were an “early working draft” prepared for a thinktank to “aid discussion”.