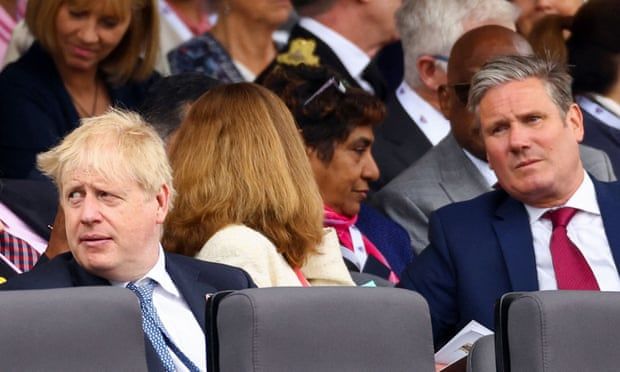 Labour ahead of Tories by two points, but Labour’s leader failing to make personal breakthrough
Boris Johnson makes a better prime minister than Keir Starmer would despite Partygate, the cost of living crisis and the confidence vote in Johnson held by his MPs, according to the latest Observer poll.

The Opinium figures, which will raise further concerns within Labour over the party leader’s performance, shows that the prime minister has a two-point lead over his opponent. It also reveals that Starmer’s party holds a narrow two-point lead, compared with a three-point lead in the last poll a fortnight ago. Labour are on 36% of the vote, with the Tories up one point on 34%. The Lib Dems are on 13% with the Greens on 6%.

While 28% think Johnson would make the best prime minister, 26% opted for Starmer.

Hopes for that encounter had been high following the confidence vote held by Tory MPs over Johnson’s leadership, a move that left the prime minister deeply wounded with 148 voting against him.

However, many within Labour’s ranks found Starmer’s performance to be flat and criticised his line of questioning. Even some Tory rebels were baffled by Starmer’s performance, saying it had helped Johnson regain some stability after the confidence vote. Angela Rayner, the Labour deputy leader, also suggested that Starmer looks too much like a lawyer in public appearances and should “put some more welly” into his speeches.

Another shadow cabinet minister agreed. “He is very much, ‘here is the problem and this is the solution’. But there’s no sense of what the wider project is.”

His team say Starmer’s main task has been repairing the party’s internal workings after the strife during Jeremy Corbyn’s leadership.

They are also targeting the party’s next conference in the autumn as the moment to set out more detail of their plans – adding that Labour is making progress with important groups of voters.

Recent polls also suggest the party has a clear double-digit lead in the 23 June byelection in Wakefield, the type of seat it will need to win back if it hopes to win a majority or form the government at the next election.

A senior Labour source said: “We know what needs to be done between now and the next election and are ticking everything off on the list.

“If you had said the morning after the 2019 election Labour could be back in one term, people would have laughed at you.

“But the work that Keir has been doing to reform the party, often without fanfare, means that we can seriously talk about winning the next election. The fact we’ve climbed out of the hole we were in was never a given.

“Having dealt with the party machinery at the last conference, the plan was always that the next one will focus on setting out our plans for Britain. There’s no complacency but we remain confident of the strategy we have to get Keir to No 10.”
#Boris Johnson  #Johnson
Add Comment