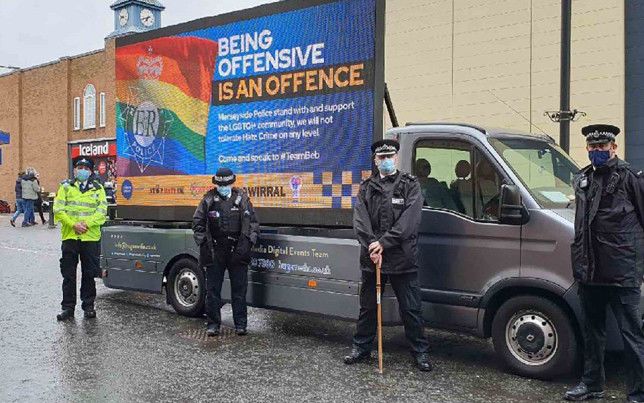 Police who wrongly said 'being offensive is an offence' apologise

A police force has apologised after launching a ‘chilling’ campaign that warned ‘being offensive’ was a crime.

One advert was displayed on the side of a van in solidarity with the LGBT community, encouraging people in the Wirral to report hate crime, telling them: ‘Being offensive is an offence.’

Following an outcry online, Superintendent Martin Earl was forced to issue a statement, saying Merseyside Police ‘would like to clarify that “being offensive” is not in itself an offence’.

He said: ‘A message on an ad van and social media this weekend by the local policing team on the Wirral to encourage people to report hate crime, although well-intentioned, was incorrect, and we apologise for any confusion this may have caused.

‘Hate crime is an offence and will not be tolerated. Hate crime can come in various guises that can include assault, criminal damage, verbal and written online abuse.

‘Our Hate Crime Co-ordinators draw on a wealth of experience and expertise to provide effective and above all sensitive and appropriate support for victims. 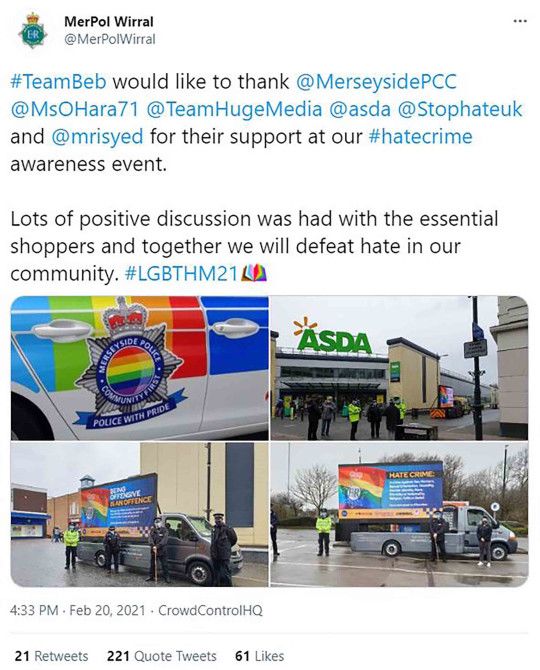 Merseyside Police posted images of the campaign on Twitter

‘We would also like to remind people we have a number of third party reporting centres including fire stations and activity centres which enable people who feel more comfortable discussing their issues with an independent party to come forward.’

The advert was intended as a show of support for the lesbian, gay, bisexual and transgender communities during LGBT History Month.

But it was condemned on social media, with one person describing it as ‘chilling’ while another called it a ‘horrible look’.

‘Utterly chilling,’ one person wrote online. ‘In a free society the right to be offensive is fundamental. This isn’t North Korea!’

Another wrote: ‘I often wonder if I’m being paranoid in my worries around virtue signalling and identity politics. Then I see drivel like this. Absolutely shameful.’