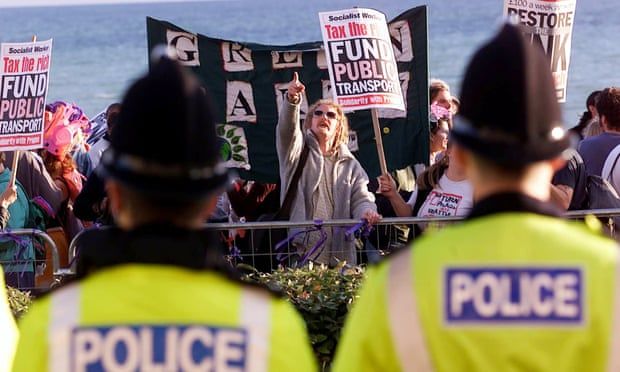 David Robertson accused of ‘sinister’ statement after appearing to be unmasked as undercover officer
An undercover officer terrified a woman with a “nasty” threat of violence to her family after she appeared to unmask him as a police spy, a public inquiry has heard.

The undercover officer, David Robertson, has also been accused of pulling her away forcefully by the wrist after she had identified him at a public meeting.

The allegations are denied by the officer, who infiltrated small leftwing groups, including the Revolutionary Marxist Leninist League, between 1970 and 1973. Robertson’s managers decided to end his covert deployment as a result of the incident.

On Monday, Diane Langford, a leftwing campaigner who was spied on by Robertson and five other undercover officers, gave details of what she called the “extremely sinister” incident.

She was giving evidence at the public inquiry – headed by former judge Sir John Mitting – which is examining the conduct of about 139 undercover officers who have monitored more than 1,000 political groups since 1968.

Langford said that, in February 1973, she attended a political meeting at the London School of Economics with a work colleague, referred to only as Ethel.

They saw Robertson while they were sitting together waiting for the meeting to start. “Ethel greeted him by the name ‘Dave’. He immediately pulled her away, forcefully by the wrist. She did not return. I will never forget her confused expression,” Langford said.

After a few days of silence, Ethel told Langford what had happened. “She said that Dave lived in the same block of flats as her … and that it was common knowledge among other tenants in the block that the flat he occupied was a ‘police flat’.”

“He had told her that if she said anything to me about his true identity, something bad would happen to her family in Ireland. She was clearly terrified by his threat and it was very courageous of her to tell me.” Langford called the threat “nasty”.

Langford added that the incident completely changed her perception of Robertson, who she and others already suspected was a police spy. “I had seen the other side of his character. He was no longer the person we had assumed to be, a fairly bland, hapless police officer, but a far more ruthless figure performing a sinister role.”

Robertson denies that he threatened Ethel or grabbed her by the wrist.

Last week, the inquiry heard that another undercover officer, Michael Scott, who also infiltrated leftwing groups in the 1970s, punched an activist who had accused him of being a police spy. Scott is due to give evidence to the inquiry at a later date.

Langford criticised Robertson over a secret report that he sent to his police supervisors. He had reported that a campaigner had made “a very personal attack on the private morals” of another leftwing activist. Langford said this actually concerned an allegation of attempted rape of the campaigner by the activist. “What does this description say about [Robertson]’s own views about sexual violence against women?” she said.

Robertson also reported to his supervisors that in 1971, Abhimanyu Manchanda, Langford’s then partner, who was also a leftwing activist, cared for their young child while she went to work. Her employment details were recorded.

Langford said: “I cannot see how reporting on details of my employment and my domestic arrangement with my family is in any way justified and I find it deeply intrusive.”

The inquiry, which in its current phase is examining covert operations between 1973 and 1982, continues.
Add Comment