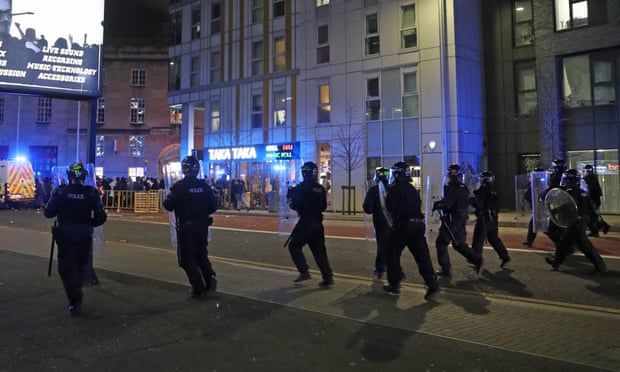 There was widespread outrage when the force made the claims in a press release on Monday that “a total of 20 officers were assaulted or injured and two of them were taken to hospital after suffering broken bones. One of them also suffered a punctured lung.”

But in an updated press release on Wednesday, the force clarified this was not true, saying: “Thankfully, following a full medical assessment of the two officers taken to hospital, neither were found to have suffered confirmed broken bones.” Around the same time, a BBC reporter said on Twitter that Andy Marsh, the head of the force, had admitted in a press conference that no officer had a punctured lung. However, the force has since updated the number of injuries suffered by police officers to 40.

The Guardian has contacted Avon and Somerset police for clarification on why these claims were made and to request a list of the injuries sustained by officers policing Sunday night’s protest. The force had not replied by the time of publication.

Kevin Blowe, the coordinator of Netpol, which campaigns around the policing of protest, said exaggerated claims of injuries by police were not without precedent. “It’s par for the course,” Blowe said. “People have flagged up the whole business of the injuries at Kingsnorth that were used to crack down on the protest there, which turned out to be insect bites [and] exhaustion.”

Regarding the claims of injuries at Bristol, Blowe said: “It does raise concerns that Avon and Somerset may have been trying to sell the case not only for their operation on the night, but for what happens next. Bristol is geared up for raids on homes.”

Saranya Thambirajah, a University of Bristol student who was at the protest on Sunday, said she was frustrated at how the false claims by police had come to dominate media reports of what happened.

She said: “It’s just frustrating because obviously Sunday was a very explosive day. No one expected things to go down the way that they did and it’s unfortunate that people got hurt. But the media narrative that came out was very much focused on the fact that these officers got broken bones, had punctured lungs, were very seriously injured. I think that’s what a lot of the public now associate those protests with and it’s the first thing people are going to think of, when in reality that’s not true.

“It’s frustrating because it takes attention away from the actual cause of the protest, why people were there, how the police treated protesters. There were a lot of protesters that were hurt as well, people were pepper-sprayed, people were battered by the police. No one was talking about that.”

Avon and Somerset police have said they are expecting further protests this week. “We are aware that some people may be intending to protest in Bristol and Bath this weekend, 26 to 28 March. Once again, we remind everyone that we’re still in a pandemic which has cost many lives and remains a significant challenge for our colleagues in the NHS,” said Ch Supt Claire Armes.

“We do understand the strength of opposition to the new legislation being debated in parliament. Protest is a right which we’re asking people to be responsible about exercising right now. This is about public health and public safety at a time of pandemic.

“I want to make it clear. Peaceful protesters will be given the opportunity to disperse, but Bristol will not tolerate violent behaviour and we’re here to prevent it.”
Add Comment