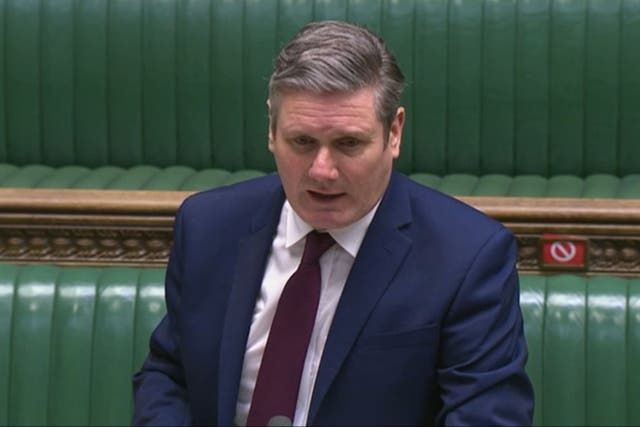 Sir Keir Starmer has urged the prime minister to strengthen victims' rights, as part of a bid to tackle violence against women.

The Labour leader said nine out of 10 women subjected to sexual violence do not feel confident coming forward.

Boris Johnson said he was "happy to look at new proposals" but insisted ministers have acted in this area.

And he urged a "cultural and social" change over how violence against women is dealt with.

At Prime Minister's Questions, he said he agreed with Sir Keir that the death of Sarah Everard should mark a "turning point" in how the issue is handled.

The 33-year-old marketing executive went missing while walking home from a friend's house on 3 March. Her body was later found in woodland in Kent.

Metropolitan Police officer Wayne Couzens, 48, has been charged with her kidnap and murder.

The Labour leader said the case should mark a "watershed moment" in how society deals with the "epidemic" of violence against women and girls.

Calling for politicians to "work together" on the issue, he urged the PM to back a "specific new law" on street harassment and "toughen" the law relating to stalking.

He also called for government support to help pass and implement a new law on victims' rights suggested by a Labour MP in under six months.

The bill, proposed by shadow victims' minister Peter Kyle, would enshrine rights set out in the Victims' Code in law and empower the government's victims' commissioner to launch their own investigations.

Mr Johnson said he would look at the proposals, but stressed action was already being taken, including £100m for advisers in sexual violence and domestic abuse cases.

He added although this would be "part of the solution," there also needed to be "long-term cultural and societal change to deal with this issue".

"Unless and until we have a change in our culture that acknowledges and understands that women currently do not feel they are being heard, we will not fix this problem," he added.

What would Labour's Victims' Law include?

Both leaders decided to speak calmly to show that they are finding common ground in dealing with societal issues of attacks on women.

But, judging by the arguments back and forth, there is no common ground.

From a political point of view, there is no agreement on how to tackle the issue of violence against women, and what the next steps should be.

Although the prime minster said he thought parties should work together on the issue, he did criticise Labour for voting against the government's policing and sentencing bill on Tuesday.

The wide-ranging bill, which contains proposals in a number of areas of criminal justice, has been given initial backing by MPs and will now face further scrutiny.

The prime minister said the legislation contained plans to toughen sentences for sexual and violent offenders and called Labour's decision to oppose it "crazy".

But Sir Keir said "nothing in that bill" would have increased sentences for those convicted of rape.

The Labour leader also criticised "shocking" official rape prosecution figures, adding that 98.5% of rapes reported to police do not lead to prosecution.

The prime minister said he recognised ministers needed to "sort it out" and insisted the government was trying to accelerate the speed at which cases are dealt with.

Was Starmer right on rape statistics?

Sir Keir Starmer told MPs that "only 1.5% of rapes reported to the police lead to a prosecution".

The prime minister agreed that "the prosecution rates for rape were a disgrace".

The statistic to which they are referring comes from Crime Outcomes in England and Wales, 2019-2020.

It shows that the proportion of rape complaints that led to a charge or court summons in the year to the end of March 2020 was 1.4%.