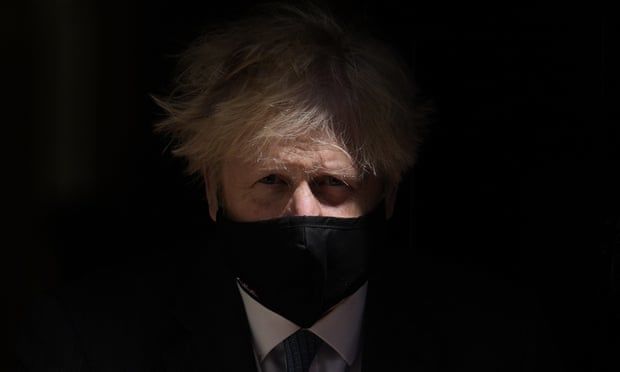 PM said test and trace would be ‘like whistling in the dark’, says Cummings

Former adviser publishes contents of April 2020 email from Boris Johnson expressing concern over Matt Hancock’s plans for testing
Boris Johnson believed the national test-and-trace system was “like whistling in the dark” and that the UK was on course to achieve the “double distinction of being the European country with the most fatalities and the biggest economic hit”, he reportedly told Dominic Cummings at the height of the pandemic’s first wave.

The prime minister allegedly expressed his view in an email to his closest adviser in April 2020 amid concern in Downing Street over serious shortcomings in plans for mass testing by Matt Hancock’s Department of Health and Social Care.

Publishing what he said were Johnson’s words, Cummings said the prime minister confided that he feared the proposed system to track down Covid cases and stop transmission was like “legions of imaginary Clouseaus [fictional French detectives] and no plan to hire them”.

Johnson reportedly complained of “apps that don’t yet work” and “above all no idea how to get new cases down to a manageable level or how long it will take … by which time [the] UK may have [the] secured double distinction of being the European country with the most fatalities and the biggest economic hit”. He concluded: “We GOTTA turn it round.”

The email, sent on 26 April 2020, was published on Friday by Cummings in a new blogpost entitled: “More evidence on how the PM’s & Hancock’s negligence killed people.”

His gloomy assessment contrasted strongly with the prime minister’s public statement the next day that “if this virus were a physical assailant, an unexpected and invisible mugger … then this is the moment when we have begun together to wrestle it to the floor”.

Cummings also revealed that he warned Johnson the government was “negligently killing” care home residents in the first wave of pandemic due to a failure by Hancock’s department to organise Covid testing.

Cummings told the prime minister on 3 May 2020 by WhatsApp: “these goddam plans should already exists … but I don’t think they do” and that “at the moment I think we are negligently killing the most vulnerable who we’re supposed to be shielding and I am extremely worried about it”.

At the time of the warning there was desperation in care homes where more than 2,000 residents in England and Wales were still dying from Covid each week. Care operators warned on 5 May that more than three-quarters of care staff were not being tested despite a promise by Hancock three weeks earlier that there was capacity for all of them.

“He cannot claim ‘nobody told me’,” said Cummings in the blogpost. The revelations came as Downing Street gave its backing to Hancock after he apologised for breaking social distancing guidelines when he kissed a colleague last month.

A few days after Cummings’ warning about care home deaths, the Guardian reported care operators’ anger that testing was “a complete system failure” even though Hancock had promised tests for all care residents from 28 April. With care staff unable to detect who had the virus, deaths of care home residents from the virus didn’t drop below 1,000 until the end of the month.

Care operators responded to the revelations by noting that weeks later Johnson publicly blamed care operators for deaths, saying “too many care homes didn’t really follow the procedures in the way that they could have”.

“If these messages are accurate, it’s clear that the PM was aware of the risk to vulnerable people due to a lack of testing capacity,” said Nadra Ahmed, the executive chairman of the National Care Association, who recalled that it had been impossible to know who had the virus as testing was taking more than 10 days in some cases. “The tragedy of this is the potential that lives were lost unnecessarily because these problems weren’t recognised or rectified.”

According to his blog, Cummings told the PM on 7 May 2020 that Hancock was “unfit for this job” and that him staying in place was “killing god knows how many”, although he didn’t provide any documentary evidence to support that.

He said that after returning from illness with Covid on 13 April, the following couple of weeks of meetings with Hancock left “many people” concluding that on testing in care homes, “operational delivery was terrible” and “we were therefore killing people we claimed to be shielding”.

“The PM agreed that Hancock’s failures were a catastrophe but refused to fire him,” Cummings claimed.
#Covid  #Boris Johnson
Add Comment