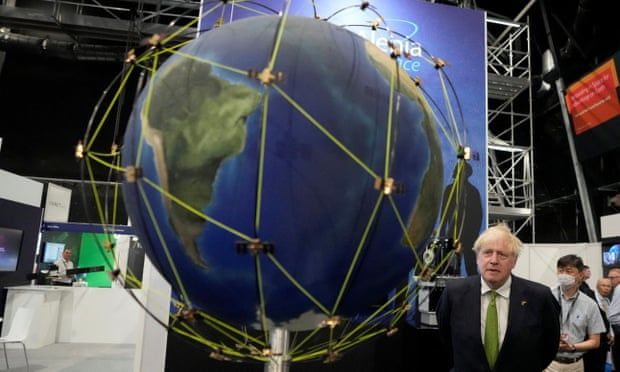 Boris Johnson regales Farnborough airshow with tales of Typhoon jet in speech brimming with metaphors
Boris Johnson has joked about sending critical Conservative MPs into space and recalled doing a “fantastic loop the loop” in an RAF Typhoon as he reflected on his premiership in a valedictory speech.

While the race to replace him as prime minister narrowed in Westminster, Johnson told attendees at the Farnborough airshow that after “three happy years in the cockpit and after performing some pretty difficult if not astonishing feats”, he was “going to hand over the controls seamlessly to someone else”, but he added: “I don’t know who.”

In a typically Johnsonian speech peppered with jokes, metaphors and rogue historical references, he likened the pace of technological change in aviation to a fight between a “Tyrannosaurus rex and a killer whale”.

Describing the flight he took from RAF Coningsby in Lincolnshire last Thursday, he said: “Straight up like a vertical firecracker, we slipped the surly bonds of Earth – as the poet Magee puts it – and danced the skies on laughter-silvered wings.”

The wing commander onboard asked him if he wanted to have a go, but Johnson checked if he was sure because the jet cost £75m and there were only 148 in the RAF’s fleet. “Don’t worry, you can’t break it,” he was told.

“I thought, ‘Oh well, famous last words,” the prime minister said, recounting manoeuvring the gear stick to do “an aileron roll”, “a fantastic loop the loop” and then “a more complicated thing called a barrel roll”.

He said: “We started to pull a few Gs, as they say, and when I came back to consciousness I could see the sea getting closer and closer.” Johnson recalled the view this gave him of windfarms and his fondness for “clean, green energy” that would help end “any dependence” on imported Russian oil and gas.

“This reverie must have gone on for a while because my colleague said, ‘Er, I am taking back control now’, and we headed happily home,” Johnson said.

He asked how the Typhoon would fare against the first RAF plane he rode – an F-15E Strike Eagle – 25 years ago in South Carolina and likened it to the question of “what would happen in a fight between a Tyrannosaurus rex and a killer whale”.

Johnson said: “They said it would be no contest.”

In a wry dig at his critics, among them several Tory leadership contenders, the prime minister spoke of his hope for the UK to launch its first satellite, adding: “And I leave it to you to imagine who, at this stage, I would like to send into orbit. Perhaps a volunteer could be found from the green benches of parliament. I leave that entirely to your speculation.”

Johnson did have a serious message to deliver, stressing that given the temperatures in England are “higher than the Sahara”, there was an important need to address what he called the “carbon tea cosy that is heating our planet to destruction”, caused in part by aircraft emissions.

He said: “We know that we must fix it; we know that time is running out.”
#Boris Johnson  #Johnson
Add Comment