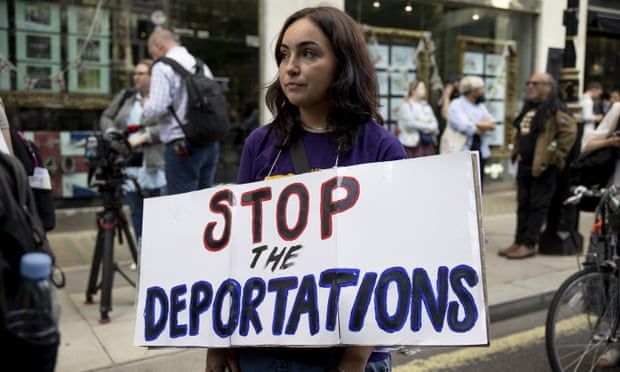 An Albanian asylum seeker and suspected victim of trafficking has told the Guardian he is in a “very bad mental state” as he expects to board a deportation flight to Rwanda, a country of which he knows “nothing”.

The 26-year-old Albanian man is one of seven asylum seekers who have launched last-minute legal challenges to avoid being forcibly flown to the east African country. Others include three Iranians, one Iraqi and one Vietnamese asylum seeker. All arrived in the UK on small boats in the middle of May.

Suspected victims of trafficking are supposed to have their cases fully investigated before they can be removed from the UK.

The Albanian man said: “I was exploited by traffickers in Albania for six months. They trafficked me to France. I did not know which country I was being taken to.”

He said that when he was put on a small boat in northern France he was given to understand that other traffickers would be waiting for him when he arrived in the UK. “I’m in a very bad mental state. I knew nothing about Rwanda. I have never been to Africa and I don’t think it will be safe for me. I can’t return to Albania because the traffickers there will kill me. The only safe place for me is the UK. How can they send an Albanian to Africa?”

The man said he had thought of taking his own life rather than being put on the plane.

One of the Iranian men due to fly said: “I expected support from the UK government but I didn’t receive any, so I am asking the British people to support me instead. I have a son in the UK, but if I’m sent to Rwanda I will not be able to see him. I have a lot of stress and both my son and I have a very bad mental health situation. My family in Iran are very worried about what is happening to me in the UK. I always thought there was justice here but I have found no justice in this country.”

A second Iranian man, who is also scheduled to be deported, said: “I was involved in peaceful, democratic politics against the Iranian regime. The government executed my cousin, and detained and tortured my uncle for four years.

“If I stayed in Iran, they would execute me too, or at the very least sentence me to 30 years in prison. I ran away from a brutal regime. I am not a criminal. I want the UK government to know that I only want to live in peace. Because of the good diplomatic relationship between Iran and Rwanda I’m worried that if I’m sent to Rwanda … the Rwandan government will send me back to Iran.”

Another expected deportee, a 25-year-old Iraqi Kurdish man, said he fled Iraq after receiving threats from relatives who were high up in government. He came to the UK because his sister lives there. Of the 53 people in the boat he travelled in, 14 were detained while the others were placed in hotels. He finally found a lawyer who lodged an urgent injunction application for him. He is a potential victim of trafficking.

He said a group of six detainees, all due to fly on Tuesday evening, were being held in Colnbrook immigration detention centre near Heathrow airport. “Nobody can sleep. We all have nightmares if we close our eyes. We are all mentally exhausted,” he said.

“We are all feeling so bad that they are sending us by force to Rwanda. It is too much to think about. My message to anyone who will listen is: ‘Please stop the plane.’”