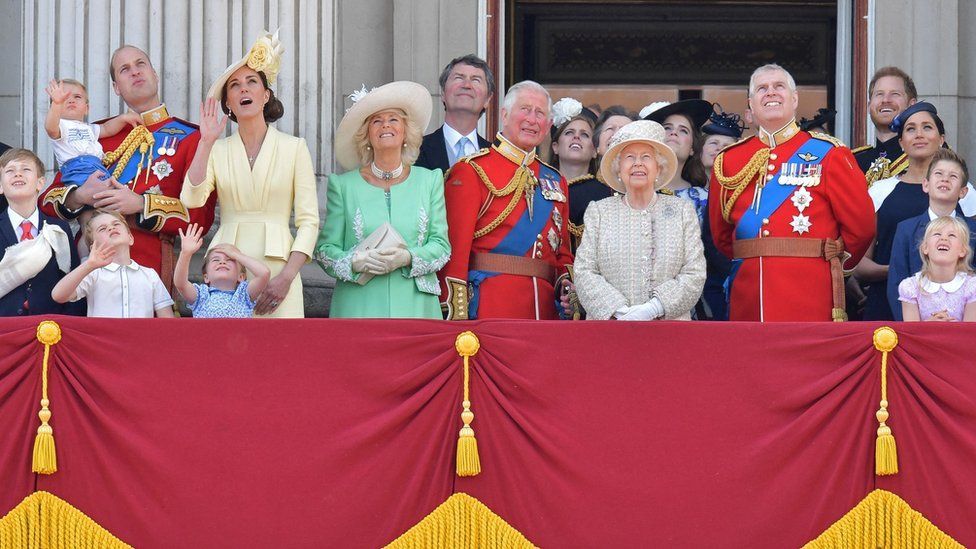 Platinum Jubilee: Who will be with the Queen on the balcony?

From royal wedding kisses to celebrations at the end of wars, the balcony at Buckingham Palace in London has been the stage for national moments since Queen Victoria first stepped out there in 1851.

For the Platinum Jubilee, the balcony will once again provide the photo frame for a big occasion, with Queen Elizabeth II and 17 other members of the Royal Family due to appear on Thursday after Trooping the Colour.

"There's been a lot of chat about who is going to be there and who is not," says Pauline Maclaran of the Centre for the Study of Modern Monarchy at Royal Holloway, University of London.

Only "working royals" and their children will appear, which excludes the Queen's son Prince Andrew, and her grandson Prince Harry, and his wife Meghan, the Duchess of Sussex. 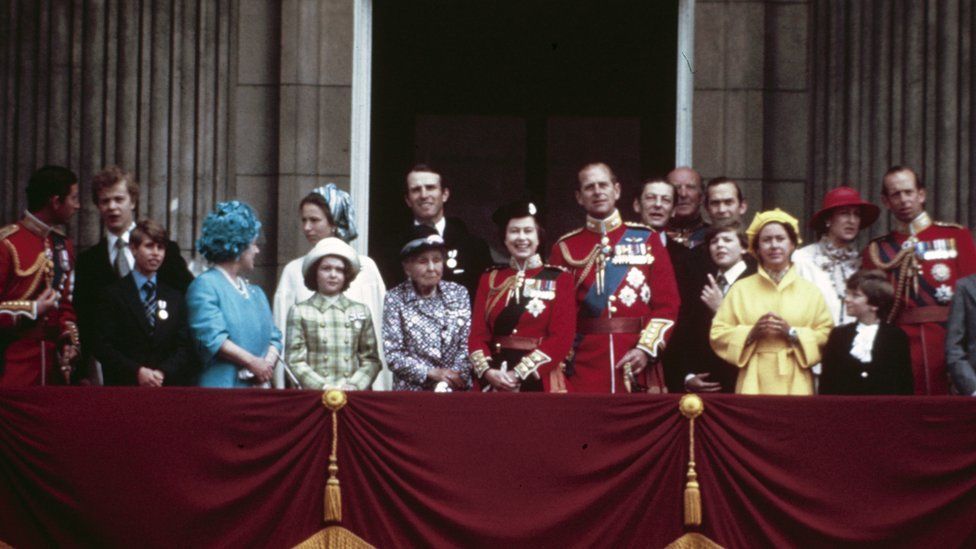 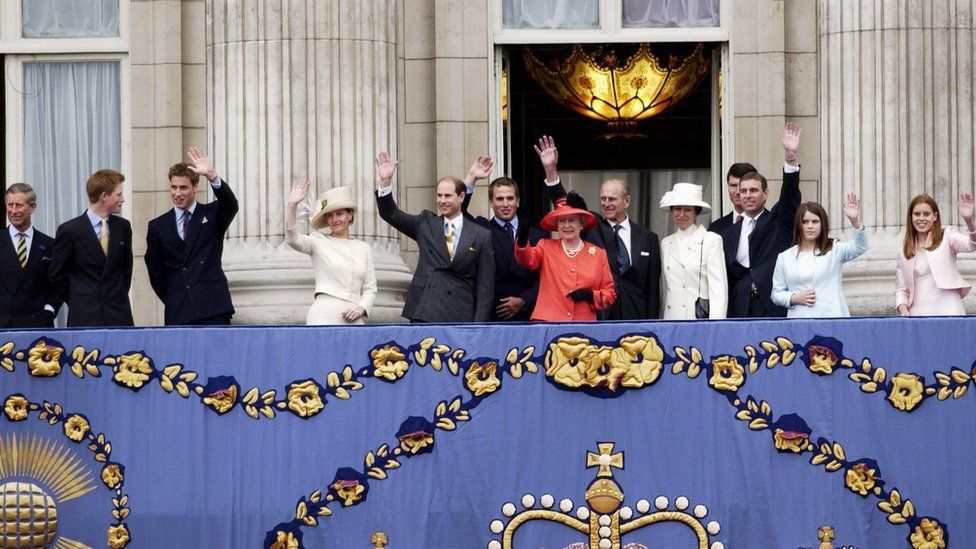 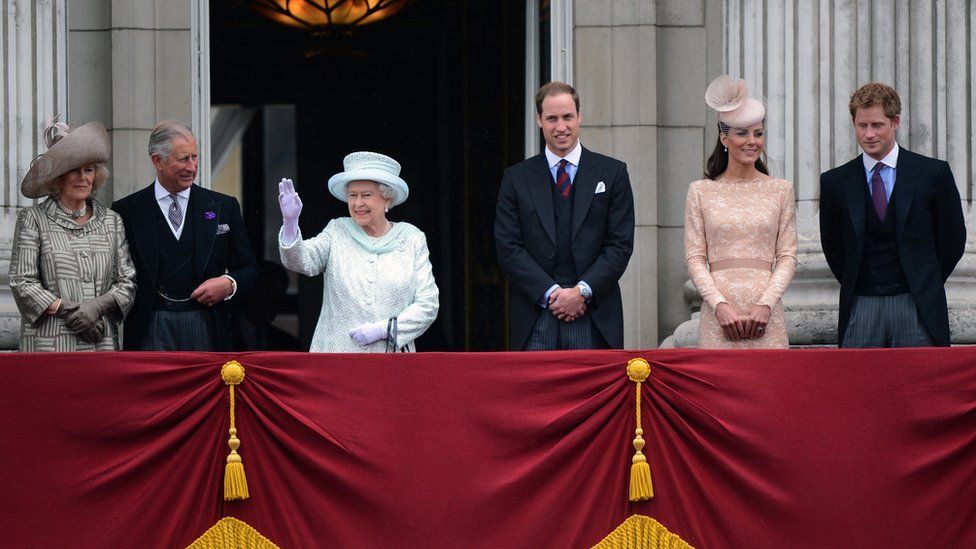 Only six of them appeared for the Diamond Jubilee in 2012

This is a "tactful" way of dealing with controversies surrounding the trio, says Prof Maclaran. Prince Andrew stepped down in the wake of the US sex assault civil court case; Prince Harry and Meghan withdrew from their royal roles and have moved to the US.

"Balcony displays are used very strategically by the Royal Family. They're very well aware this makes a statement, it's so important," says Prof Maclaran.

"This is one element they can control, so there are no ambiguous signals," she says. "If they allowed Prince Andrew, you can imagine the response," she says. And for Harry and Meghan it shows there are no "half-in, half-out" royals.

There have been more than 40 people on the balcony on previous occasions, so limiting the numbers overall is also a deliberate choice.

It sends a message about who are the most important players on the royal stage. It's not just a line up, but a line of succession.

There are suggestions the Queen could make a second balcony appearance on Sunday, putting the succession in tight focus, alongside her heir Prince Charles, her grandson Prince William and great-grandson Prince George.

"It's all very symbolic. It shows the durability of the monarchy, even though the faces change," says Prof Maclaran.

The balcony is very much a royal space. Only two prime ministers have made it on to the balcony - Neville Chamberlain, after negotiating the Munich Agreement with Germany in 1938, and Sir Winston Churchill as crowds celebrated the end of war in Europe in 1945.

There are no formal rules for where people stand, but Prof Maclaran says a clear pattern is discernible.

There might be young children stealing the limelight by pulling faces, and there may be suspicions about some jockeying for a spot close to the Queen, but there is an underlying "order of precedence", says Prof Maclaran. 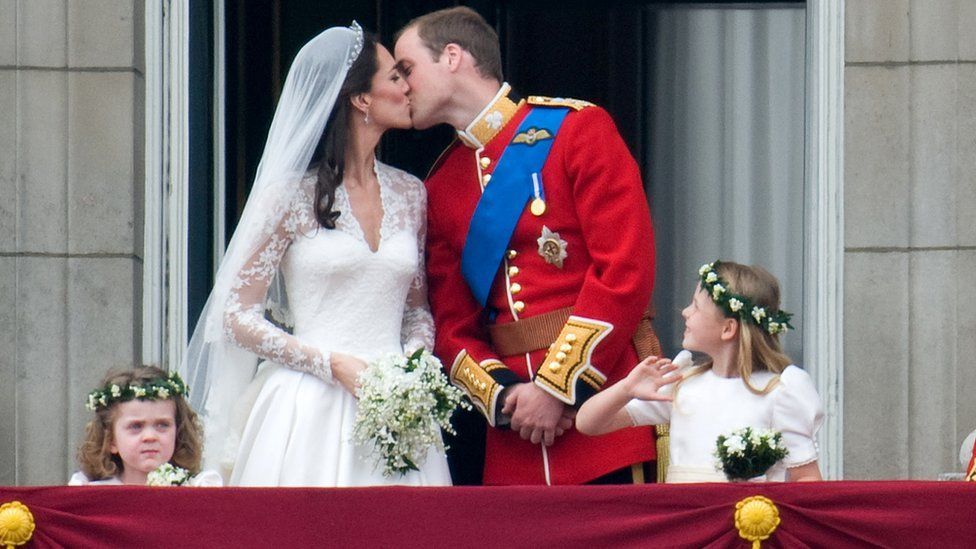 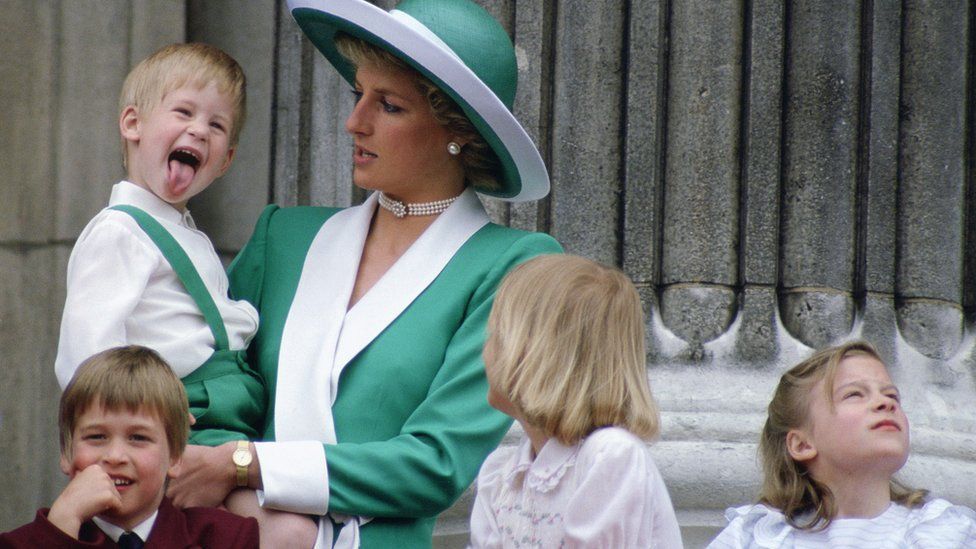 Although children can sometimes steal the limelight by pulling faces

It's an unspoken choreography that senior royals take their places at the central area of the balcony while the rest of the family fan out around the edges, like they're being organised into place by an invisible wedding photographer.

The only exception to the Queen being centre-stage is a royal wedding when the married couple are the balcony stars.

For the jubilee, among the 17 invited to appear will include the Queen's son and daughter-in-law Earl and Countess of Wessex and their two children, and her daughter Anne, the Princess Royal, and her husband, Sir Timothy Laurence. There will also be the Queen's cousins the Duke and Duchess of Gloucester, and the Duke of Kent and Princess Alexandra, who carry out royal engagements on her behalf.

This is more than there were for the Diamond Jubilee in 2012. In the shadow of austerity, there were only six people on the balcony, which was seen as showing a frugal, pared-down image of royalty.

There is another important character not on the balcony - and that's the crowd.

Balcony moments are about "the public honouring the royals and royals honouring the public," says Heather Jones, author and history professor at University College London.

For a monarchy that depends on public consent, this is one of the biggest symbolic stages where the royal family and the public can connect.

Prof Jones says that on big occasions, such as the outbreak of the First World War, it has been the crowd that has demanded the appearance of the Royal Family. She says in 1914 King George V recorded in his diary that he felt the crowd had forced him to appear on the balcony, as the country prepared for war.

When crowds were celebrating the defeat of Hitler in the Second World War, the public were so insistent that there were eight separate balcony appearances.

"There's a sense of running to Buckingham Palace, for these big national moments," she says. 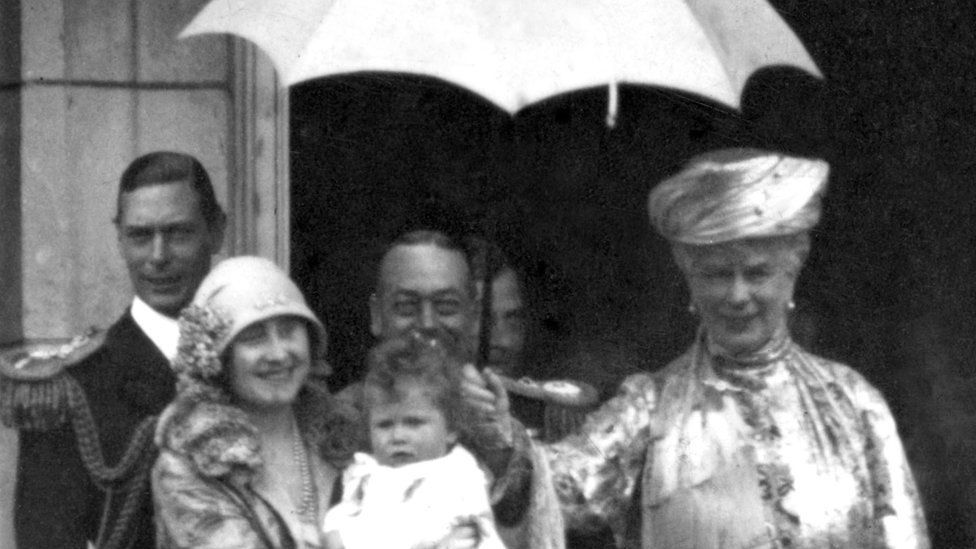 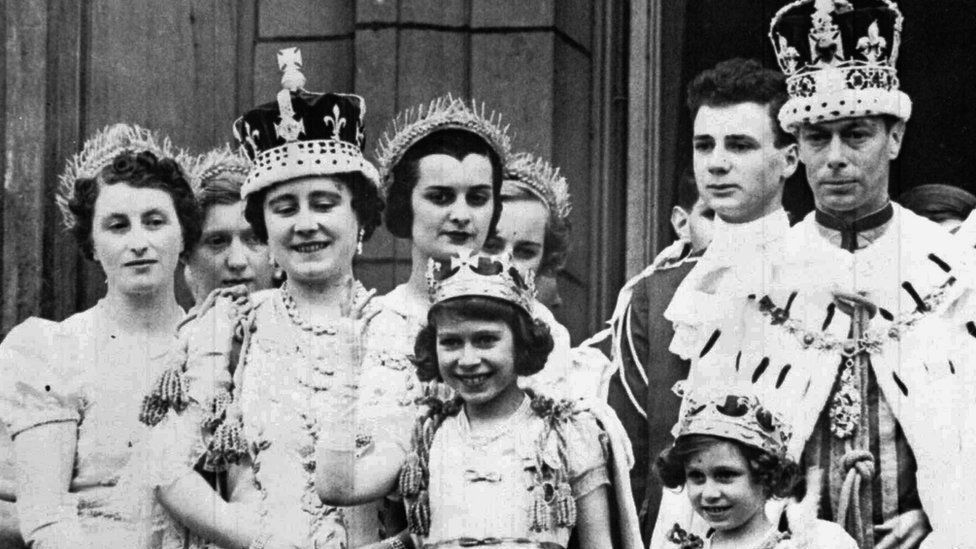 And in 1937, centre, on the balcony for her father's coronation

The balcony works well as a platform for projecting the monarchy, says Prof Jones. It makes the royals visible but at the same time keeps a sense of distance.

They might seem accessible, but the balcony remains high and out of reach. It helps maintain that royal balancing act of wanting to be relatable as the "national family", but at the same elevated and special.

The crowds this weekend will expect a wave back from the balcony. But that wasn't always the case.

Royal historian Ed Owens says it wasn't until 1934 that the first wave to the crowd came from Princess Marina, the current Queen's aunt by marriage. Until then acknowledging the crowd below had been limited to "bowing a little and smiling awkwardly".

On newsreels after that date you can see royals experimenting with different forms of waving, including the Queen as a girl trying out the type of rotating wave that looks like unscrewing an light bulb.

There are more recent rituals. Prince Charles and Diana became the first to kiss on the balcony after their royal wedding, beginning a tradition followed by Prince Andrew and the Duchess of York and then Prince William and the Duchess of Cambridge.

Collectively these balcony images become like a national family photograph album. Changing generations of royals mark the milestones of family life and mime their thanks to the crowd. Fashions and faces change, but the impression stays the same.

"It's such an expertly choreographed moment," says Mr Owens. It takes decades of practice to look so spontaneous.