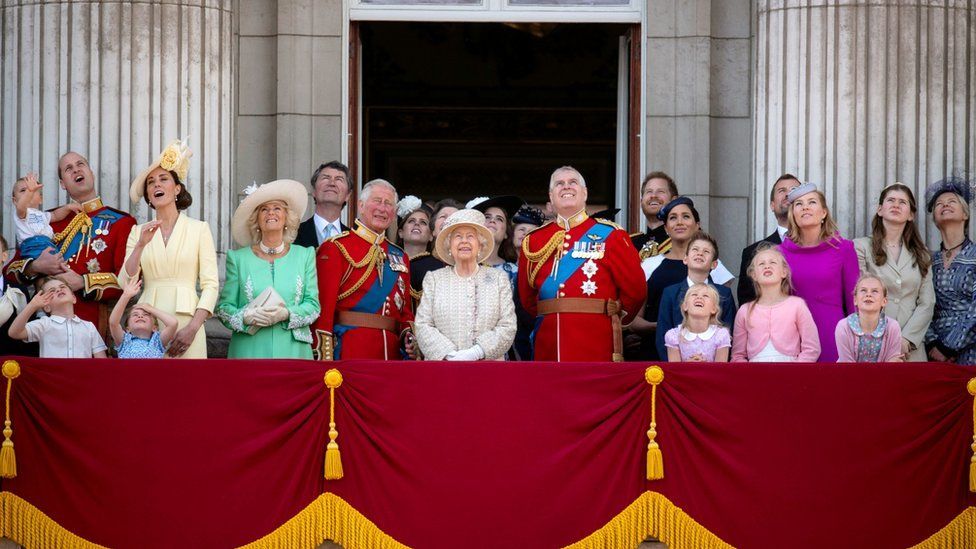 Platinum Jubilee: Harry and Andrew will not appear on Buckingham Palace balcony

Prince Harry and Prince Andrew will not appear on the Buckingham Palace balcony as part of opening celebrations for the Queen's Platinum Jubilee.

The monarch will be joined on 2 June only by "members of the Royal Family who are currently undertaking official public duties", Buckingham Palace said.

Despite not appearing on the balcony, Prince Harry and his wife Meghan will travel to the UK for the Jubilee.

The Queen, 96, plans to attend some Jubilee events, the palace said.

But her attendance won't be confirmed until nearer the time, or even on the day, after mobility problems led her to cancel a number of appearances in recent months. 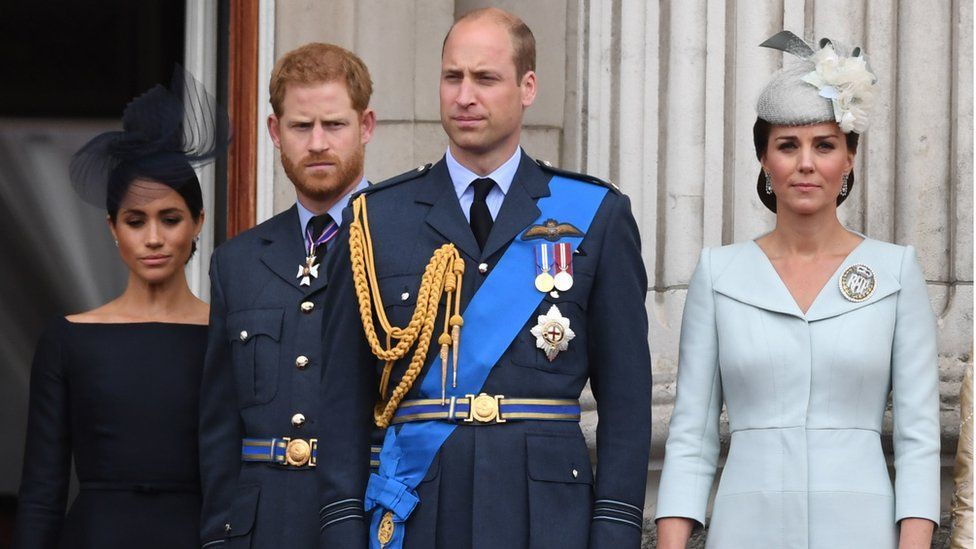 Harry and Meghan will not be on the balcony this time, but are travelling to the Jubilee

A spokesperson for the Duke and the Duchess of Sussex said they would be coming to the UK for the Jubilee with their two children, Archie and Lilibet.

The couple were said to be "excited and honoured to attend the Queen's Platinum Jubilee celebrations".

The Platinum Jubilee events, marking the Queen's 70-year reign, will take place over a four-day bank holiday on 2 to 5 June.

There had been speculation about who would take part in the iconic royal balcony scene at the start of the Jubilee weekend, watching a flypast and waving to the crowds at Trooping the Colour.

But Buckingham Palace said the Queen had decided that appearances on the balcony would be limited to "working royals", who carry out official royal duties, and their children - effectively ruling out Prince Andrew, Prince Harry and Meghan.

Prince Andrew stepped down from royal duties in the wake of the now-settled civil sex assault case brought against him in the United States.

The Queen's decision reflects the principle that there will not be "half-in, half-out" royals - and will mean a changed line-up for such balcony appearances for the Royal Family.

On the balcony, along with the Queen, will be the Prince of Wales and the Duchess of Cornwall, the Duke and Duchess of Cambridge and their children. 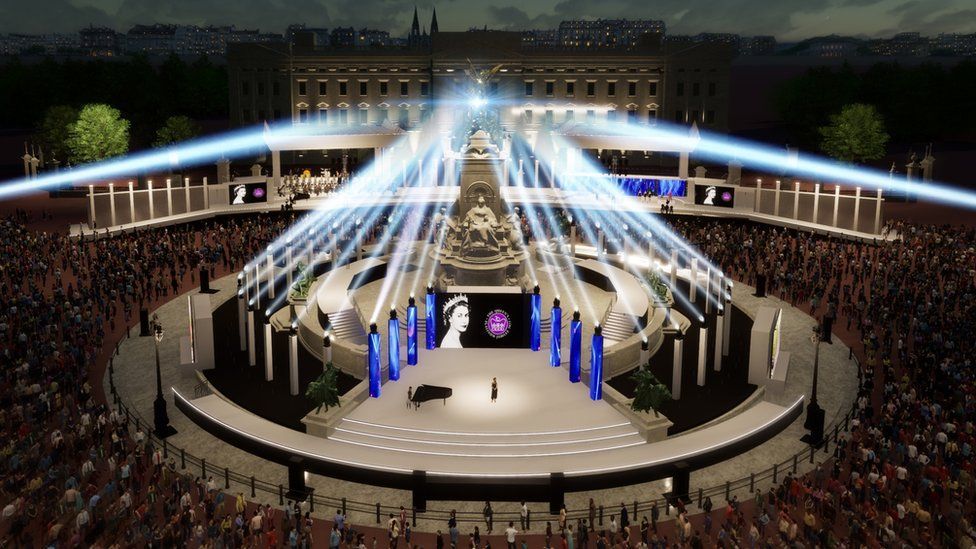 The group will also include the Earl and Countess of Wessex and their children, and Anne, the Princess Royal, and her husband, Sir Timothy Laurence, plus the Duke and Duchess of Gloucester, the Duke of Kent and Princess Alexandra.

While Prince Harry and Prince Andrew, and his daughters Beatrice and Eugenie, will not be part of the balcony scene, they could attend other Jubilee events, such as the Jubilee Lunch or the thanksgiving service.

The Queen, who has mobility problems, has had to pull out of a number of recent events - and there have been questions about how much she will be able to participate in Platinum Jubilee celebrations.

The latest update leaves the question open - with the Queen planning to take part in some of the events, but with nothing being confirmed until much closer to the time.

This includes the National Service of Thanksgiving at St Paul's Cathedral - and if the Queen attends she will not take part in a ceremonial procession to get there. 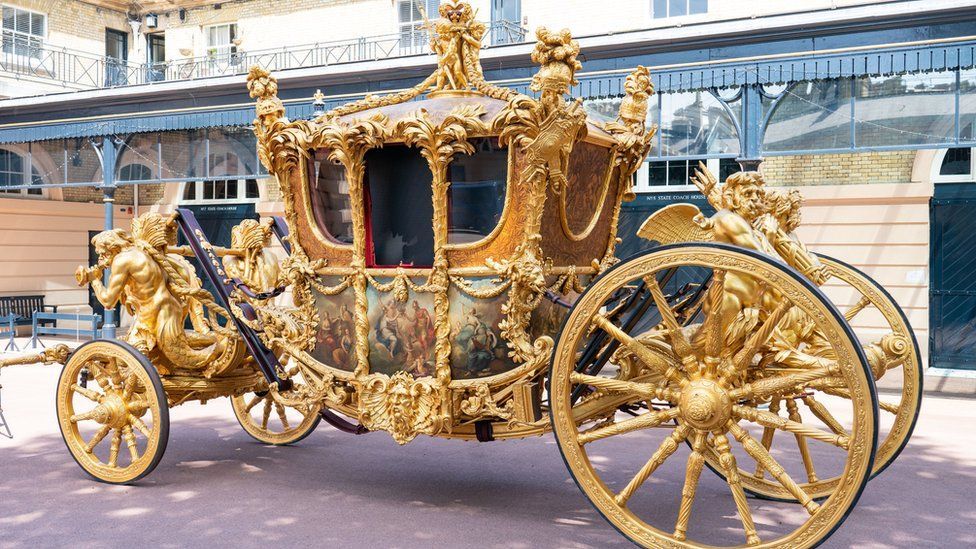 The Gold State Coach, used in the Queen's coronation, will be part of the Jubilee Pageant

Along with viewing Trooping the Colour, the Queen also plans to attend the Epsom Derby, which takes place on 4 June, during the long Jubilee bank holiday weekend.

The Platinum Jubilee Pageant will see the re-appearance of the Gold State Coach, not seen on the streets of London for more than 20 years.

This was the 18th Century horse-drawn carriage used to carry the Queen to her coronation in 1953.

Thursday 2 June - Queen's birthday parade and Trooping the Colour takes place - as Platinum Jubilee Beacons across in 2,000 towns and cities light up

Friday 3 June - National Service of Thanksgiving is held at St Pauls. Ringing of Great Paul, the restored biggest church bell in the country