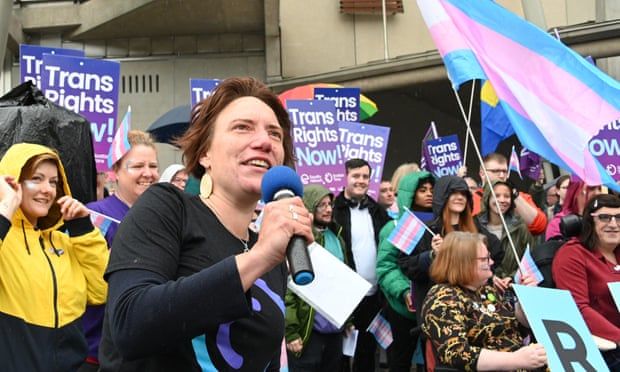 People can self-identify as male or female in Scottish census, says guidance

Answer to sex question can differ from birth certificate, without need for gender recognition certificate, says NRS
People can answer the male or female question in Scotland’s 2022 census based on how they identify themselves rather than according to legal status, according to new guidance from the body responsible for the survey.

Issued by the National Records of Scotland (NRS) on Tuesday, the guidelines tell people to answer the sex question according to how they self-identify, regardless of the details on their birth certificate or whether they have a gender recognition certificate.

“If you are transgender the answer you give can be different from what is on your birth certificate,” they say. “You do not need a gender recognition certificate (GRC).

“If you are non-binary or you are not sure how to answer, you could use the sex registered on your official documents, such as your passport.” A person’s sex on their passport can be altered without a formal legal process.

The census, which was delayed for a year because of the pandemic, also includes a voluntary question about transgender status or history for the first time, for those aged 16 or over.

Similar guidance for the England, Wales and Northern Ireland census had to be changed weeks before the official day to complete it on 21 March after a high court challenge brought by the campaign group Fair Play for Women successfully argued the advice “conflated and confused” sex with gender identity.

Equalities groups in Scotland have argued that trans men and women should continue to be allowed to answer the compulsory sex question with the sex in which they live and identify, as they were in the 2011 census under previous guidelines.

Research undertaken for NRS suggests three times as many trans and non-binary people would be willing to answer the sex question with self-identification guidance.

“This means trans people can answer the sex question in a way that best reflects how we live our day-to-day lives … This provides the most useful information about trans people – as we lawfully interact with public bodies, use services, and update our identity documents in this way.

“Where people want to know if there are any differences between trans people and the general population, the new question on trans status and history will allow this information to be separated out and compared. Most estimates place trans people as less than 1% of the population [and] including us in this way will have no impact on overall data quality.”

Mackenzie said: “Following a successful challenge brought earlier this year by campaign group Fair Play for Women in the English high court on similar guidance proposed for use in the census in England and Wales, the Office for National Statistics was forced to concede that ‘sex’ in the Census Act 1920 means simply ‘sex as recorded on a birth certificate or gender recognition certificate’.

“Alignment between UK censuses has already been compromised by the delay to the census in Scotland. It is difficult to see how the Scottish government can claim that their reframing of the sex question in the 2022 Scottish census is compatible with the Census Act 1920.”
Add Comment