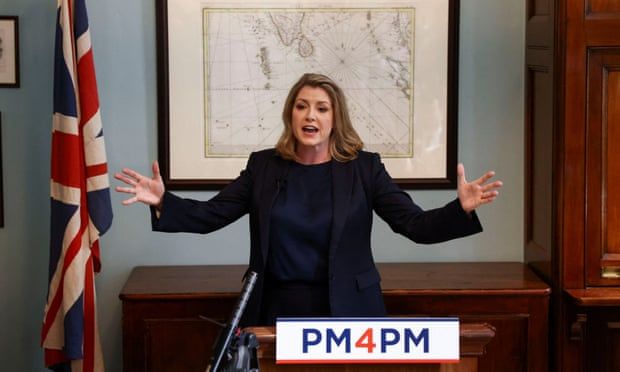 Analysis: confident message from MP relatively untainted by association with Johnson seems to resonate with many Tories
Penny Mordaunt’s team seemed as surprised as anyone that she had overhauled Liz Truss to come second in the first round of voting to be the UK’s next prime minister – but after she consolidated her position on Thursday, they now believe she could go all the way.

With the policy debate depressingly narrow – tax cuts now v tax cuts soon – MPs are assessing candidates on their election-fighting credentials. That means style as well as substance; and here, Mordaunt seems to have captured something that appeals to Tory MPs’ current mood.

Theresa May’s pitch in 2019 was essentially what was later called “strong and stable leadership” – after the dilettantish David Cameron, and with the Conservatives plunged into crisis after the Brexit vote.

With her bracing good humour, Mordaunt is promising to give her party back its self-confidence after the meltdown of recent months – a message that seems to resonate, particularly when wrapped in a comforting blanket of patriotism.

Her recent book, Greater: Britain After the Storm, included few concrete policy proposals but was peppered with mentions of freedom (“the light through which the human soul sees”) and “modernisation”.

At her campaign launch on Wednesday, she took plenty of questions and parried them wryly – contrasting with the more senior Liz Truss’s woodenness at her own speech the next day.

With less than two years in the cabinet under her belt, under Theresa May, Mordaunt can hardly claim to be battle-hardened by ministerial experience at the highest level – but, by the same token, is less tainted by the humiliating chaos of recent months.

She is a trade minister – but unlike Liz Truss, Rishi Sunak, Suella Braverman or the ill-fated Nadhim Zahawi, did not sit in Boris Johnson’s cabinet, or form part of his inner circle.

Johnson dispatched Mordaunt to the backbenches in his first brutal reshuffle in 2019, after she backed Jeremy Hunt against him in the leadership contest. (Hunt has not returned the favour, swinging behind Sunak on Wednesday after winning just 18 votes in the first round.)

The YouGov polling of Tory members that sent such a frisson through Westminster on Wednesday put Mordaunt top, backed by 27% of members, and Kemi Badenoch – also outside the cabinet – second, on 15%.

While the Daily Mail has been screaming of betrayal (the headline on the day Johnson resigned was: What the Hell Have They Done?), it may be that grassroots members would like a fresher start than anyone who served in Johnson’s cabinet could offer.

Mordaunt’s Brexit credentials are, of course, impeccable, having repeatedly claimed (falsely) on TV during the referendum campaign that the UK could not veto Turkey joining the EU.

Tory MPs may also feel the social-classless Mordaunt is a better bet than the fabulously wealthy Rishi Sunak to hold on to “red wall” seats, but that her military background and no-nonsense demeanour may go over well south of Watford, too.

Her own seat, in Portsmouth, is socially diverse, and she has campaigned for more action on the cost of living crisis – though it is unclear what specific measures she would plan to take, aside from tax cuts.

Some Tories also believe Mordaunt would have the capacity to wrongfoot Labour. Keir Starmer had well-prepared attack lines on Sunak and Nadhim Zahawi at Wednesday’s prime minister’s questions, over their tax affairs.

Mordaunt may be harder to pigeonhole – though senior Labour figures say the famously forensic Starmer would eventually be able to find a way of taking her apart.

With the contest crunched into such a short timeframe, though, for the time being Mordaunt will be able to rely on her brisk but reassuring persona – and the fact she kept a safe distance from the crumbling Johnson regime.
#Boris Johnson  #Johnson
Add Comment