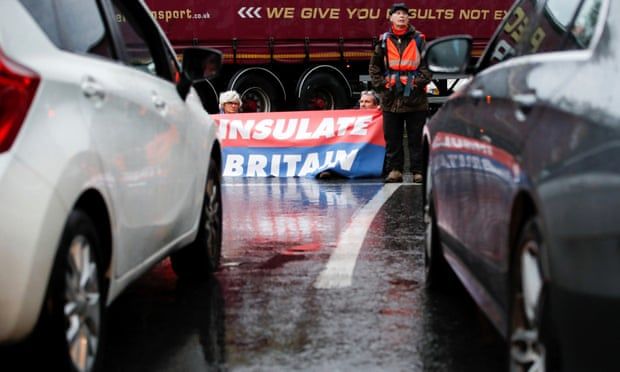 Government will introduce tougher powers to deal with climate change activists who block major roads
Protesters disrupting motorways will face up to six months in prison or unlimited fines under plans to stop climate campaigners bringing traffic to a halt, Priti Patel will say this week.

The home secretary said she would amend new legislation to bring in tougher sentences and give police powers to seize equipment that protesters could use to lock themselves on to fixed objects.

In recent weeks the home secretary has applied for court injunctions to stop Insulate Britain campaigners from bringing motorways to a standstill. The current fines for blocking a highway are up to £1,000.

The injunctions and arrests have not stopped the activists, who are calling on the prime minister to “get on with the job” of insulating Britain’s “leaky” homes.

Before the announcement, Boris Johnson said: “This government will always stand on the side of the law-abiding majority and ensure the toughest penalties possible for criminals who deliberately bring major roads to a standstill.”

Johnson insisted the right to protest was “sacrosanct” but there was “no right to inflict chaos and misery on people trying to go about their lives”. He added: “We will give the police the powers they need to stop their reckless and selfish behaviour.”

The Tories are proposing to make the change through the police, crime, courts and sentencing bill, which will grant the police additional powers.

As well as the tougher sentencing, officers will get more stop-and-search powers to check whether protesters are carrying equipment such as handcuffs or glue that could be used in their protest to make them difficult to move. Police will also be able to remand protesters in custody rather than releasing them after charge.

Another change will be made to stop protesters being able to cause disruption on a road when it has been closed by police in order to prevent a demonstration.

Other crimes that typically carry a six-month sentence include a second offence of possessing a weapon or threatening with a weapon.

Patel, who has been a persistent critic of the Insulate Britain protesters, said the government “will not tolerate guerrilla tactics that obstruct people going about their day-to-day business”.

A spokesperson for Insulate Britain said the group “appreciates the difficult position” that Patel is in and argued it too “shares her passion” for upholding law and order.

But the campaign group, which has seen dozens of its members arrested for blocking motorways in recent weeks, said the threat to society posed by the climate emergency was much greater than the threat of punishment from the government.

“We must face the reality Sir David King means when he says: ‘We have to move rapidly, what we do in the next three to four years will determine the future of humanity. Unless we make the transitions necessary, we are going to lose what we understand by our civilisation over the coming decades’,” the spokesperson said.

“We have a responsibility to the next generation to keep going until we get a meaningful statement from the government that we can trust. We hope that our sensible plan to start the process of decarbonisation in the UK will be considered as it gives best value for money on reducing emissions, will create hundreds of thousands of meaningful jobs and start to bring millions out of fuel poverty as we go into a fuel crisis. It’s win win. Why doesn’t Boris get on with the job?”
#Boris Johnson  #Priti Patel  #Johnson
Add Comment