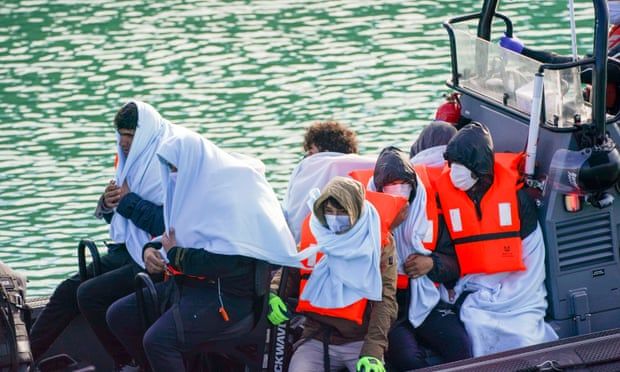 Afghans seeking refuge in the UK who arrive on small boats from across the Channel will be treated the same as any other migrants who enter the country by the same means, the home secretary has suggested.

Priti Patel appeared to confirm there would be no exception made for those fleeing the Taliban who used “irregular” routes to come to the UK, saying people allowed to resettle in Britain would have to come through one of two schemes.

The first is the new programme launched overnight, which the government says will allow 20,000 Afghan refugees to come to the UK over the next five years and “start a new life in safety”. It will run separately to the Afghan relocations and assistance policy (Arap), launched in April, which offers relocation for those who helped British operations in Afghanistan.

Meanwhile, officials confirmed that the Home Office would waive visa requirements for some Afghan citizens to allow them to come to the UK “on compelling and compassionate grounds”.

Applying for a visa to come to the UK can be a long, difficult and expensive process for Afghan nationals, with Covid and the closure of visa processing centres in the region because of the deteriorating security situation causing difficulties even before the Taliban took control of the country.

Patel said the aim of the new resettlement system was not to “criminalise” Afghan refugees. But when asked on BBC Radio 4’s Today programme whether they would be treated any differently from other migrants arriving in the UK on small boats, she said: “They will claim asylum in the way in which people who enter our system are currently claiming asylum.”

‘Where is global Britain on streets of Kabul?’: Theresa May blasts UK failure in Afghanistan

The UK’s chief of the defence staff, Gen Sir Nick Carter, said the Taliban were cooperating with British troops around Kabul airport and were not behaving in “a medieval way”. “They are keeping the streets of Kabul very safe and indeed very calm. They are helping us at the airport,” he told Sky news.

He said he did not think the Taliban “want to become international pariahs again”, adding: “I do think that they have changed.”

Patel said France “needs to do more” to ensure people claim asylum there rather than continuing to the UK and prolonging their “dangerous journeys”.

While the government’s new resettlement programme has been roundly welcomed, charities have said it will come too late to help those in urgent danger.

Steve Valdez-Symonds, refugee and migrant rights director at Amnesty International UK, said the programme was “unforgivably slow” and not “focused on the most immediate emergency for people at risk in the country”. He asked: “And what, meanwhile, about Afghans who make their own way to the UK to seek asylum or who are already here? Will they still be vilified and criminalised by the government’s draconian new asylum measures?”

Tim Naor Hilton, the chief executive of Refugee Action, said Afghans arriving in the UK through routes other than the resettlement programmes would “be met with punishment, not protection” under the nationality and borders bill – which he called the “anti-refugee bill” – making its way through parliament.

Patel also defended the number of people the government has said would be helped over five years, after criticism from people including former child refugee and Labour peer Alf Dubs.

Ahead of a five-hour debate in parliament, which has been recalled from summer recess and interrupted the holidays of the prime minister, Boris Johnson, and the foreign secretary, Dominic Raab, she said: “We cannot accommodate 20,000 people all in one go.”

Patel could not clarify whether it would be weeks or months before the first people to be resettled under the new programme arrived in the UK. She said those accepted under the scheme would get housing, welfare support and job and employment help, allowing them to start a new life in the UK permanently.

A Home Office spokesperson said: “Requests for a visa waiver are passed from the [Foreign Office] to Border Force to rapidly assess, and all cases are considered on their individual merits. This approach is in line with standard procedures for visa waivers in a crisis scenario, which can be issued to allow individuals into the country on compelling and compassionate grounds.”