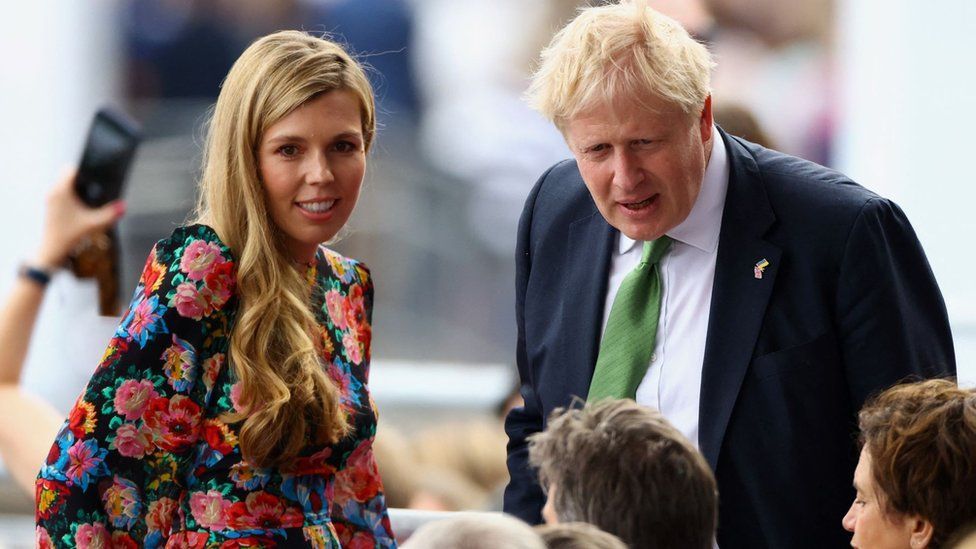 Boris Johnson's bank holiday weekend hasn't involved much downtime. The prime minister attended a number of events to mark the Queen's Platinum Jubilee - including the service at St Paul's, where he was booed by part of the crowd.

He's also been putting the finishing touches to a major housing policy speech, pencilled in for Thursday, which will see his own answer to help-to-buy as its centrepiece.

Mr Johnson wants us all to know he wants to get on with the job. But in between attending jubilee parties, many Tory MPs have been plotting.

And within days, some believe the PM will be engaged in a fight to stay in office.

All eyes will be on Sir Graham Brady when Parliament returns on Monday. He is the chairman of the 1922 committee - the shop steward for Conservative MPs.

If 15% of the party's MPs - 54 of them - write letters or emails to him calling for a confidence vote in the prime minister, it happens.

Only Sir Graham knows how many have been sent in so far. That caveat cannot be overstated; nobody knows for sure what will happen over the next few days.

But, speaking to Conservative MPs this weekend, many rebels think the threshold will be reached within days.

"The expectation is that it will likely be next week," one critic of the prime minister told the BBC. "Colleagues have to make a decision - finally they will have to make their minds up."

A number of others echoed those sentiments. Within government, some concede a vote could be triggered in the coming days "by accident" - not because of well organised rebellion from a section of the party, but because enough disparate groups of MPs are fed up enough to submit a no confidence letter.

Since Parliament broke up for recess on the same day the full Sue Gray report was published, there has a been a growing number of MPs who have spoken out to say they think the prime minister should go. The BBC has 28 on the record saying so.

Privately there are others who are angry.

One MP said: "I know there are people who have put letters in who haven't said so publicly." Enough to definitely force a vote this week? "I don't know," they replied.

The BBC has spoken to a minister who is among those furious at the situation.

Boris Johnson is said to be "sanguine" about the prospect of a confidence vote in the near term.

And that is because if a vote happens, the bar to remove the prime minister from office is high. It would take a majority of Tory MPs - 180.

One of the rebels admitted to the BBC the most likely outcome of a confidence vote this week was a victory for the prime minister - but that Tory MPs couldn't sit on their hands any longer and wait for the next crisis before making a move.

Others think if a tipping point isn't reached this week, the best opportunity for rebels could come later this month, after the result of two by-elections triggered by Tory MPs standing down from Parliament.

There is a realistic chance the Conservatives will lose both Wakefield (a previous red wall seat that Labour will want to win back) and Tiverton and Honiton (a previous Tory safe seat in Devon, where many believe the Liberal Democrats are on course for another coup).

If the prime minister was seen to be losing in both the north and the south of England, it would likely lead to more of his MPs concluding he is no longer an election winner who can keep them in power.

One senior MP told the BBC: "If I was them, I would wait until the by-elections… I'd be surprised if it's this week."

There are other reasons why some Tory MPs may hold back this week. Firstly, the prime minister is protected from another confidence vote for a year after winning one.

That means Tory MPs wouldn't have another opportunity after the by-elections unless they change the rules.

Secondly, the expectation is that the prime minister would stay on even if he won the vote narrowly.

As one source close to the PM said this weekend: "His opponents should not underestimate this man's determination to do what he promised to do". He is not, they said, going to give up the keys to Downing Street easily.

The PM's allies are scathing of those plotting to bring him down. They argue his critics have no alternative plan, no obvious leader and no discernible strategy.

"It's a random bunch of discontented people who don't have a plan but want to blow up the joint".

The government should be focussing, the source argued, on the cost of living crisis, energy policy and the war in Ukraine. "I can't imagine anything more insane and self-indulgent than deciding a Conservative beauty parade trumps all of that."

But if it happens, we already have a sense of how the prime minister will try to win a confidence vote. Mr Johnson's allies argue he is the only one who can keep together the diverse coalition of voters that won the party a stonking majority at the last election.

"The north of England was voting for Boris… he is conscious of the support he still has and the massive mandate he won."

Another source added: "There is no alternative that doesn't blow apart the red wall. It's a huge decision for the party - if you get rid of him, you chuck the progress of the last few years in the bin". 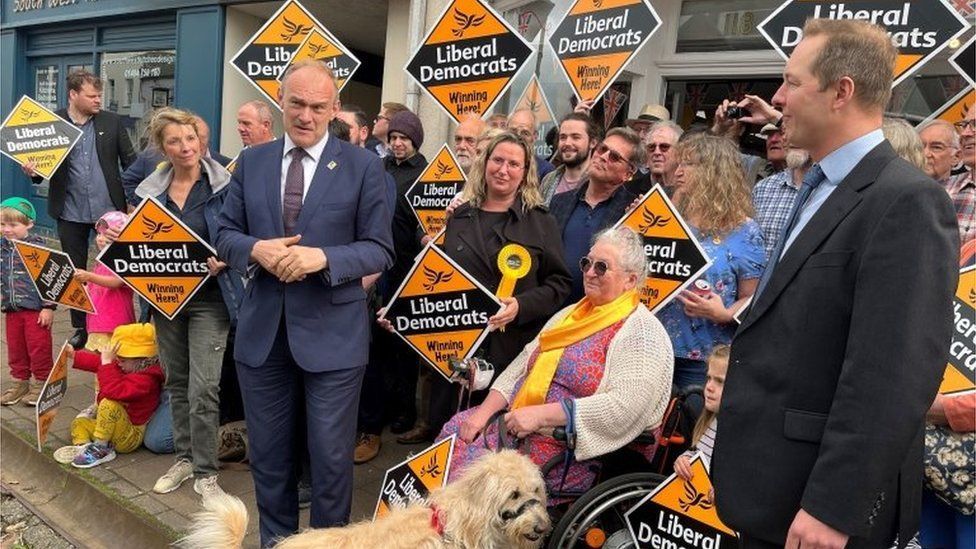 The Lib Dems are hopeful of success in Tiverton and Honiton

That is clearly not a view shared by many of his MPs. The prime minister's critics have spent the past week looking at polls - and concluding a change is needed.

Among the most despairing are those who have spent time on the doorsteps ahead of the by-election in Tiverton and Honiton.

One told the BBC the picture in the constituency was "appalling" with some voters saying they wouldn't back the Conservatives again without a change of leader.

There is no shortage of nerves among Tory MPs who could face a similar challenge at the next election - there are even some who have concluded they have no chance of winning their seat next time.

In the coming days or weeks, they will have a decision to make. Whether to act - or to keep the prime minister in office.

Will June be a moment of truth for the Conservative Party - or another damp squib in the long running leadership psychodrama? Many Tory MPs are weighing that up as the bank holiday draws to a close.

Watch: Boos and cheers for the PM as he arrives with wife Carrie
#Boris Johnson  #Johnson
Add Comment