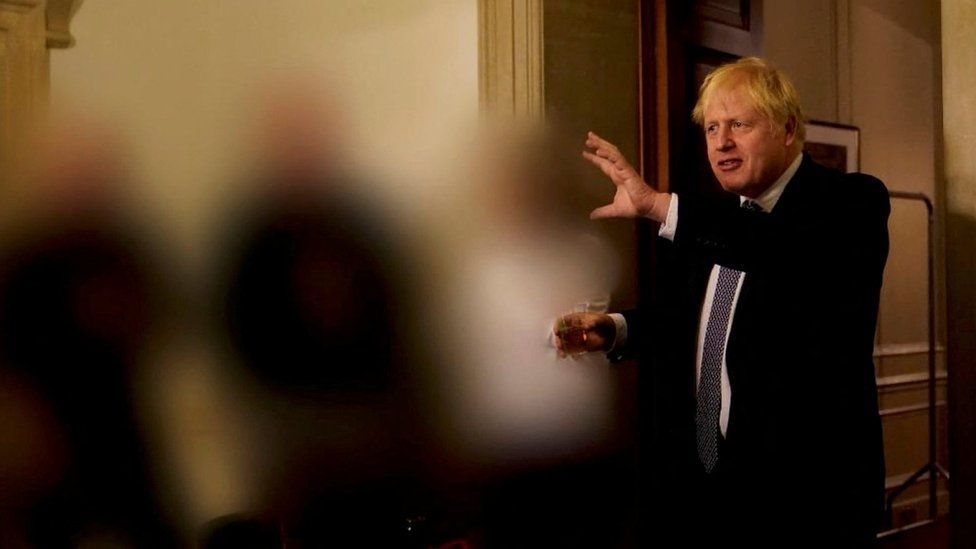 Partygate: Key official wrote 'We seem to have got away with it'

Messages and emails within Sue Gray's inquiry into lockdown gatherings in Downing Street have revealed senior officials both actively organising events and expressing relief at escaping scrutiny for them.

The report lays bare the extent of events at the heart of government with descriptions of excessive drinking, members of staff fighting and one vomiting, with a cleaner on one occasion finding spilled red wine on a printer the next day.

Here are some of the key messages relating to events included in the report, which investigated 16 events in government over the course of the pandemic.

'We seem to have got away with it'

Many messages are from officials who have been anonymised, but one name to feature regularly is Martin Reynolds - Boris Johnson's former principal private secretary.

In one WhatsApp message, he expressed relief officials had seemingly escaped notice over breaking the rules during an event on 20 May 2020 held in the Downing Street garden.

In the message to a special adviser, sent on an unknown date after the gathering, he wrote: "Best of luck - a complete non story but better than them focusing on our drinks (which we seem to have got away with)."

From an email included in the report, it is clear the event was organised by an email inviting staff to attend on 20 May, sent on behalf of Mr Reynolds.

It read: "Hi all, After what has been an incredibly busy period we thought it would be nice to make the most of this lovely weather and have some socially distanced drinks in the garden this evening. Please join us from 6pm and bring your own booze! Martin"

Mr Reynolds appears to have provided alcohol for the event, with one No 10 staffer thanking him for organising the drinks. In an email, the aide wrote: "A very kind thing to do and I know everyone really appreciated it."

Mr Reynolds replied: "Thanks - it was lots of fun and nice to chat with everyone."

'Not walking around waving bottles of wine'

After the invite was sent out for that 20 May event, when meetings outdoors were allowed with one other person, Mr Reynolds was warned by a special adviser via WhatsApp that a Covid press conference was due to end around the same time.

The aide wrote: "Just to flag that the press conference will probably be finishing around that time, so helpful if people can be mindful of that as speakers and cameras are leaving, not walking around waving bottles of wine etc."

Mr Reynolds replied: "Will do my best!…"

In a separate warning to Mr Reynolds, former No 10 director of communications Lee Cain warned via email that an event was potentially risky from a public perception perspective, given Covid rules at the time.

His email read: "I'm sure it will be fine - and I applaud the gesture - but a 200 odd person invitation for drinks in the garden of no 10 is somewhat of a comms [communications] risk in the current environment."

According to the report Mr Cain said he had later spoken to Mr Reynolds to advise him the event should not go ahead, although the latter did not recall this, while former No 10 aide Dominic Cummings has also claimed to have raised concerns in writing - although no evidence of this was found by the inquiry. 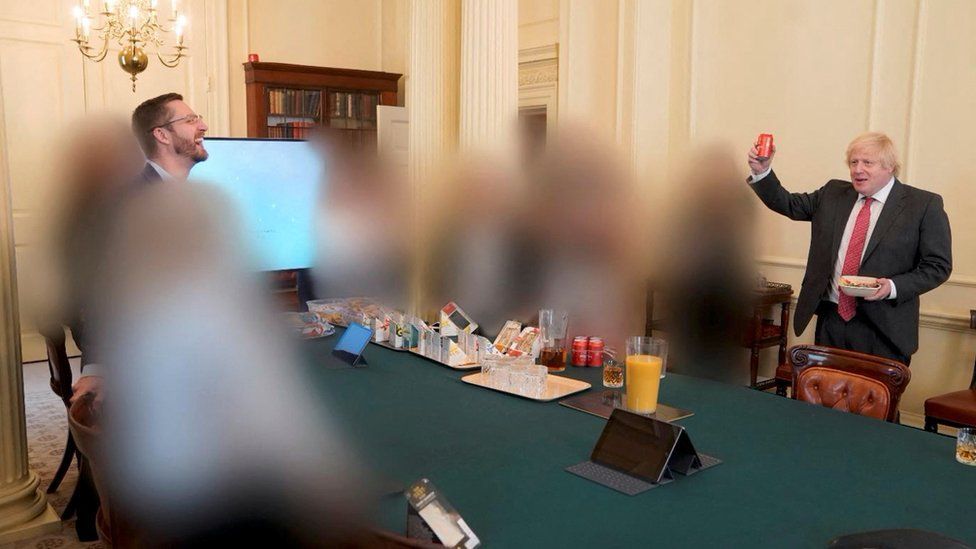 'Can we discuss handling?'

Other messages demonstrating pre-planning of events relate to a 2020 gathering that took place in No 10 and in the Cabinet Office to mark an (anonymous) official's departure.

Ms Gray's report reveals a staff member was sick and a "minor altercation" took place at the event, which lasted for several hours and included "excessive alcohol consumption".

Invites to the event were sent out on 11 June and one day later Mr Reynolds and Mr Cain were once again discussing the implications of holding the event.

Martin Reynolds: "[No 10 official's] leaving drinks next week - can we discuss handling!"

Lee Cain: "Yes - not sure how we want to do it but want to do something"

Martin Reynolds: "Is it safer to do a larger event indoors but with some people carrying on outside afterwards?"

Lee Cain: "I'm not sure it works at all to be honest, which would be a shame. I don't see how we can have some kind of party though"

Martin Reynolds: "So you are saying nothing for [No 10 official]?"

Lee Cain: "I think it's your decision my friend, not mind [sic]! But it obviously comes with rather substantial comms risks"

In subsequent emails to Mr Reynolds and his former deputy Stuart Glassborow organising the event, one No 10 official wrote:

"Hi Martin [Reynolds] and Stuart [Glassborow] would like to do speeches tomorrow when we have your drinks which aren't drinks. What time are we planning on the drinks?"

Subsequent email exchanges organised leaving speeches to take place in the Cabinet Room from 18:30 BST and then spilling out into the garden just over an hour later.

Discussing what to call the event on the invite one unnamed No 10 official said: "Well if we're doing it in Cabinet Room with a gap then to the actual drinks, I think we can more explicitly call it [No 10 official] goodbye or leaving speech, or something?"

The last member of staff, who stayed to tidy up, left at 03:13, according to Ms Gray.

Ms Gray's report also includes details about a Christmas event held on 18 December 2020 which had its event name amended to appear to fall more within the rules.

The original invitation sent on 3 December was titled "Wine & Cheese Evening", which was subsequently amended to "End of Year Meeting with Wine & Cheese" on the day of the event.

The report outlines further preparations for the press office event, which included Secret Santa and a quiz.

One message read: "We will do gift exchange and cheese and (lots of) wine on 18th Dec."

Ms Gray notes that a number of staff replied positively and discussed buying a fridge for the office.

One staff member wrote about the event: "£5 or so from everyone who wants to contribute would be fab - thanks team". Another wrote: "Done, Looking forward to a chilled WTF [Wine Time Friday] next week", while a second person noted "depending on how full it gets we can put Friday's cheese in there."

Plans for the event were set out in a WhatsApp group with people invited to "put out their cheese and Christmas treats" from 16:30, before the Secret Santa would take place at 17:00 with presents being handed out.

There would then be a quiz and games as well as a jokey speech.

The report describes the event as "crowded and noisy" enough that people working elsewhere in the No 10 building heard significant levels of noise which they characterised as a "party" and at one stage a panic alarm button was accidentally triggered.

A cleaner who attended the room the next morning noted that there had been red wine spilled on one wall and on boxes of photocopier paper.