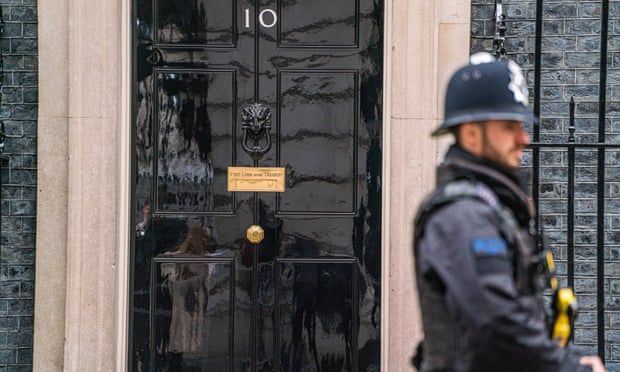 PM may get away with his rule-breaking but Labour and Lib Dems are still keen to force a confidence vote
When Boris Johnson takes to the dispatch box on Tuesday, for the first time in weeks, his allies will roar their support – an attempt to immediately dispel any questions about confidence in his leadership.

While the prime minister might appear at times contrite for breaking Covid laws during England’s first Covid lockdown, he is expected to maintain that at the time he did not believe he was doing anything wrong.

This defence is key to ensuring he cannot be found to have knowingly misled parliament when he proclaimed that no rules were broken in No 10, when stories of sloshed staff holding parties with suitcases full of wine and a DJ first emerged.

It is the “knowingly” that is most important.

Johnson will seek to brush the issue under the carpet, bat off calls to resign and urge MPs to focus on issues such as the war in Ukraine. He will inevitably be thrown lifelines by some supportive backbenchers. The matter will, inevitably, drag on.

On top of the ongoing Met police investigation and Sue Gray’s as-yet-unpublished report, opposition parties are also mounting an attempt to keep the spotlight on Johnson’s rule-breaking.

They are pushing for the Speaker, Lindsay Hoyle, to allow a vote on a debate about whether the prime minister should be held in contempt of parliament, potentially launching an investigation by the privileges committee into whether the Commons was misled.

This is a dangerous area for Johnson because the ministerial code that bears his signature is crystal clear that the price for misleading parliament is resignation.

While the text of any final motion has yet to materialise – and Hoyle will not deliver his ruling on whether to accept it or not until Tuesday at the earliest – Tory insiders admit the issue would be treated like a confidence vote.

But any vote will almost certainly be whipped, meaning the plan is doomed to fail even if it goes to a vote thanks to Johnson’s huge majority – barring a mammoth backbench rebellion.

One MP said they were considering voting against the government but knew that if they did so, they would be stripped of the whip and that would be the end of their political career.

“We have a reputation for being ruthless and brutal, which isn’t being lived up to at the moment,” they said.

There are those on the government’s side who also believe the move is premature, and that maximum damage would in fact be inflicted if the issue was left hanging unresolved in the run-up to next month’s local elections to inflict maximum damage.

Opposition parties are also sceptical about the chances of any investigation being able to use any evidence to prove Johnson misled parliament. “It’s not clear how we’d show that intent was incontrovertible,” a source said.

Both Labour and the Liberal Democrats are still keen to force the vote given the awkward timing for the Conservatives, with midterm local elections less than a month away.

Online adverts are being worked up to target voters in key areas where Tory MPs who may not want to offer Johnson their public support will be forced to back him.

While the government will certainly still win, it is another uneasy echo for some Tories of the downfall of Theresa May, whose administration was found in contempt of parliament less than four years ago.
#Boris Johnson  #Johnson  #Covid
Add Comment