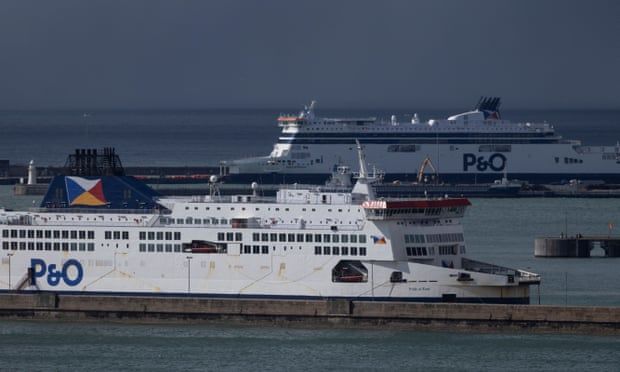 P&O Ferries has ‘got away with it’, say unions as Shapps backtracks on action

Two-week battle to hold company to account for sacking of 786 crew members appears to end with a whimper
A two-week battle to hold P&O Ferries to account for the summary sacking of 786 crew members appears to have ended with a whimper, as unions said the Dubai-owned company had “got away with it” after ministers backtracked on legal action and all but one employee accepted the firm’s controversial payoff ahead of Thursday’s deadline.

All of P&O Ferries’ crew working on British contracts issued out of Jersey were fired on 17 March, to be replaced by cheap agency workers. The firm gave the sacked workers a deadline of 5pm on Thursday to accept or forfeit a payoff which they said compensated for the breach of their employment rights.

The firm said by early Thursday afternoon all but one crew member, who could not be identified, had joined their redundancy process. The offer included a gagging clause prohibiting sacked crew from discussing P&O or taking further legal action. The promised payouts are understood to be higher than staff could have won had they sued at industrial tribunal.

While the government unveiled proposals to tighten up maritime employment law this week, including legislation to make all ferries serving UK ports pay minimum wage, there was growing disillusionment over potential enforcement action.

A spokesperson for the Nautilus union, which represented around a third of the sacked crew, said: “P&O has gotten away with it. There’s no fine, there’s no legal action, there’s only words and hot air.”

They added: “What we’re really after now is systemic change so this can never happen again.”

Ministers have ignored calls from MPs to use other sanctions, such as excluding P&O Ferries owner DP World from the running of new freeports in the UK.

The Dubai-based group stands to benefit from around £50m of tax breaks by playing a leading role in establishing two freeports at London Gateway and Southampton.

Labour has also demanded answers from the Foreign Office over a $720m (£548m) investment in DP World ports in Africa, using development aid money. Shadow minister Preet Kaur Gill wrote to Liz Truss to raise Labour’s concerns about using “taxpayers’ money to subsidise the business of a company that has treated British workers with such contempt”.

The RMT union vowed to continue the fight but a spokesperson said sacked P&O Ferries members “had a gun to their head” as the Thursday deadline passed, as they could lose all redundancy pay.

Ministers had encouraged individual employees to take the firm to a tribunal, but the government has backed away from its own pledges of legal action after P&O chief executive, Peter Hebblethwaite, admitted deliberately flouting employment law.

Last week Boris Johnson told parliament: “We will take them to court, we will defend the rights of British workers … P&O plainly aren’t going to get away with it.”

However, on Wednesday, the transport secretary admitted: “The government are not in a position to take court action.”

The business secretary, Kwasi Kwarteng, had originally warned P&O that it could face an unlimited fine, after asking the Insolvency Service to investigate. A government spokesperson said on Thursday: “No decision has been taken yet but we will not hesitate to take further action if we find evidence of wrongdoing.”

Labour said the government’s stance was “bewildering”. The shadow transport secretary, Louise Haigh, said P&O escaping without consequences would “give the green light to bad bosses across the country”.

Haigh added: “The government must throw the book at P&O Ferries. Their reluctance to use every tool at their disposal force to hold P&O Ferries to account is bewildering.

“Ministers must ensure the chief executive and those responsible are kicked out for their unlawful action, and explain why the legal action they promised to workers is not being taken.”

Mick Lynch, the general secretary of the RMT, said: “They have said they will take legal action against P&O and we’re holding them to it. Why do they think they are still fit and proper to have a public role in freeports or anything else? We think they should be sanctioned in the same way as Russian oligarchs have been sanctioned.”

While unions and many MPs remained supportive of the government’s proposals to address low pay in the sector, a long-neglected issue, there was growing disillusion as a crucial plank of Shapps’ plan was described as unworkable.

The transport secretary told parliament that the government would write to the operators of British ports telling them to refuse access to companies that did not pay the UK minimum rate.

However, the British Ports Association immediately warned that expecting port authorities to enforce such rules “could be unworkable” and would “place ports in a difficult legal predicament”.

The chief executive of Major Ports Group, Tim Morris, told the BBC Today programme: “What’s being proposed here is quite different from normal good practice … a specific legal duty, a liability, to ensure that another business is complying with employment law. We are not police, we are not enforcement agencies of the law.”

Sailings were not expected to restart on P&O Ferries passenger services out of Dover, Hull, Larne and Cairnryan for several days, with two vessels having failed inspections since the replacement crew boarded.
#Boris Johnson  #Johnson
Add Comment