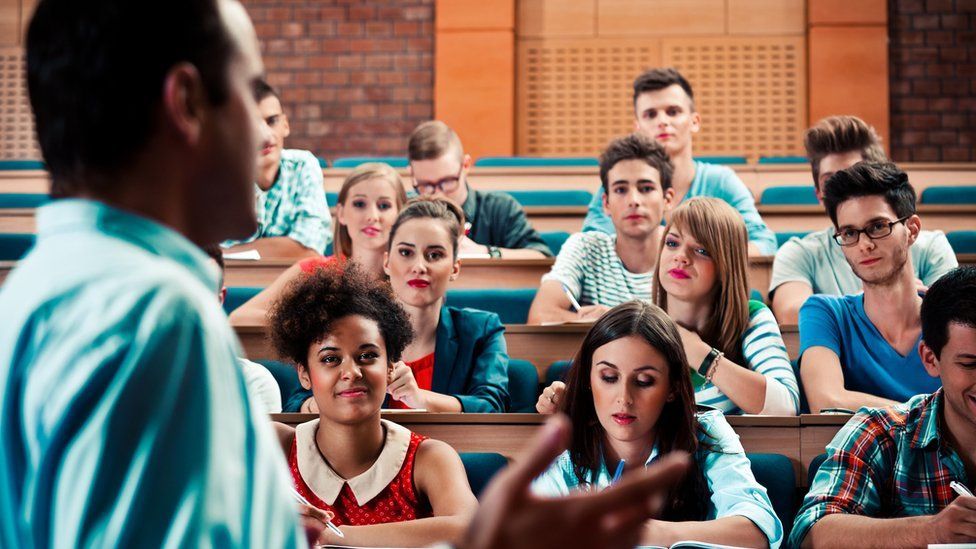 Students in England pay some of the highest tuition fees in the world - but that will not be sustainable if much of the teaching stays online, says an international education report.

Students will also expect the "social life of campus", says a report from the OECD group of industrialised countries.

The proportion of graduates in London's working-age population is 79% higher than the north-east of England.

Record numbers of UK students are going to start at university this term - and the annual report from the OECD says those in England will pay higher tuition fees for public universities - £9,250 per year - than any other developed country.

This doesn't include some of the prestigious private universities, such as in the United States, but OECD education expert Andreas Schleicher suggested that students at English universities will expect to have much more than online lessons for such high fees.

"I think this is going to be a real challenge," said Mr Schleicher.

"Students go to university to meet great professors, to watch with colleagues, to experience a social life," he told an event launching the report, which compares education systems around the industrialised world.

If too much of university life remained online, he said, it would fundamentally challenge the "value proposition" of tuition fees.

Universities had to put much teaching online during the pandemic - and last week the former education secretary Gavin Williamson warned universities that they needed to return to face-to-face tuition this term as much as possible.

Universities UK says the "vast majority" of teaching and socialising will be in person, but some large lectures might remain online for "public health reasons".

Among the decisions facing Mr Williamson's successor, Nadhim Zahawi, will be whether to go ahead with a tuition fee cut recommended by a government-commissioned review, which called for fees of £7,500.

The new education secretary will also be promoting the "levelling up" agenda - and the OECD report showed that there were much wider regional differences in the spread of graduates in England than in most developed countries.

In London's local economy, the proportion of the adult working-age population with a higher education qualification was 79% higher than in the north-east of England - one of the biggest regional divides anywhere in a leading economy.

This regional gap is going to get wider, according to Ucas admission figures for this autumn's intake. The number of young people going to university has continued to climb in London and the south of England, but is going down in the north.

The numbers going to university this autumn from the north-east are lower than in 2012, according to Ucas figures.

Mr Schleicher, OECD education director, said the gap reflected the differences in the availability of graduate jobs across the country - but said it was a "dangerous" problem which was a barrier to social mobility.

"Why would you study hard when there's no high-skilled employer around you?

"It means that there's a lot of unused talent, a lot of people who have actually great potential, but do not invest in their education because they don't see the purpose of it," he said.

The OECD education report also highlighted a need for more support in the UK for vocational education and the early years of education.

He linked these by saying that expectations about careers and future pathways had often already been shaped before children left primary school.

A spokeswoman for Universities UK defended the value of tuition fees.

"UK universities are world-leading, with the benefits of obtaining a degree here wide-ranging. Graduates in England earn on average £10,000 more per year than non-graduates, and this is only one measure of success.

"The structure of the system in England means that no student pays fees up front and repayments are made based on a graduate's ability to pay over their working life."