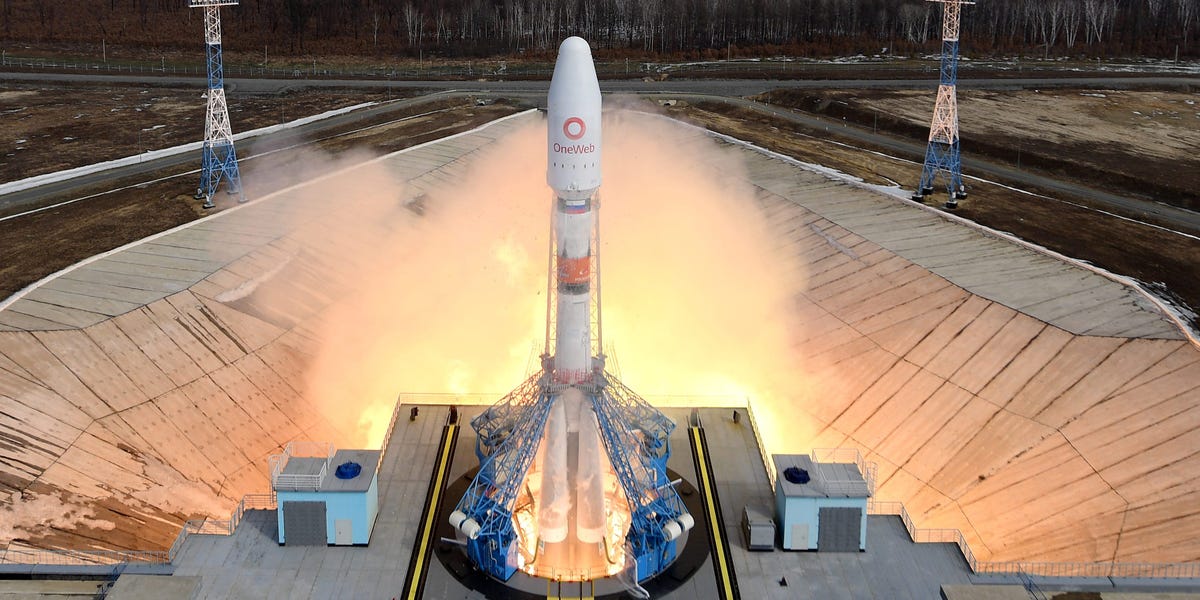 OneWeb, a new satellite company from the UK, is going head-to-head with SpaceX's Starlink to provide a global space broadband service

OneWeb exec Chris McLaughlin told Insider the number of satellites Elon Musk and Jeff Bezos want to launch in orbit is an issue.

The British-owned satellite broadband operator, which was rescued from bankruptcy by the UK government in November, wants to beam internet down to households and businesses across the world from satellites in orbit.

Across the Atlantic, SpaceX is planning exactly the same thing. The only difference is that Musk's company is way ahead of OneWeb. It currently has around 1,300 satellites at 550 kilometres in orbit and plans to launch 42,000 by mid-2027.

OneWeb plans to have 648 satellites at 1,200 km in orbit to provide a global service. The company's most recent launch on March 25 took it up to 146 satellites.

He told Insider that the main issue in the space industry right now is "the sheer number of satellites that Musk and Jeff Bezos want to put up."

Amazon-founder Bezos hasn't launched any satellites yet but aims to get a fleet of 3,236 in orbit in the near future for its Project Kuiper.

"[Musk and Bezos] both want to put them up in the same place at 550 km and have nobody else in their way," McLaughlin said.

Thursday's launch was the second out of five OneWeb launches this year to deliver internet coverage to the top of the globe down to the 50th degree latitude, according to McLaughlin. This includes Alaska, Canada, Greenland, Russia, the Nordic countries, and northern Europe.

The fifth launch will be in June, when OneWeb aims to provide broadband to the whole of the UK. By mid-2022, areas down to 21 degrees latitude will be covered, McLaughlin said, including the rest of Europe and parts of Africa.

Put in comparison with Starlink, which operates across six countries worldwide, OneWeb seems to lag behind. But the London-based company says its tactics are deliberately slower.

"Do you want the low Earth orbit completely messed up because of collisions between two billionaires satellites?" McLaughlin said. "Or would you prefer a more gradualist approach, like OneWeb is doing?"

The way that the big space companies are launching thousands of satellites is "not a responsible way forward for the next generations to be able to benefit from space," according to McLaughlin, who added that OneWeb is "adopting a more responsible use of space."

OneWeb works around a business-t0-business model — it delivers internet service to existing telecommunications companies who then distribute the internet to homes and businesses. OneWeb will leave the pricing for the telecom firms to set because "they know their customers best," McLaughlin said.

Musk's SpaceX, on the other hand, targets consumers directly with its satellite internet. So far, it's gained more than 10,000 users and already plans to connect moving vehicles, such as trucks and planes, to Starlink. Users can set up the $499 Starlink kit, including a tripod, a WiFi router, and a terminal, from their own home

"We are not going down the 'send you a box and tell you to install it' route," said McLaughlin. Instead, OneWeb users may have a wifi antenna mounted on their house, rather than a satellite dish.

Like Starlink, OneWeb could be part of the UK's government's $6.9 billion Project Gigabit internet plan, which aims to provide faster broadband to more than 1 million homes and businesses in rural areas of the country. SpaceX reportedly took part in discussions with a UK minister on March 22.

McLaughlin confirmed that OneWeb is also included in the plans for Project Gigabit and has "held ministerial and other discussions."

Neil Masterson said in an interview with CNBC on March 25 that the company "has been speaking to various elements of the government" and other organizations in the UK.

Now that the UK is joining the likes of Starlink, Amazon's Project Kuiper, and Canada's Telesat, McLaughlin said it's exciting for the British economy to have a slice of the space industry too.

"Who knew that Britain was in the space business?" he said.